If to a given mass (m) of a solid, heat is supplied at constant rate P and a graph is plotted between temperature and time, the graph is as shown in figure and is called heating curve. From this curve it is clear that 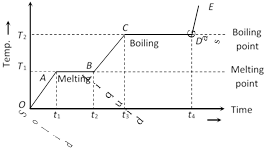 i.e. specific heat (or thermal capacity) is inversely proportional to the slope of temperature-time curve.

(4) In the region CD temperature is constant, so it represents the change of state, i.e., boiling with boiling point \[{{T}_{2}}\]. At C all substance is in liquid state while at D in vapour state and between C and D partly liquid and partly gas. The length of line CD is proportional to latent heat of vaporisation

(5) The line DE represents gaseous state of substance with its temperature increasing linearly with time. The reciprocal of slope of line will be proportional to specific heat or thermal capacity of substance in vapour state.