(1) Depletion region : On account of difference in concentration of charge carrier in the two sections of P-N junction, the electrons from N-region diffuse through the junction into P-region and the hole from P region diffuse into N-region.

(iv) The P-N junction diode is equivalent to capacitor in which the depletion layer acts as a dielectric. 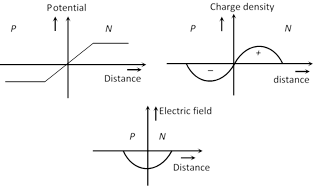 (4) Diffusion and drift current : Because of concentration difference holes/electron try to diffuse from their side to other side. Only those holes/electrons crosses the junction, which have high kinetic energy. This diffusion results in an electric current from the P-side to the N-side known as diffusion current \[({{i}_{df}})\]