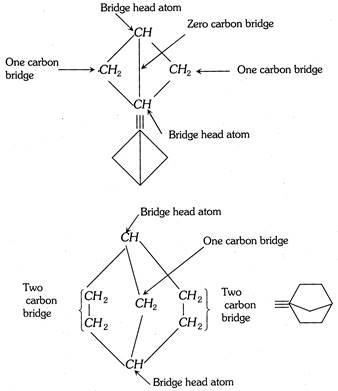 These bicyclic compounds are named by attaching the prefix 'bicyclo' to the name of the hydrocarbon having the same total number of carbon atoms as in the two rings. The number of carbon atoms in each of the three bridges connecting the two bridge head carbon atoms is indicated by arabic numerals, i.e., 0, 1, 2.....etc. These arabic numerals are arranged in descending order; separated from one another by full stops and then enclosed in square brackets. The complete IUPAC name of the hydrocarbon is then obtained by placing these square brackets containing the arabic numerals between the prefix bicyclo and the name of alkane. For example, 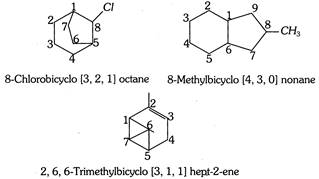