Organic compounds have been classified on the basis of carbon skeleton (structure) or functional groups or the concept of homology.

(1) Classification based on structure

These compounds are also called as aliphatic compounds.

(a) Homocyclic or carbocyclic : These are the compounds having a ring or rings of carbon atoms only in the molecule. The carbocyclic or homocyclic compounds may again be divided into two types :

Alicyclic compounds : These are the compounds which contain rings of three or more carbon atoms. These resemble with aliphatic compounds than aromatic compounds in many respects. That is why these are named alicyclic, i.e., aliphatic cyclic. These are also termed as polymethylenes. Some of the examples are,

Aromatic compounds : These compounds consist of at least one benzene ring, i.e., a six-membered carbocyclic ring having alternate single and double bonds. Generally, these compounds have some fragrant odour and hence, named as aromatic (Greek word aroma meaning sweet smell).

These are also called benzenoid aromatics. 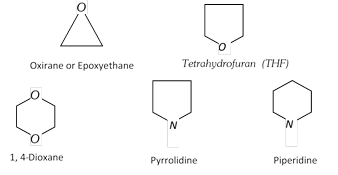 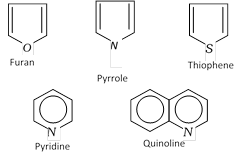 (3) Homologous series : A homologous series can be defined as a group of compounds in which the various members have similar structural features and similar chemical properties and the successive members differ in their molecular formula by \[C{{H}_{2}}\] group.

(iv) The members in any particular family have almost identical chemical properties and their physical properties such as melting point, boiling point, density, solubility etc., show a proper gradation with the  increase in the molecular mass.

(v) The members present in a particular series can be prepared almost by similar methods known as the general methods of preparation.

(4) Saturated and unsaturated compounds : If, in an organic compound containing two or more carbon atoms, there are only single bonds between carbon atoms, then the compound is said to be saturated, e.g. ethane, n-propyl alcohol, acetaldehyde etc.

On the other hand, if the compound contains at least one pair of adjacent carbon atoms linked by a multiple bond, then that compound is said to be unsaturated, e.g, ethylene, acetylene, vinyl alcohol, acraldehyde etc.