The extraction of a pure metal from its ore is called metallurgy. In order to extract the metal from ores, several physical and chemical methods are used. The method used depending upon chemical properties and nature of the ore from which it is to be extracted. It involves four main steps,

(1) Crushing and grinding of the ore.

(2) Concentration or dressing of the ore.

(4) Purification or refining of the metal.

(1) Crushing and grinding of the ore : Those ores occur in nature as huge lumps. They are broken to small pieces with the help of crushers or grinders. These pieces are then reduced to fine powder with the help of a ball mill or stamp mill. This process is called pulverisation.

Physical Methods (i) Gravity Separation or levigation: This process of concentration is based on the difference in the specific gravity of the ore and gangue. The sieved ore is either subjected to dry centrifugal separation or is placed in big shallow tanks in which a strong current of water blows. Heavy ore particles settle down to the bottom of the tanks while lighter gangue particles are carried away by the current of water. The process removes most of the soluble and insoluble impurities. For this purpose wilfley table and hydraulic classifier are widely used. The method is particularly suitable for heavy oxide and carbonate ores like Cassiterite (SnO2) and haematite.

(ii) Froth floatation process : In some cases for example, sulphides ores of copper, zinc and lead concentration is brought by this method. In this method advantage is taken of the preferential wetting of the ore by an oil. The finely ground ore is taken in a tank containing water and 1% of pine oil or terpentine oil. A strong current of air is blown through the suspension, producing a heavy froth or foam on the surface. The metal sulphide is wetted by the oil but the gangues is not and the sulphide-oil mixture is carried to the surface by films of oil The froth is skimmed off, the gangue settles down on the bottom or remains underneath the froth. By this floatation method it is possible to concentrate over 90% of a sulphite ore to 1/10 of its original bulk. 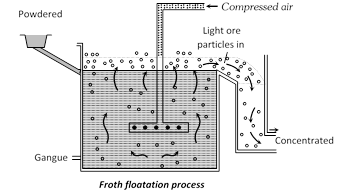 (ii) Activators and Depressants : During the floatation process of some ores, these substances are added which activate or depress the floatation property of the minerals and thus help in the separation of minerals present in the ore. For instance, galena (PbS) is usually associated with sphalerite (ZnS) and pyrites (FeS2). Concentration of galena is carried out by passing potassium ethyl xanthate (Collector) along with sodium cynamide and alkali (depressants) where by the floatation property of ZnS and FeS2 is depressed. Mainly PbS passes into the froth when air current in flown in, which is collected. After PbS is removed with the froth, same CuSO4 (activator) is added and air is blown. The floatation property of ZnS is increased which is now removed with the froth. The slurry is acidified and process is repeated when FeS2 passed into the froth and is collected. 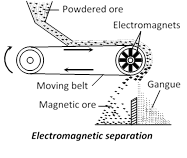 Chemical methods (i) Calcination : In this process the concentrated ore is heated in a suitable furnace generally in reveratory furnace much below its melting point in absence of air. As a result of which the ore dries up and moisture and volatile impurities are driven off and carbonates are converted into oxides and the ore becomes porous. For example,

(ii) Roasting : The process of heating the ores strongly in presence of air with or without certain substances, below its melting point is termed as roasting. It differs from calcination in the respect that heating is done in presence of air and at a higher temperature. In this process the impurities of sulphur and arsenic etc. are volatilized away as oxides and the ore is converted into oxide. For example zinc oxide is formed by the oxidation of zinc blende,

(iii) Leaching : It involves the treatment of the ore with a suitable reagent as to make it soluble while impurities remain insoluble. The ore is recovered from the solution by suitable chemical method. For example, the chief ore of aluminium, bauxite (Al2O3.2H2O) contains varying amounts of ferric oxides, titanium oxide and silica. Since alumina is amphoteric, it can be separated from the other two oxides. Finely powdered bauxite is digested with caustic soda solution at 150–170oC under pressure for some hours. Alumina dissolves forming soluble sodium aluminate.

The impurities remain unaffected and separated as insoluble red mud which is filtered off. The filtrate is diluted and some freshly precipitated aluminium hydroxide is added when Al(OH)3  is precipitated as follows,

The precipitated hydroxide is filtered off and calcified to get highly pure aluminium oxide (alumina).

Gold and silver are also extracted from their native ores by Leaching (Mac-Arthur forest cyanide process).

(3) Reduction to free metal : Some of the methods commonly used to get free metal from the concentrated ore are given below,

(i) Smelting : The process of extracting a metal in the state of fusion is called smelting. In this process the ore is mixed with carbon, obtained after the above reactions and heated in suitable furnace. A suitable flux is added during the operation to convert the non-fusible gangue to fusible slag. The metallic oxide is reduced by carbon and the metal may be obtained in the molten state or as vapours which are condensed. Metals like tin, zinc or lead are obtained by this process.

Flux and slag : Flux is a substance that is added during smelting to convert infusible silicons or earthy impurities into fusible material known as slag. Impurities + Flux = Slag. The slag is immiscible with the metal and has a low melting point and density. The slag floats on the metal and protects it from oxidation. It is removed from the furnance through the slag hole. If the impurities in the ore are acidic (SiO2) in nature, a basic flux e.g., CaO, MgO, FeO etc. are added; and if the impurities are basic (CaO, FeO, etc.) then on acidic flux (SiO2) is used. The gangue or matrix present in the ore is refractory or non-fusible in nature but it reacts with the flux forming fusible slag which does not mix with the molten metal and forms the upper layer. Slag are usually silicates.

(ii) Reduction by Aluminium (Gold-schmidt alumino thermic process) : The process of reduction is used in the case of those oxides which can not be easily reduced by carbon. In this process, metallic oxides ore are mixed with aluminium powder commonly called as thermite and placed in a steel crucible lined inside with a refractory material and ignited by magnesium ribon. By the use of this process a number of metals such as chromium and manganese are obtained on a commercial scale in highly pure state.

Large amount of heat energy is released during reduction, which fuses both the alumina and the metal.

(iv) Electrolytic reduction process : This process is used in the extraction of the alkali and alkaline earth metals, zinc and aluminium. The material from which a metal to be obtained is first smelted by heating and then electrolysed. Sometimes, some other salt is mixed to lower the melting point of the substance taken. For example,

(v) Precipitation or metal displacement method (Hydrometallurgy) : This method is used for extraction of metals such as cadmium, copper, gold and silver. A metal having higher electrode potential is added into the solution of a metal of lower electrode potential with the result that the latter is displaced or precipitated.

(vi) Amalgamation process : This method is used for the extraction of noble metals like gold, silver, etc., from the native ores. the finely powdered ore is brought in contact with mercury which combines with the particles of the metal present in the ore and form amalgam. The metal recovered from the amalgam by subjecting it to distillation, where the mercury distills over leaving behind the metal.

(iii) By liquation : This process is used for refining easily fusible metals like lead and tin. The impure metal is heated on the slopy hearth of a reverberatory furnace. The metal melts and flows down leaving the impurities.

(iv) By distillation : Some metals have very low melting point and soon vaporize on behind heating, while the associated impurities remains in the solid state. Zinc, mercury and arsenic are purified by this method. Vacum distillation gives very pure product and is used in the refining of the metals of IA and IIA Groups.

(v) By fractional distillation : This process is applied for the separation of cadmium from zinc. In the metallurgy of zinc, the metal is invariably associated with cadmium. The impure zinc is mixed with powdered coke and heated when the first portion of the condensate contain cadmium while zinc is obtained in the subsequent portions.

(vi) By thermal dissociation : In this process the metal is first converted into some compound which is then decomposed into pure metal by heating. For example, impure nickel is heated with carbon monoxide at 60oC  to form nickel carbonyl Ni(CO)4 which is then decomposed at higher temperature, 150-180oC to give very pure nickel. Sometimes iron is also purified by this method.

(b) Van Arkel process : This methods is generally applied for obtaining ultrapure metals. The impure metal is converted  into a volatile compound while the impurities are not affected. The volatile compound is then decomposed electrically to get the pure metal. Ti, Zr, Hf, Si etc., have been refined by this method.

(c) Zone refining or fractional crystallisation : Elements such as Si, Ge, Ga, etc., which are used as semiconductors are refined by this method. Highly pure metals are obtained. The method is based on the difference in solubility of impurities in molten and solid state of the metals. A movable heater is fitted around a rod of the metal. The heater is slowly moved across the rod. The metal melts at the point of heating and as the heater moves on from one end of the rod to the other end, the pure metal crystallises while the impurities pass on the adjacent melted zone. 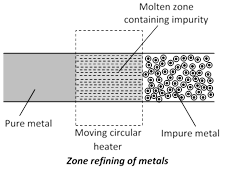 Summary of the Extraction of Metals