There is continuous transfer of energy between the various components of the biosphere. Both living and non living components of the biosphere constantly interact with each other for this purpose. The living organisms derive its nutrients from the earth for their growth and development, known as biogeochemical. These biogeochemical are constantly recycled and used again and again. The different biogeochemical cycles are: water cycle. Nitrogen cycle. Carbon cycle, and oxygen cycle. We will discuss about all these cycles in details below:

Water is considered to be one of the most important liquid for the survival of life process on the earth surface. The water constantly circulates between land, air, sea and living organisms and this is known as water cycle. 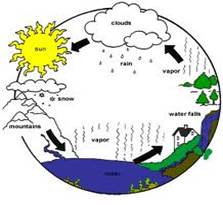 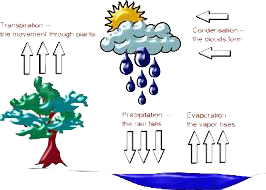 The heat of the Sun evaporates water from the water bodies. These water vapours go up in the atmosphere, cool down and gets collected as a cloud. These clouds, on condensations, turn into the small droplets of water. On getting heavier they fall back on the earth in the form of rain, snow or hails.

The leguminous plant like pea plant contains nitrogen fixing bacteria such as azotobactor and rhizobium in its root nodules. These bacteria converts atmospheric nitrogen into nitrates. When animals consume the plants, it breaks down the nitrogenous compound. When the animals or the plants die, some bacteria carry out ammonification and produce ammonium ions \[NH_{4}^{^{+}}\]. This process of formation of ammonia is called ammonification. Some of the microorganisms convert this ammonia into nitrates, again reduced back to nitrogen and released back into the atmosphere. This process is known as denitrification.

Carbon is one of the important constituent of all organic compound and are founded in almost all living organisms, in the form of carbohydrates, fats and nucleic acids. In atmosphere it is present in 0.03%. Plants use atmospheric carbon for the process of photosynthesis, in the form of its oxides and releases oxygen into the atmosphere. This oxygen is used by the animals for the process of respiration, which in turn release carbon dioxide back into the atmosphere. 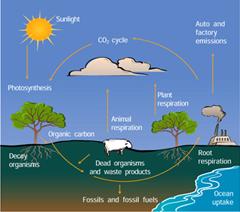 The other way round in which carbon cycle is formed is that, all the living organisms is constituted of major parts of carbon. When these animals and plants die, their bodies are decomposed by the microorganisms into simpler form and releases carbon to the atmosphere, either in the form of carbon or the oxides of carbon, like carbon dioxide or carbon monoxides.

The organisms which eat other organisms or particulate organic matters are called:

Which one of the following is a micro consumers?

Match the column A with column B in the table given below:

Which one of the following statements is false?

Statement 1: Coal and petroleum are not natural resource.

Statement 2: We have to look for alternate sources of energy due to rapidly depleting natural resources.

(d) Both are false