A computer network is a group of computers that are interconnected to share information and resources. The first networks were implemented by both IBM's SNA Systems Network Architecture) and Digital's network architecture. Internet is the biggest example of computer networking. Through Internet you can send email or file to any location in the world. While developing computer network, you need to use communication devices, such as modem and router. Basically, communication devices are usefull to send and receive data on the network.

Network means connecting with each other. Computers form network for sharing information and resources.

LAN is commonly known as Local Area Network. It is used to connect the computers - --d other network devices so that the devices can communicate with each other to share the resources. The resources to be shared can be a hardware like printer or a software like an application program or data. The size of LAN is usually small. The various devices in LAN are connected to central devices called Hub or switch using a cable. This network is limited to a relatively small area, such as a classroom, a school or a single building. This type of network has the lowest cost.

v  All network users can save their data on hard disk of the server computer.

v  Support for heterogeneous forms of hardware and software.

v  Equipment and support can be costly.

v  Some types of hardware may not interoperate.

v  A good LAN is required to be on all the times.

v  A lot of times a network shares one internet connection only. If many computers are running at once, it can reduce speed for each. 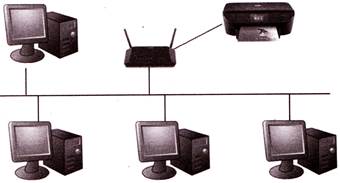 WAN is also called Wide Area Network. It is a telecommunication network. A Wide Area Network is simply a LAN of LANs or Network of Networks. It connects LANs which could be on opposite sides of a building, across the country or around the world. WANs are characterized by the slowest data communication rates and the largest distances. Computers connected to a WAN are often connected through public networks, such as telephone system. The largest WAN in existence is the Internet.

v  It covers a very large geographic area, like a country or long distance businesses can connect on the one network.

v  The speed of WAN is very high.

v  Messages can be sent very quickly to anyone on the network.

v  The bigger the network the more expensive it is.

v  The cost for equipment and technology is very expensive.

v  It is difficult to maintain the network.

MAN is generally known as Metropolitan Area Network. It is designed for a home or a city. In terms of geographic breadth, MANs are larger than local-area networks (LANs), but smaller than wide area network (WANs). MANs are usually characterized by very high speed connections using cable or digital media.

v  It provides larger and controllable computer network than LAN and WAN.

v  It has lower implementation cost than WAN because it requires very less resources as compared to WAN.

v  The overall installation and management cost is high.

v  As compared to LAN, it requires more cables for connection from one place to another.

The main advantage of a client-server networking system is that you can perform administration or configuration of your entire network from a single location. The capacity of clients and servers can be increased separately.

A switch is a connecting device that is used to develop computer network. It contains multiple ports that allow connecting more than one computer. Switch increases the network speed. It is faster than the bridge because it only looks at destination address. Bridge is also a device which is used for connecting computers. Switches are more expensive than bridges.

A Router is also a network connecting device. The main difference between switch and router is that router decides the best path for data transmission from source to the destination. Router also increases the network speed.

Workstation is a computer which is designed for technical or scientific applications. The term workstation has also been used to refer to a mainframe computer terminal or a personal computer connected to a network.

A workstation may have the following features:

The NIC (Network Interface Card) is also called Ethernet Networking card. It is a circuit are equipped with microchips that is physically installed within an active network node, such as a computer, a server or a printer. It enables to connect your computer with network.

Internet is a global network. Basically, Internet is a type of WAN that uses TCP/IP protocol. Protocol is a set of rules. If you want to use the Internet on your PC, you need an Internet connection and a browser. There are number of browsers available in market, such as Internet Explorer and Mozila firefox. Browser is a software that enables a GUI to open a Website.