Have you ever heard or recited the Gayatri Mantra? It is from the oldest text in India called the Rigveda. There are four Vedas. The Rigveda is the oldest among them. The Vedic Age is the period during which the Vedas were composed. This period from 1500 BCE to 600 BCE, is often called the Vedic Age.

Earlier, we have read about the Harappan Civilisation. Slowly it declined and by around 1800 BCE, people again began living a simple life in villages. About this time, some people entered India from the north-west. They called themselves 'Arya' meaning 'noble ones'. A new culture developed in India with the arrival of the Aryans. They did not come to India to invade and plunder and go back. They settled down in the plains and took to agriculture. They first settled in seven places in the Punjab region which they called Sapta Sindhu. These Aryans who settled in India are called Indo-Aryans.

Our knowledge of the Aryans comes from the Vedas. The Vedic Age gets its name from the four Vedas. Historians have studied these texts carefully. They provide an insight into the life of the Vedic Age.

The Aryans spoke a language called Indo- European which was the ancestor of Sanskrit, Assamese, Gujarati, Kashmiri and many other foreign languages like Latin, Greek, German and Persian. Similar words exist in all these languages. In India, the languages used in the north-east belong to the Tibeto-Burman family. Tamil, Telugu and other languages of the sout belong to the Dravidian family.

The oldest Veda is the Rigveda. It was composed about 1500 BCE and is a collection of 1028 hymns written by rishis. These hymns are in praise of various gods and goddesses. These hymns were considered sacred. For hundreds of years, the Rigveda was passed down by word of mouth. Finally, it was written down in Sanskrit. The other three Vedas were written later and tell us about the Later Vedic Age. 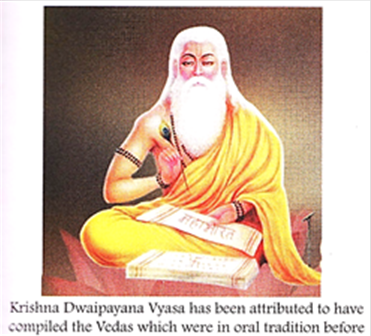 The period when the Aryans first entered India is known as the Early Vedic Age (1500 BCE to 1000 BCE). The chief source of information about this period is the Rigveda.

The kingdom was tribal in character. The tribal chief was called rajan. He ruled over the people (jana) and not over any specific area of land. His position was not hereditary. He did not live in any palace and did not collect regular taxes. His main function was to protect the people and lead the army to victory in battle. Battles were fought for land which was essential for agriculture and for pastures for the cattle. He used to receive a large part of the booty collected in battle. He was also called gopati (Lord of Cattle) indicating that protecting and increasing the cattle was his other major role. He received from the people a voluntary offering called ball. The king did not maintain a standing army. The king's power as kept in check by assemblies such as sabha and samiti. The king dispensed his duties with the help of the purohita (religious advisor) and senani (army chief).

Q. Why was the king called gopati? Why were cattle so important?

Women were treated equally and were allowed some choice in the selection of their husbands. They received education also. Child marriage and sati1 did not exist and widows were not treated badly. Women participated in the sabha, rituals and even chariot races.

The Rigveda has many hymns composed by women and there are references to women sages.

The Aryans did not have any fixed territories and they moved from place to place with their cattle and horses. As they began to settle down, they began to practice agriculture. Cattle were the most-valued possession and chief form of wealth. Besides agriculture and cattle rearing, there were many other professions. People were also engaged in trade.

Ships were also used by the Early Vedic people. The Rigveda speaks of '?ships with a hundred oars?.

People worshipped the forces of nature. Much of the Rigveda is full of prayers for these deities. The important gods were Indra, Varun, Surya, Vishnu, Vayu and Yama. Some goddesses were Usha, Savitri and Prithvi. Their favour could be won by sacrifices. They did not make temples or idols. They worshipped through prayers and chanting Vedic mantras. 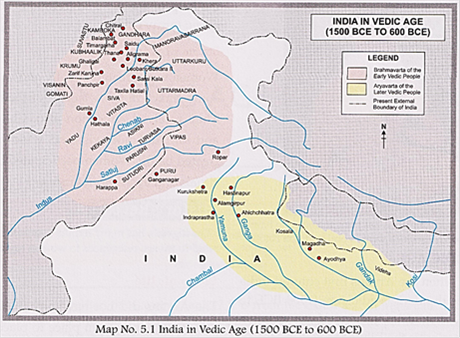 The period between 1000-600 BCE is known as the Later Vedic Age. We know about this age through the books that were composed during this period.

Samaveda: It is a collection of musical verses from the Rigveda.

Yajurveda: This contains mantras and rituals for sacrifice.

Atharvaveda: This contains chants to cure diseases and ward off danger.  The epics, Mahabharata and Ramayana, were also written during this age. They tell us about the political and social setup of that period and are considered religious texts. This age is also called the Epic Age because these two great epics were written during this period.

Each tribe now occupied a fixed territory which as named after the tribe. Tribes often fought over territories. The term rashtra which indicates territory first appeared in this period. The king became very powerful and his position became hereditary. He lived a luxurious life in a palace. He received regular taxes in the form of food grains or cattle. He appointed officers to collect taxes. He maintained law and order and all major decisions were taken by him. The sabha and samiti assisted him but did not curtail his power. He performed various sacrifices to prove his strength and power.

There was a drastic change in the position of women. They were not educated or allowed to read the Vedas. They no longer participated in the sabha. Child marriage and sati came into existence and widow remarriage was strongly opposed. The women were supposed to be under the control of her father and later her husband.

The caste system developed gradually. The Aryans made the defeated dasas do unpleasant work. Division was created between the dasas and the fair-skinned Aryans. The dasas were given the name shudras and were not allowed to take part in any Aryan ceremony. Hence the caste system consisting of the four castes came into being-the brahmins, kshatriyas, vaishyas and the shudras. We will be learning more about the caste system in the later chapters.

New gods were worshipped. Prajapati, the creator, was most important. He was later called Brahma. Shiva and Vishnu were also worshipped. Idol worship also began. Sacrifices were performed to please the gods who then blessed the people.

Thus, the Aryans brought with them their customs and ways of thinking and influenced the lives of the natives.

The word megalith comes from the Greek words megas and lithos meaning 'great stone". Megaliths are large slabs of stone used to mark the burial sites. Numerous megaliths have been found in Karnataka, Andhra Pradesh, Maharashtra, Kerala, Kashmir and the north- east.

In a megalithic burial, the bones of a dead person were placed in an urn. This urn was buried and surrounded by a circle of large vertical stones. A large horizontal stone formed the capstone. 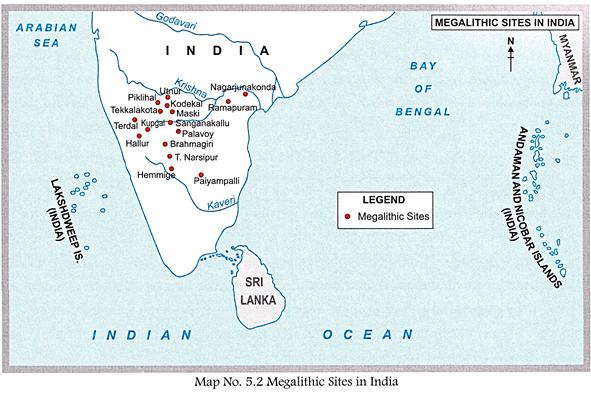 Unlike the Neolithic burials which were in the habitation area, megalithic burials were away from the occupation area. Grave goods like pottery, ornaments and weapons were also found. Pottery was of black and red variety. Weapons consisted of iron axes, spades and daggers. Ornaments were made of carnelian and gold. Some copper objects were also put in the grave. Sometimes horse skeletons and equipment were also found. The number of grave goods probably depended on the status of the person. The presence of these goods is indicative of their belief in afterlife. Some graves have skeletons of more than one person. This is suggestive that probably people from the same family were buried in the same place. The people who died later were got in through portholes.

Megaliths were built with great care and must have been an important part of the lives and beliefs of the people who constructed them. 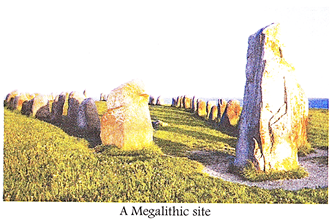 Inamgaon is a village in Pune district of Maharashtra. It is located near the River Ghod, a tributary of River Bhima. It is said to have been occupied from 1600 BCE to 700 BCE.

Houses here had fire pits. The pottery was fine, well-baked and designed. A pottery kiln has also been identified. There was an increase in farming and animal domestication. They cultivated grams, beans, peas and lentils apart from wheat, barley and rice. Fruits like berries and dates were also collected.

Bones of animals have been found. These bones have cut marks which are evidence that animals were also used for food.

The adult dead bodies were mostly buried away from the abitation site. Sometimes the burials were in the houses. The dead body was laid out straight, with the head towards the north. A number of burial goods including pots, ornaments and tools were also buried with the dead person. Multiple burials have also been found. In some graves, more than one skeleton and the absence of burial goods indicate that there was probably a large scale killing because of which burial goods were not enough for all the graves. In one large house which had a granary, one man was found buried in a cross legged position in a clay jar.

Q. Why do you think Inamgaon was located near a river?

During the Shang Dynasty (1600-1046 BCE) in China, seers4 used bones or shells of tortoises for reading oracles5. They inscribed a question which they wanted to ask on the oracle bone. The bone was then heated. The cracks formed in the bone were studied and interpreted. Archaeologists have found thousands of oracle bones and shells in China. Oracle bones of the Shang Dynasty were ox scapulae and plastrons6 only. They had characters and holes drilled into them. 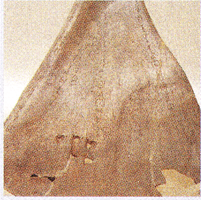