1.            The period when man started practicing agriculture from being a hunter-gatherer is known as the Neolithic Revolution.

2.            At this time, man also learnt to keep animals. They began to tame lots of different animals and eventually they started keeping herds of sheep, goats and cattle. Animals were also a source of food.

3.            Slowly, the wandering lifestyle changed and they built huts near water sources.

4.            Archaeologists have found evidence of farmers and herders all over the subcontinent. So, we know that a variety of crops were grown and animals were domesticated.

5.            They made tools called celts which had edges that were sharpened by grinding.

7.            Mehrgarh provides the earliest evidence of transition from hunting and gathering to agriculture and animal domestication.

In September 1991, two German tourists, Helmut and Erika Simon, found a well-preserved dead body of a man who lived about 5,300 years ago He was discovered in a glacier of the Otztal Alps, near the border between Austria

Italy. He has been nicknamed 'Otzi the Iceman' after the valley of his discovery the body has been extensively examined, X-rayed, measured and dated. Analysis of Otz?s tooth enamel shows that he spent his childhood near the present village of Feldthurns, Italy. He had 57 tattoos, some of which were located on or near acupuncture points. Scientists believe that these tattoos indicate an early type of acupuncture. Items found with him include a copper axe with a\[ye{{w}^{1}}\]handle, a flint-bladed knife with an \[as{{h}^{2}}\]handle and a\[quive{{r}^{3}}\]of 14 arrows with\[viburnu{{m}^{4}}\]and dogwood5 shafts. Otzi is a natural mummy and belongs to the Chalcolithic Age.

As we already know, about 10,000 years ago, the climate became warmer. Warmer weather made life easier and population began to grow. People could not find enough food by hunting and gathering. They needed a new way to survive. Thus they started farming and animal domestication. The period during which man turned from hunting and food gathering to agriculture is so important that it is known as the Neolithic Revolution. It was a gradual process which took place over many centuries.

THE FIRST FARMERS AND HERDERS

Think of all the food we eat. It all comes from plants that are grown or animals that are reared. This was not so for early humans. At first, the early man used to collect the seeds of wild plants and ate them during the winter and early spring. Later on they realized that the seeds they picked could be sown in the ground. They planted seeds and watched them grow. Then they harvested the plants and removed the grain, fruit or vegetable. Slowly, they began farming.

Humans often domesticate plants and animals. The animals that are docile and gentle are the ones looked after. Gradually, these domesticated plants and animals become different from the wilder ones. The first animals to be domesticated were sheep and goat. Also, humans select those plants for domestication which are healthier, stronger and give big size grains. Their seeds are then kept and sown to get the same variety. The plants that were domesticated first were wheat and barley.

Domestication of animals and plants began about 12,000 years ago. Today, all the plants and animals we use for food are a result of the gradual process of domestication.

At this time, man also learnt how to keep animals. They first began to tame dogs. The dogs helped them to find and kill wild animals. Dogs guarded their shelters and protected them from wild animals. Humans also gave food to the gentle animals that came near their shelters. They began to tame lots of different animals and eventually they started keeping herds of sheep goats and cattle. They used camels and donkeys for riding and for carrying heavy things. Humans protected these animals from the wild animals.

HUMANS SETTLE DOWN- A NEW WAY OF LIFE

Slowly, the wandering lifestyle of hunting and gathering of the early humans changed and they began farming. The most important plants were wheat and rice. The farmers needed sunshine and water for their crops. Also, the crops took time to grow. They had to be protected from animals and birds. When they began to farm the land, they worked together and lived in groups. They built huts near water sources. Rivers provided them with water for farming and also fish for eating. They also learnt how to make the things required for farming, tools for tilling the land, baskets for gathering crops and pots for storing food. The first farmers used very simple tools such as sticks which they thrust into the ground to make holes and shallow channels for thrusting seeds.

One important invention of this period was the plough. The first plough was probably a bough with divided branches that could be pulled along the ground to turn the soil. The simple scratch plough was used in Mesopotamia in 4500 BCE.

Archaeologists have found traces of huts in some places. In Burzahom, in present-day Kashmir, they have found mud plastered pit dwellings. The pits have a few steps. Charcoal, ash and hearths made of stone or clay were found inside and near the mouths of the dwelling pits. This suggests that people also lived in the open at ground level probably during the summer months. 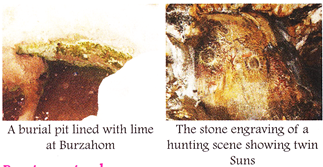 Rearing animals had numerous advantages. Goats and cows gave them milk. Also, animals multiply naturally. They killed the animals when food was required. So, they did not have to go hunting all the time. This meant that people always had meat to eat and milk to drink as well as fur and skin to make clothes. Thus animals provided for many needs of the Neolithic man.

WHERE THE FIRST FARMERS AND HERDERS LIVED

Archaeologists have found evidence of farmers and herders all over the subcontinent. Burzahom, Mehrgarh in north India, Koldihwa and Mahagara in central India, Daojali Hading in the east and Hallur and Paiyampalli in the south are some of them. In some places burnt grains have been found which have been identified. Bones of different animals have also been found and identified. So we know that a variety of crops were grown and various animals were domesticated.

The table below lists some of the sites where evidence of farming and animal domestication nave been found.

During this time, they began to make many diverse kinds of tools in new ways. Farming was difficult with the tools they had. They made tools with edges that were sharpened by grinding instead of flaking. These were called celts. These were polished tools. Mortars and pestles were made for grinding grains. Palaeolithic tools continued to be made. Tolls were also made forreaping and hoeing. Development of wooden tools was also important during this period. 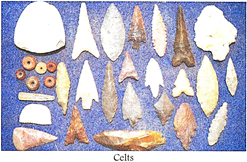 With effective food production, a whole series of crafts made their appearance. Pots and containers were made to suit different needs. Pottery was made by hand and baked in a bonfire. They made vessels to hold grain, bowls for eating and cooking. They knew how to select the right clay and mix it with the correct proportion of grit and straw to give the desired texture.

The wheel was probably invented around 7,000 BCE. Before its invention, logs of wood were used to roll heavy objects. This method permitted them to move heavy objects more quickly and competently and over longer distances. Wheels were first made by slicing the trunk of a date palm. It was used in carts for transportation and for the potter's wheel to make better pottery. Later, the spinning wheel also came into use. The earliest known use of the wheel was in the Mesopotamian civilisation. 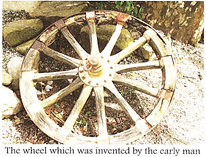 Q. - How far do you agree that the wheel changed the course of human civilisation?

LIFE OF THE PEOPLE

We do not know much about the lifestyle of the humans during this period. But historians believe that certain practices that are followed by present day tribes were probably followed by the earlier human societies.

Life in the Tribes

Usually the people of the tribe live in small settlements. Most of the families in the tribe are related to each other. The land or any other resources are owned by the tribe as a whole. All the people share the products and there is equal among all the people of the tribe. A strong and clever man becomes the leader. The tribes have their own customs and traditions, beliefs and gods. The tribal have many means of livelihood. They do farming and herding along with hunting and gathering. They also make baskets, tools and pots. The men usually take the animals to graze while the women are actively involved in farming. They till the land, sow the seeds and harvest, thresh, husk and later grind the gain. The children also help.

It is an important Neolithic site located near the Bolan Pass. Bolan valley was an important link between the Indus Plains and the mountains of Baluchistan. Excavations have given evidence of crop cultivation and animal domestication. It was a small farming village dated about 7,000 BCE to 5,500 BCE and it was occupied till 2600 BCE.

People here lived in mud brick houses with small rectangular rooms. They grew wheat and barley. The stone tools were microliths, mostly blades. Some lades were set in wooden handles. Handmade pottery and grinding stones were also found. They buried the dead along with many grave goods. The dead bodies were covered with red ochre and placed in a bent position in oval pits. Food was also put inside the grave. In some burials, young goats were placed along with the other grave goods. A ground stone axe has also been found. Possibly they believed in life after death.

Skeletons and bones of different animals have been found during excavation. At the lowest level bones of deer and pigs have been found. At the middle level, bones of sheep and goats and at the highest level, mostly cattle bones have

Thus, Mehrgarh provides the earliest evidence of transition from hunting a and gathering to agriculture and animal domestication.

This is a Neolithic site in north-east Assam. It is a deeply forested area. A number of stone implements like axes and adzes have been found here. The pottery excavated here is of grayish colour depicting basket-and-cord impressions on the exterior. Mortars and pestles have also been excavated. This is indicative that people cultivated food grains. Of special mention is Jadeite, precious stone found in China.

Around 3200 BCE, people in northwestern Europe built great cirles and lines of standing stones. They also stuck wooden poles into the ground to make circles called wood? henges? but most of these have rotted away. All these massive monuments were used in religious ceremonies. Some experts think that the mysterious circles were also used as giant outdoor calendars.

Stonehenge in southern England is the most spectacular of all stone circles. It was built in stages over a period of more than a thousand years and was finally finished around 1500 BCE

keyboard_arrow_leftNotes - The Lives of The Hunter-Gatherers