Notes - The Lives of The Hunter-Gatherers

The Lives of the Hunter-Gatherers

1.            The hunter-gatherers were the earliest humans on the earth. These early humans hunted animals and gathered wild plants for food.

4.            Different types of tools have been discovered. It took thousands of years before a stone tool changed its shape and was made more efficient.

6.            Striking paintings have been found on the ceilings, floors and walls of caves and rock shelters. The most common subject of the art was hunting scenes, which were beautifully and realistically depicted.

7.            The climate became warmer as the ice caps were shrinking. More grasses and trees grew and with them grew the number of grass eating animals. Early humans now began to think of rearing these animals.

Have you ever wondered how the earliest man on the earth looked like? Nobody knows for sure but researchers and studies by experts show that man evolved from apes. Then, over 5 million years ago, some apes in Africa learnt to walk upright. This was a long and gradual evolutionary process. It took millions of years before apes evolved into the 'modern7 humans of today.

THE EARLIEST PEOPLE AND THEIR WAY OF LIFE

The hunter-gatherers were the earliest humans on the earth. These early humans hunted animals and gathered wild plants for food. Their lives were not very different from those of other animals. They spent all day prowling about in the jungles and swamps, protecting themselves from other beasts and searching for food. Life consisted of collecting fruits, seeds, nuts, leaves, digging up roots, trapping animals and birds for food and killing them with stone tools. They had to take whatever nature offered them. Securing food was not easy. They had to be very alert, quick and strong. Gradually they learnt to distinguish which berries were poisonous, which parts of the plants were edible, which animals were easy to kill and how to catch fish in the rivers. They learnt to use tell-tale signs such as footprints and broken branches to hunt down animals. They studied the land and learnt where animals would gather or take shelter. Also, they learnt that bees made honey which was sweet. They could not stock food, so their food obtaining activities came to a halt when they had enough.

The life span of the early humans was short. Most perished before 35 years of age. The probable causes could be cold climatic conditions or diseases. 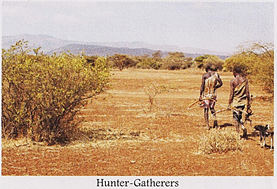 The hunter-gatherers were nomads moving from one place to another due to the following reasons:

·         Their movement depended on the availability of water in the rivers. When the seasonal rivers dried up, they moved to places where lakes or perennial rivers existed.

·         If they did not move, the plants and animal resources would finish off in that place. Thus, they had to move to other places in search of food.

·         They moved according to the seasonal availability of plants bearing fruits.

·         Animals moved in search of prey so humans had to follow them to hunt them for food.

In the time period we are studying about, early humans made tools mainly out of stone. Thus it is called Palaeolithic age. Palaeos means "old7 and lithos means 'stone'. It was a prehistoric time and extends from c.200,000 to 12,000

BCE. It is the longest part of the human past. It is further divided into Lower Palaeolithic, Middle Palaeolithic and Upper Palaeolithic. Many Palaeolithic sites have been discovered in India e.g. Chota Nagpur Plateau in Jharkhand,

The Mesolithic Period extends from 12,000 BCE to 10,000 BCE. Very small tools called microliths were made during this period. They were sharp and probably used to make spearheads, arrowheads, sickles and daggers. Microliths have been found near Narmada and Tapti rivers. Humans also learnt to make hooks and traps to catch fish and canoes from trees

The Neolithic age begins from 10,000 BCE. In this stage humans began farming. 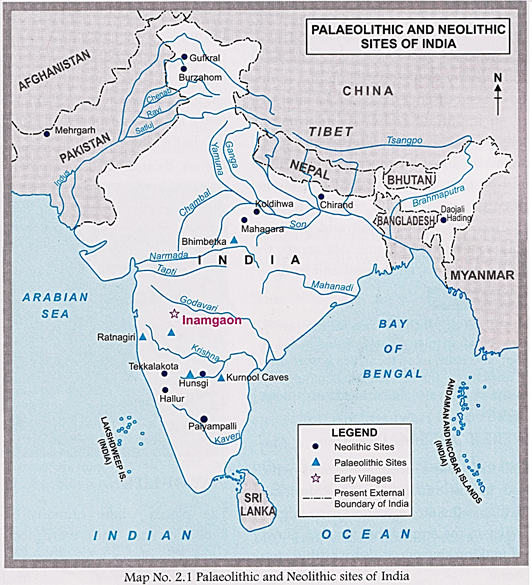 HOW DO WE KNOW ABOUT THESE PEOPLE?

The early humans made simple things using materials found in nature. They used wood, bones, stones, antlers, tusks and shells to make simple tools. Many stone tools belonging to this period have been discovered by archaeologists.

They are an important source of information. Also, there was advancement in the lives of the early humans because with the help of these tools they could perform some tasks easily and also protect themselves from wild animals. Making tools required time, effort, skill and patience. Stone tools were used to kill animals, scrape the animal skins, dig roots, chop meat and fruits.

HOW WERE TOOLS MADE?

The initial tools were probably stones which were used to kill small animals. Later, man observed that if the stone had a sharp edge, it caused injury to the animal that was hit. Slowly he started making sharper tools by hitting stone against stone.

These were made by hitting pebbles against each other, so that the broken bit had sharp edges. Though these tools were simple and crude, they were undoubtedly made by human hands.

Initially they made very large tools like hand axe, burin, scraper, chopper, cleaver etc. but later, lighter and sharper tools were made. Flake tools became smaller and lighter. Sharp and pointed stone flakes were grafted on wooden shafts to make spears. Harpoons made of bone brought fish in the diet.

It took thousands of years before a stone tool changed its shape and was made more efficient. Progress, however slow, did take place. 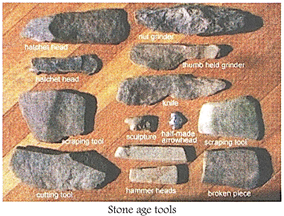 The places where humans lived are called habitation sites. These were mostly near rivers or lakes. The places where stone tools were made are called factory sites. These are located close to the source of raw materials and are marked by an abundance of stone tools in different stages of preparation. Sometimes people lived in the factory sites for very long to make tools. These sites are called factory-cum-habitation sites.

Q. Why were habitation sites near lakes or rivers?

Early humans lived in groups of about 30-50 people. These groups were called bands. By working together, they were able to hunt bigger animals like mammoths and bisons. They developed the idea of sharing tasks between men and women. The men did the hunting while the women collected edible plants. They lived in caves or rock shelters to protect themselves from rain, sun and wild animals. Sometimes, they made shelters using rocks, grass, leaves and even animal skins. They wore tunics by knotting animal skins together. Later on, they even began to sew animal skins to make clothes. They made needles from bones and thin strips of leather as thread. 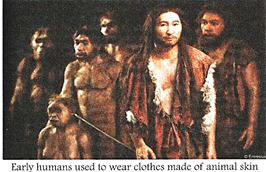 THE STORY OF FIRE

How was fire discovered? It may have been recovered from natural fire and maintained or it was the result of rubbing two stones against each other. Remains of ash have been found in Kurnool caves in Andhra Pradesh. This is indicative that the early humans knew how to use fire. Fire was very important. It kept them warm, gave them light and frightened wild animals away from their caves. Later, they learnt to cook the meat on fire. This made the meat tender and tasty as compared to uncooked meat. Also, cooked meat could be preserved for a longer period of time. 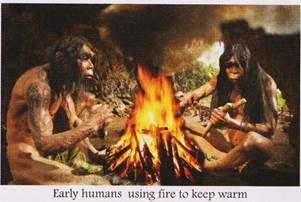 Striking paintings have been found on the ceilings, floors and walls of caves and rock shelters. The most common subject of the art was hunting scenes, which were beautifully and realistically depicted. Some of the best examples are from Madhya Pradesh and Uttar Pradesh.

Some historians are of the opinion that early man may have had certain religious beliefs which they thought would help them in their quest for food. These paintings may have been part of a secret ritual to make the hunt more successful. Another belief is that the paintings were a means of communication with each other. In India cave paintings have been found at Bhimbetka in Central India. They are in red & white and believed to be about 12,000 years old. They depict hunting scenes and animals, dancing scenes and scenes from everyday life. 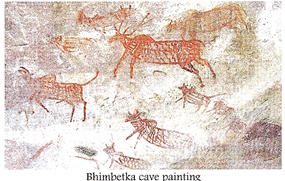 The first cave paintings were accidentally discovered by archaeologist V.S. Wakankar. He was travelling to Bhopal in 1957 when he noticed the Bhimbetka rocks from the window and went to explore them.

CHANGING LIFE OF THE HUNTER- GATHERERS

There was a gradual change in the climate and environment about 12,000 years ago. The climate became warmer as the ice caps were shrinking. More grasses and trees grew and with them grew the number of grass eating animals. Early humans now began to think of rearing these animals.

Grasses like wheat, rice and barley also grew in abundance. Gradually, humans learnt their growing patterns and then began growing them himself.

This is in modern day Karnataka. A village called Isampur is located here. There is evidence of Palaeolithic life here.  Many finished as well as unfinished stone tools belonging to this period have been found here. They were made using limestone and chert. The large number of tools found is suggestive of it being a major factory and habitation site in the Hunsgi Valley.

Cave paintings done by Palaeolithic man have been found all over the world. Almost 350 caves have been found in Spain and France. In 1940, near Lascaux in France, four teenage boys were looking j for their lost puppy. They accidentally discovered 17,000 year-old paintings and artefacts made by our early ancestors. Lascaux may be the most beautiful Palaeolithic painted cave in the world. It contains more than 1,500 pictures of animals. Initially, the caves were open to the public but the carbon dioxide breathed out by thousands of visitors every day had a detrimental effect on the painting. Also, the. Presence of lighting and changes in air circulation created a number of problems. The caves were closed to the public in 1963. In 1979, Lascaux was declared a World Heritage Site by UNESCO. 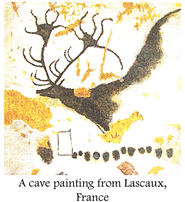 Notes - The Lives of The Hunter-Gatherers