1.            The Upanishads are philosophical texts. They have the ideas and teachings of the new thinkers.

3.            Buddhism is based on the teachings of Prince Siddharth. He achieved enlightenment and came to be known as the Buddha.

4.            According to Buddhist teachings, each person is born and reborn many times. The ultimate freedom from this wheel of life is a state where there is no suffering and is called nirvana.

6.            Mahavira strictly believed in non-violence. Jainism prescribes a path of non-violence towards all living things. Even trees and stones have a soul.

7.            Both Buddhism and Jainism established communities of monks and nuns called sangha to spread their teachings.

8.            Both Buddhism and Jainism became popular because they were against the caste system and did not believe in rituals and sacrifices.

In the Later Vedic Age, ceremonies and sacrifices became increasingly complicated. The caste system led to differences amongst the people. People were dissatisfied and began thinking. What was the meaning of all these rituals? What right did the brahmins have to claim themselves as superior to the rest. This spirit of enquiry prevailed towards the end of the later Vedic period.

Upanishad is a Sanskrit word meaning sitting down near a teacher to receive instruction. In ancient times, the pupils sat near the guru to receive knowledge from him. The Upanishads are part of the Later Vedic literature

During this time, there were many unanswered Questions in the minds of the people. They discussed who had created the world and why there was so much suffering in it. They wanted to know the truth about God and the world They thought about the purpose of their existence. They wanted to know the mysteries of life and what happened after death. The ideas and teachings of these new thinkers are collected In books known as the Upanishads.

WHAT DO THEY TELL US

The Upanishads are philosophical texts. They have been credited to many authors such as Shandilya, Aitareya and Aruni. Initially, they were passed down orally.

According to the Upanishads, Brahman is the universal spirit and atman is the individual soul. Brahma is the supreme God. He has no beginning and no end. He is omnipresent as the atman is in everyone.

The Upanishads are strongly opposed to rituals and ceremonies. They are centered around the soul and not sacrifice. According to them, the soul goes from one life to the next. The soul's happiness or sorrow depends on the past deeds or\[Karma{{s}^{1}}\]. It is the person's karma which determines his future and his next birth.

Most of the thinkers were men. But there were two prominent women thinkers Gargi and Maitreyi. They participated in a philosophic debate organised by King Janaka of Videha.

The word Jaina originated from the word Jina meaning 'the conqueror". The basic \[jenet{{s}^{2}}\] of Jainism were founded by Vardhamana Mahavira. He was born in 599 BCE. His father was the chief of the Jnatrika clan and his mother was a Lichhavi princess. At the age of thirty, he left home and wandered about as an ascetic for twelve years. He discarded all worldly attachments and practiced the severest form of penance and meditation. At last, he reached the ultimate state of knowledge- kevalya, under a sal tree. After that he was called Mahavira meaning 'great soul". He spent the rest of his life preaching his ideas.

Mahavira prescribed a path of non-violence towards all living things. According to Jainism, everything, even trees and stones have a soul. The main aim of life is to make the soul pure. This can be done by living a balanced life. 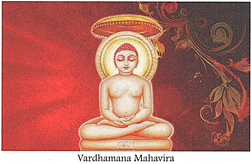 According to the Jains, Mahavira is the last of the 24 Tirathankaras.

Injury to living things is considered as a sin. The followers of Jainism should be strictly vegetarian. He was critical of the caste system. There are five vows for monks and nuns:

1. Not to injure any living being.

w3. Not to take what is given.

4. To lead a celibate life.

5. Not to possess any material things.

Jainism became a popular religion. It spoke out against the caste system, sacrifices and useless rituals. However, kshatriyas could not follow this religion because they could not follow non- violence. Also, farmers could not avoid killing pests and insects. Jainism was more popular amongst traders and merchants.

Jainism became popular among the masses because it did not involve complex rituals and was easy to follow. Its sacred text is written in Prakrit, the language of the masses. Several kings also extended their patronage to Jainism by adopting it. They encouraged Jain architecture and literature and built many temples. Though Jainism did not spread to other countries, it is well established in India.

The decline of Jainism began centuries after the death of Mahavira. One reason was the growing complexity of the Jain religious order called sangha. Jainism was also very strict. Also, it faced competition from Buddhism and Hinduism.

THE BUDDHA AND BUDDHISM

The word Buddhism comes from the Sanskrit word 'buddh' which means 'to awaken'. It implies the awakening out of darkness and ignorance into the light of teaching. Buddhism re- based largely on the teachings of Siddhartha 'Gautam. He was the son of the chief of the Sakya clan. Shuddhodana and his wife Mayadevi of mapilavastu. He was born in 563 BCE. After Achieving enlightenment, he came to be known as the Buddha.

Sidhartha pondered on ways to get rid of suffering and sorrow. He left his family because he wanted to find the right way to live. He then led me life of ascetic, fasting and practicing penances. One day, he sat under a Bodhi tree in Bodh Gaya and meditated and at last, he achieved enlightenment. He understood how to achieve happiness and peace. He thus became the Buddha meaning "the enlightened one" who had found the truth about life. 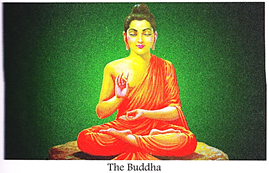 The Buddha gave his first sermon in Sarnath at the Deer Park. He travelled to many places, preaching his ideas. He told the people to be land to all, even animals. Also, he was strictly against the caste system. He told the people not to have too many worldly possessions because this leads to unhappiness. According to him, each of us lives many lives. We are trapped in a wheel of life. We will be born and reborn. This is called reincarnation. If people are good, they do not have to take birth again. This state is called 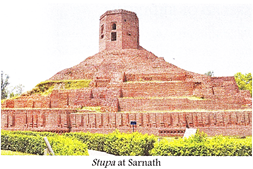 nirvana - a state in which there is no birth or death. It is freedom from suffering.

The Buddha realised that life is filled with suffering which is caused by people's wants. Suffering can be ended if people stop wanting things.

Buddha continued to travel around India and preach. He always taught in the language of the common people, Prakrit, in such a way that everyone could understand. Many people distened. They too had trouble finding happiness in a world full of suffering. Some who listened became monks, and helped to spread the word.

Many statues of the Buddha show him laughing. The Buddha is laughing to remind us that we need to greet each day with joy. 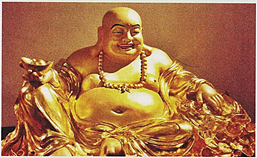 Buddhism grew in popularity. This was due to many reasons. Firstly, people were discontented with religion, rituals and ceremonies. Secondly, the teachings of the Upanishads were very difficult. The Buddha taught in Prakrit, the language used by the common people as opposed to Sanskrit. Also, the Buddha was against the caste system.

Later, Buddhism declined in popularity. There are a couple of reasons for its decline. Firstly, it split into two groups. The monks also began to teach in Sanskrit. Meanwhile, Hinduism also underwent changes and there was less emphasis on rituals and sacrifices. Finally, when the Muslims attacked India, they destroyed monasteries, the monks had to flee to Tibet and Nepal. Buddhism took a back seat in India but spread to many countries in Asia.

Many followers of the Buddha and Mahavira left their homes and became monks and nuns. They joined the sangha which was a community of monks. Men were free to join the sangha but women had to take permission of the husband. Children needed the parents' permission and slaves were required to ask the master. A monk's life was one of simplicity and monastic dedication to the religion and its tenets. They spent their time meditating and teaching. They lead lives of celibacy. They did not believe in keeping material possessions and worked hard for the happiness of people.

The monks were called bhikhus and the nuns were the bhikunis. They had to beg for a living and eat whatever was given as alms {bhiksha) to them. The monks travelled from place to place spreading the teachings of Buddha and Mahavira. During the monsoons, they took shelter in natural caves. Over the years, the monks built monasteries where they spent their lives, meditating and teaching. These monasteries were called viharas. Often, the kings and rich people donated land for the viharas. 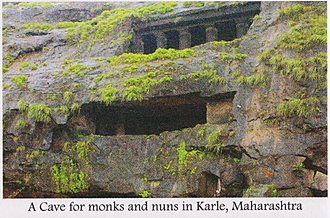 The Stages of Life - Ashramas

Ashramas are an outstanding feature of the social organization in ancient India. The life of the individual was divided into four ashramas.

The first ashrama or stage was known as the Brahmacharya which lasted till the age of 25 years. This ashrama was devoted to education. During this period the student stayed with the teacher, who looked after his physical, mental and psychological development.

The grihastha ashrama or the stage of a householder was the next stage which lasted from 26 to 50 years. This is the main time for having children and raising a family, as well as for working and fulfilling our duties to society.

The house holder entered the third stage of uanaprastha ashrama when he saw the signs of old age coming upon him. The person entering this stage was expected to renounce the comforts of a settled home life and retire from the world. He was to take up residence in the forests. He was expected to lead a life of complete detachment and to utilize his time for the study of holy books and practice meditation.

The last stage in the journey of man's life was samnyasa ashrama. It was the final and certain means of reaching the supreme goal of acquiring a knowledge of the self and emancipation from the bonds of life and death.

In Thailand, on Vesak, Buddhsit visit a monastery. They take flowers. Candles and incense sticks. The lighted candle symbolized wisdoms and the flowers indicate that nothing is permanent. The incense represents truth and signifies devotion to the Budhha. People walk around a stupa and some water the Bodhi tree. Fish are released back into rivers to show how the Buddha?s teachings bring freedom.

In Sri Lanka, lanterns are hung and paintings showing events from the Buddha?s life are displayed statues of the Buddha are decorated.