Notes - Motions of the Earth

Motions of the Earth

1.            Rotation of the Earth is the spinning of the Earth on its axis from west to east, resulting in the occurrence of day and night on the Earth.

2.            Revolution is the movement of the Earth around the Sun in a fixed elliptical orbit over a period of one year.

7.            The winter solstice in the Northern Hemisphere occurs on December 22, when the Sun is directly over the Tropic of Capricorn. It results in longest night

8.            Equinox occurs on March 21 and September 23, when the Sun is directly over the Equator and length of days and nights are equal in both the hemispheres.

The idea of moving around in space and viewing the wonders of the universe may excite you. But do you know, actually we all are space travellers. Our spaceship is the Planet Earth. It is constantly in motion spinning like a top on its axis. That is why we see the Sun rise and set, and day change into night. While rotating on its axis the Earth is also revolving around the Sun in a fixed path called orbit. Hence, we have change of seasons and different climates in different regions.

Earth has two types of motions?rotation and revolution.

The spinning of the Earth on its axis from west to east is termed as the Earth's rotation. An axis is an imaginary line running through the middle of an object. The Earth's axis is not exactly vertical, but inclined at an angle of 23.5° from the vertical. It thus makes an angle of 66.5° with its orbital plane. The plane formed by the orbit is known as orbital plane. One rotation of the earth takes exactly 24 hours and is called a solar day. The Earth's surface moves at the equator at a speed slightly over 1,675 km per hour.

If you could look down at the Earth?s North Pole, from the space, you would notice that the direction of the Earth rotation is anti-clockwise. If the earth is viewed from above the South Pole, the earth's rotation is clockwise.

Due to the Earth's rotation, the Sun appears to move across the sky from east to west. The Earth's rotation is also responsible for the daily cycle of day and night. The Sun, as you have leamt, is our main source of heat and light. Due to the spherical shape of the Earth, only one half of it gets light from the Sun at a time, while the other half remains in darkness. The circle that divides the lighted part of the Earth from the part in darkness is known as the circle of illumination.

EFFECTS OF THE EARTH'S ROTATION

? The apparent movement of the Sun seems to be from east to west?it is actually stationary.

? It has caused the bulging of the earth at the equator and flattening at the poles. 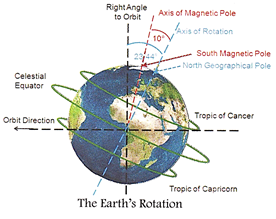 ? It causes day and night.

? It gives us a sense of direction as we see the Sun rise in the east and set in the west.

? It causes the deflection1 of winds and ocean currents.

? It causes tides2 twice a day.

? It also causes dawn and dusk. The period of diffused light before you actually see the Sun in the morning is dawn, and that before total darkness creeps in is dusk or twilight.

Q. What do you think would happen if the earth did not rotate?

To understand the apparent motion of the Sun

While travelling in a car or a bus, look out of the window. You will feel that the outside world?the trees, buildings, people and everything?moving backwards. But we ' know that it is the car or bus that is moving and not the things outside.

In the same way, when we see the Sun's position changing in the sky, it is in fact the earth that is moving and not the Sun.

Now that we know that the Sun is stationary and it is the earth that is in motion, is it right to say that the Sun rises in the east and sets in the west? 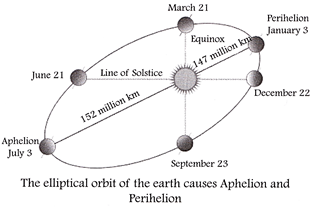 EFFECTS OF THE EARTH'S REVOLUTION AND THE TILT ON ITS AXIS

As we know, it takes 365 days and 6 hours to complete one revolution, and we call it a 'year7. This fraction of a year 1/4 year was a problem. So, the quarter day adds an extra day to the year every four years Q4 x 4 = 1). Every fourth year has 366 days and is called a leap year. The month of February in a leap year has 29 days.

Change of the Seasons

You know that the axis of the Earth is tilted slightly. This causes one part of the Earth to lean towards the Sun, and the other part to lean away from it. Hence, different parts of the Earth's surface receive varying amounts of sunlight and heat, and we have change in seasons.

At the same time, the northern half of the Earth, or the Northern Hemisphere leans away from the

VARYING LENGTHS OF DAYS AND NIGHTS

The length of the days and nights vary from place to place even at the same time of the year. This is again due to the tilt of the Earth's axis. When the North Pole is inclined towards the Sun, as one goes towards the pole from the equator, the days become longer and nights are shorter. Places beyond the Arctic Circle (see figure showing varying lengths of days and nights) experience continuous daylight for 24 hours for about six months. It is the summer season in the Northern Hemisphere. The Southern Hemisphere, which is tilted away from the Sun experiences winter. The lengths of the days are shorter and the nights are longer. Beyond the Antarctic Circle, where the Sun's rays do not reach, there is continuous darkness for 24 hours for about six months.

Q. Why is Norway known to tourists as the "Land of the Midnight Sun"? 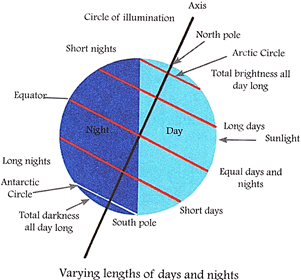 Solstice means the Sun standing still. Solstice occurs twice each year, when the tilt of the earth's axis is most inclined toward or away from the Sun, causing the Sun's apparent position in the sky to reach its northernmost or southernmost extreme.

Summer Solstice? Earth is positioned in its orbit such that the North Pole is leaning 23.5° towards the Sun. The Sun is directly overhead at    shortest night of the June 21 in the Northern    Summer solstice Hemisphere is called summer solstice. The Southern Hemisphere experiences the reverse conditions as it is tilted away from the Sun. On 21st June, the Tropic of Capricorn has the longest night. 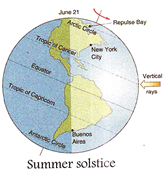 Q. Can you tell why Christmas is celebrated in summer in Australia?

Equi means 'equal' and nox means 'night', hence the word Equinox is formed. Equinox is the time when we have night and day of equal length all over the earth. Equinox occurs twice a year, when the earth's axis is neither tilted away from the Sun nor towards it and the centre of the Sun is in the same plane as the earth's equator.

Autumn Equinox? Autumn equinox in the Northern Hemisphere occurs on 23rd September when the direct rays of the Sun fall on the equator. At this position, neither of the poles is tilted towards the Sun, so the whole earth experiences day and night of equal lengths. The Southern Hemisphere has spring season at this time.

Spring Equinox? Spring equinox in the Northern Hemisphere occurs on 21st March when the direct rays of the Sun falls on the equator again. The whole Earth once again experiences day and night of equal length. The Southern Hemisphere has autumn season at this time. 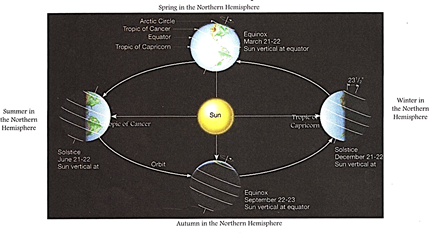 Notes - Motions of the Earth