Notes - Major Landforms of the Earth

Major Landforms of the Earth

4.            Mountains are natural elevations of the Earth?s surface rising more or less abruptly from the surrounding land.

5.            Plains are broad/nearly level stretches of land that have no great changes in elevation.

6.            Plateaus are elevated, comparatively level expanses of land. They are rich in minerals.

Have you noticed that the Earthy surface is not the same everywhere? It is uneven and irregular. Sometimes you may find it even but there are high mountains and valleys as well. These are natural physical features of the Earth?s surface or the lithosphere, and are called landforms. In this chapter we shall study about how the Earth is being shaped by various forces into landforms.

The Earth has an infinite variety of landforms. The three major types of landforms classified on the basis of their elevation (height above sea level), relief and slope are: ? mountains, ? plateaus and ? plains. Large, flat and mainly grassy areas are the plains. Hills are elevated land masses that are less than 300 metres above the sea level. Land with elevations more than 600 metres are called mountains. Plateaus are extensive, relatively flat uplands. Other landforms include valleys\[^{1}\], islands\[^{2}\] and canyons\[^{3}\]. 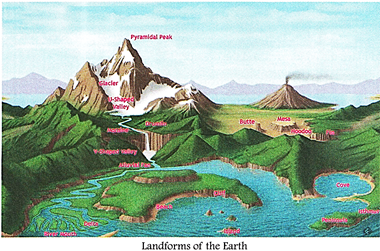 Large and small parts of our Earth are continuously changing and different landforms are being formed. There are two types of forces acting on the earth that bring about these changes?internal forces and external forces.

The ground that you are standing on is slowly moving. Within the earth a continuous movement is taking place. The Earth's crust is made up of huge slabs called tectonic plates, which fit together like a jigsaw puzzle. Internal movements below the earth's surface cause collision of these plates against each other. Landforms like mountains, faults, valleys and volcanoes are   formed   this   way. Earthquakes also occur 'due to these movements. You will read about them later in the chapter. External forces include running H water, moving air, waves and tides at sea, and movement of H|B frozen ice or glaciers. There is acontinuous process of wearing down by erosion and rebuilding by deposition due to the action ? of these forces. Plateaus, plains, hills and sand dunes4 are formed this way. 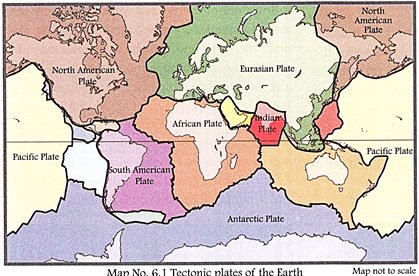 A mountain is a highland area, usually over 600 m above the surrounding land. Covering about one-fifth of the lithosphere, mountains are found on land as well as under the sea. A mountain often has a broad base steep slopes and a peak. The highest peak in the world is Mount Everest in the Himalayas at 8,850 metres. Mountain ranges are long chains or groups of mountains usually 1,000 km long or more. The Rocky Mountains and the Himalayas are examples of mountain ranges. About 80 per cent of our planet's fresh water originates in the mountains and all the world's major rivers are fed from mountain sources. Some higher ranges of mountains, as in the Himalayas and Alps, have frozen rivers of ice known as glaciers. The climate gets harsher as one goes higher up the mountain, and less people live here. Moreover, as the slopes are steep and there is less land for farming, it is difficult to make a living here.

Q. How do you think glaciers affect the land?

There are three basic kinds of mountains: 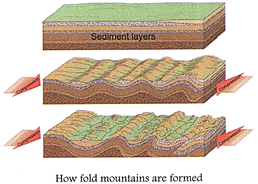 Two tectonic plates meet along the Southern Alps in New Zealand. The Southern Alps are constantly changing because the Pacific Plate is being pushed down under the Australian Plate and this causes the

Alps to rise up. 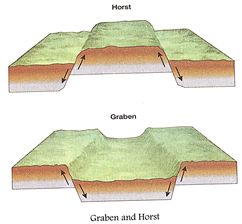 Earthquakes occur along the fault lines when two plates rub against each other causing a sudden tremor or even a fracture in the Earth's crust.

As rocks deep inside the Earth melt, they form magma. The movement of the magma and the pressure from the gases in the magma trigger an eruption through an opening or vent. This is called a volcanic eruption. Magma is called lava when it flows out of the Earth?s crust. Often eruptions are accompanied by rocks, ashes and gases. Over time, the rocks and lava cool and pile upon the surface to form volcanic mountains. Earthquakes also occur whem volcanoes erupt. Example of volcanic mountains include Mount Fujiyama in Japan. Mount St. Helens in North America Mount Pinatubo in the Philippines, Mount Kea and Mount Etna and Mount Vesuvius in Italy and Mount Cotopaxi in south America. 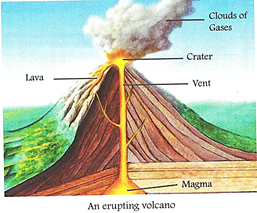 (i) Mountains are a store-house of fresh water. Many rivers have their sources in mountain glaciers, for example the Ganga originates in the Gangotri glacier.

(ii) Mountains help in the condensation of moisture and bring about rainfall. They also act as barriers against cold and hot winds.

(iv) Plains around volcanic mountains are very fertile as they are made up of volcanic materials brought down by rivers and running water.

(vi) Mountains are great tourist places and ideal for resorts. They are places for leisure. Some people like to ski, others like to do rock climbing. Some people visit the mountains just to enjoy the weather and admire its scenic beauty. Several sports like skiing, hang gliding, paragliding and river rafting are popular in mountaineous areas.

Discuss the importance of the Himalayas in India.

A plateau is an elevated, comparatively level expanse of land. People also call it tableland because of this shape. Plateaus account for about 30 per cent of the earth's surface and are usually over 600 metres above sea level. Plateaus are formed when mountains get eroded. Plateaus are rich in minerals. The Deccan plateau in India is one of the oldest plateaus and extends over thousands of kilometres. The Tibetan plateau is the highest plateau in the world with a height of 4,000 to 6,000 metres above sea level. The plateaus of Western Australia, East Africa, Kenya, Tanzania and Uganda are other examples, to mention a few.

Continental plateaus are extensive plateaus that rise abruptly from the coastal areas. The plateau regions of South Africa and the Indian Peninsula are examples of this kind.

Lava plateaus are formed by lava that comes out from fissures and gets deposited over extensive areas for millions of years. The Deccan Plateau of India, and the Columbia Plateau in USA are examples of this type.

The plateau regions are very rich in minerals. The African plateau areas are famous for gold and diamond mines. The Chota Nagpur plateau in India has vast resources of iron, coal and manganese. Lava plateaus have fertile soil and are used for farming. The Deccan plateau has black soil which is good for cotton cultivation. The grasslands covering some plateaus are extensively used for livestock rearing. In the plateau areas, there may be several waterfalls as the river falls from a great height. In India the Jog Falls in Karnataka is an example. 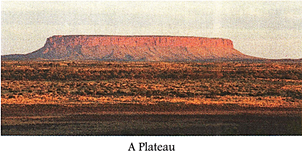 Plains are broad, nearly level stretches of land. They can spread over hundreds of square kilometres. More than half of the earth's surface is covered by plains. Most plains have been formed by rivers and their tributaries which bring down fertile silt or alluvium5. Hence plains are good for agriculture. Examples of large extensive plains are the Central Plains of the United States and the Plains of Eastern China. 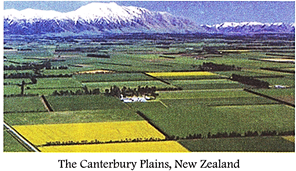 Some plains that continue to grow in area are the deltas. A delta is a low-lying area almost triangular in shape at the mouth of a river formed from deposition of alluvial soil carried by the rivers. Some major deltas are the Nile River Delta, Mississippi River Delta, Sunderban Delta and the Rhone River Delta. Importance of plains 1 People find plains useful for a wide range of activities.

(i)            The soil is fertile here. The gentle slopes and valley floors have the Earth's most important farmlands. Some of these valuable farmlands include the North European Plains, the Ganga- Brahmaputra Plain of India and the North China Plain.

(ii)          Plains and valleys are also places for settlements with sprawling towns and cities facilitating farming and industrial activities.

(iii)         Communications is smooth as construction or roads and railways is easy here.

This is the reason that plains are thickly populated.

The plains along the rivers?Tigris, Nile, Indus, Howang Ho and Yantaze have been the cradles of civilisation from the earliest times. Discuss the reasons. 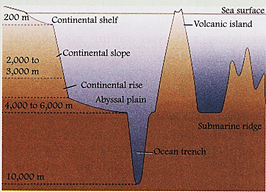 Landforms affect people in both positive and negative ways. For example, high mountains can be barriers to communications. Yet the valleys can become important routes for trade. Volcanoes can bring about destruction, yet they produce fertile soil. We too have altered the environment in a big way to serve our purposes. Sometimes we have changed the landforms. Farmers have ploughed the land and changed it to grow crops. We have built dams on rivers to check floods and produce electricity.

But excessive alteration of the landforms may have negative effects on us.

We are polluting the air and water as well by emanating harmful by-products. This is disturbing the environment. A land that offers us place to make our home and gives us thousands of types of plants to live on is being exploited. We are extracting all that we can from the landforms?minerals, petroleum, natural gas etc. At the rate we are doing this, all the coal and petroleum from the earth will finish one day. The same goes for minerals.

We are cutting down trees and clearing forests for settlements and industrial activities. This is having a drastic effect on the environment. It is time we realise the need to be very careful and wise while using the gifts of nature so that we can continue enjoying them.

The Earth Day is observed on 22nd April every year to make each one of us aware of our responsibilities towards the earth.

Q. How do you celebrate Earth Day?

Notes - Major Landforms of the Earth