1.            By the end of the Rig Vedic period, many territorial states called janapadas arose as people stopped moving from one place to another. These states became stronger and bigger and were called mahajanapadas.

3.            These mahajanapadas were either republican or monarchial. In a republic (gana-sangha), the territory was governed by an assembly and not a hereditary monarch.

5.            The raja needed resources for maintaining an army and also for fortifying the cities. So, the people had to pay taxes to the king who appointed officials to collect them.

6.            Of all the mahajanapadas, Magadha came into prominence. It became the seat of a powerful monarchy and the center of an extensive empire.

How many states does India have? Maharashtra, Manipur, Himachal Pradesh, Tamil Nadu etc., are all states of India and India has 29 states. But what exactly is a state? In social sciences, a. state is defined as the political body of a centralised government exercising its authority within a certain territory. In simple words, it is an area of land (sometimes sea) controlled by a single, independent government. So, is India a state? The answer is yes. India is a republic state. Let us find out about the emergence of early forms of republic states in India.

By the end of the Rig Vedic period, the position of the ruler became very important. He was extremely powerful and lived a luxurious life. We have read that earlier the rulers were chosen by the jana. But by 1000 BCE, this trend was changing. Sometimes, a person became a raja by performing the ashvamedha or horse sacrifice.

The king who organised it was considered very powerful. During this sacrifice, a special 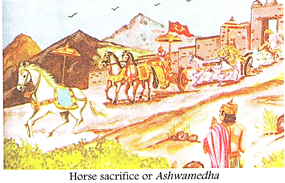 horse was allowed to roam free for a year. It was followed by the king's soldiers. Whichever kingdom the horse roamed into had to accept the king's supremacy or fight with him. When such rituals were held, the jana, the raja's family and other rajas came to watch. The jana bought gifts for the king. All sections of the society were present for the rituals, except the shudras.

There are four Vedas. They are Rigveda, Samaveda, Yajurveda and Atharvaveda. The Rigveda was composed first. The other three were composed later and are also called the "Later Vedas'. The society was divided into four groups or varnas. Each varna had a different role in society. The four groups were the brahmins, the kshatriyas, the vaishyas and the shudras. This division of varnas was strictly observed. The varna was decided by the birth of the individual. If the child was born to a kshatriya, he would automatically become a kshatriya.

The brahmins were the most powerful and enjoyed a respectful position in society. They performed all rituals and sacrifices and thus had an important place in society. They could study and teach the Vedas. They claimed to belong to the highest varna. Next to the priests came the kshatriyas, who were the warriors. They had to protect the people. These two upper varnas had many privileges. They were not required to pay taxes and were never given severe punishments. The vaishyas were the cultivators, traders and artisans. They paid the taxes. Both the kshatriyas and the vaishyas could perform sacrifices.

The last were the shudras. They lived a cursed life. They performed all menial jobs and served the upper classes. They could not listen to the Vedas or participate in any religious ceremonies. They lived in the outskirts of the villages. They could not even take water from the same well as the other people. Some people were below the shudras in position. These were the untouchables. They were the people who performed burials and cremations. Untouchables were barred entirely from temples, and sometimes were not even allowed to set foot on temple grounds. If the shadow of an untouchable touched a brahmin, he/she would be polluted, so untouchables had to lay face- down at a distance when a Brahmin passed.

However the varna system was not accepted by everybody. Many felt that verna should not be according to one?s occupation. Others were of the view that everyone should be able to participate in religious ceremonies. Also some kings felt that they were superior to the brahmins.

Many territorial states emerged in different parts of the country. These were known as janapadas. The word jana means 'people' and pada means 'foothold'. They were ruled by rajas. These were regions consisting of urban and rural settlements along with their inhabitants. Each of the janapadas was named after the kshatriya tribe or the kshatriya jana who had settled there. Each janapada had clearly demarcated boundaries.

The janapada was ruled by a raja or king. A chief purohita (priest) and a senani (commander of the army) assisted the raja.

Agriculture was the main occupation of the people. Rice, wheat, barley and pulses were grown. Sugarcane was also grown which was not grown in earlier times. Earthen pots were made. Painted Grey Ware was the common type of pottery. The grey pots had painted designs.

The larger janapadas came to be known as mahajanapadas. These were large kingdoms. The term mahajanapada is derived from Sanskrit and it means 'great country'. Buddhist texts tell us that there were 16 mahajanapadas between 600 BC and 300 BC. The mahajanapadas had a capital city.

The rajas maintained standing armies. The soldiers were trained and paid regular salaries. Conflict between the kings of the mahajanapadas was common. They fought to increase their territories. The states had many cities. The cities were fortified. Tall walls were strong and made of brick, stones or wood and were constructed around the cities. This had many advantages. The wall was a protection against enemy attacks. Also, the kings displayed their power and wealth by building these tall walls. Administration within the fortifications was also much easier. 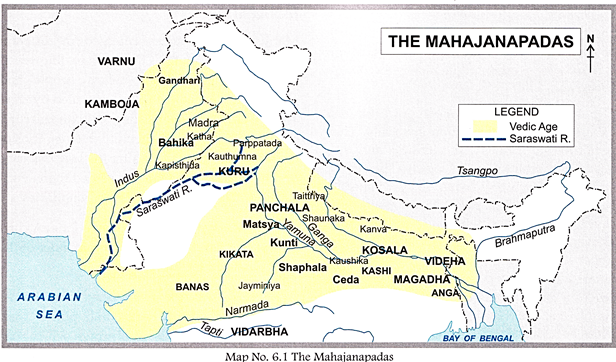 However, to make such walls, large amounts of funds and labour were needed.

It was during this period that metal coins were used in India for the first time. The coins were punch marked.

Two types of government existed in the mahajanapadas. One was monarchial and the other was republican.

The republic states were known as gana- sanghas. Here the territory was governed by an assembly. Power was vested in the hands of the heads of the leading kshatriya families. These heads called themselves rajas. There could be thousands of rajas. They usually met once a year in an assembly to discuss important issues and elect their leader.

The gana -sanghas were named after the ruling Kshatriya clan. The gana-sanghas had two divisions in society. One was the ruling class - the kshatriya families called rajkula. The other was the labourer class called karmakara. The ruling families had all the powers whereas the karmakaras had no rights. Women, slaves and karamkaras were not allowed to participate in any assemblies or discussion.

Q. What could be the possible reason for the republican states not having a standing army?

There were two important advancements in agriculture which led to increased agricultural production.

Firstly, now iron ploughshares were used to till the land. Also, iron axes helped to clear land for agriculture.

Secondly, Farmers began adopting new Techniques in agriculture. Paddy seeds were not sown in the field directly. Saplings were grown and these were then transplanted in the fields. This led to better rice production.

The raja needed resources for maintaining an army and also for fortifying the cities. The people had to pay taxes to the king who appointed officials to collect taxes. Bali, which was a voluntary tax, became compulsory.

In the middle of the 3rd century BCE, India was invaded by foreigners from the north-west. One such foreign invader was the famous the ruler of Macedonia1, Alexander. At the young age of 26, he left his country with a huge army to conquer the world. After conquering Egypt, Syria, Palestine and Persia, he marched triumphantly towards India. When he reached the River Beas in Punjab, his soldiers refused to go ahead. They were scared. They had heard that the Indian rulers had huge armies with elephants and chariots. Alexander was then forced to return home.

Of all the mahajanapadas, Magadha came into prominence. It became the seat of a powerful monarchy and the center of an extensive empire. The kingdom of Magadha lies in the area of modem-day Bihar, south of the Ganges. It included Bihar, Bengal and some parts of eastern Uttar Pradesh.

Magadha's favourable geographical location enabled it to control the whole lower Gangetic plain. The rivers Ganga and Son flowed through it. Because of this, there was plenty of water and fertile soil for agriculture. Also, the thick forests in Bihar were a source of timber and elephants. Timber was required for buildings, carts and chariots. Elephants were required for the army.  Another asset was the rich deposits of copper and iron ore though which superior weapons of war and tools for agriculture could be made.

The old capital of Rajagriha was fortified and could resist enemy attack. Later, the capital was shifted to Pataliputra and Magadha got control over all the river traffic and increased trade. Due to all these factors, Magadha became more stable and steadily swallowed all other existing states.

The first ruler of Magadha was Bimbisara. His son, Ajatasattu succeeded him. Both these rulers were very ambitious and followed expansionist policies. The Nanda Dynasty was another important dynasty that ruled Magadha and expanded its territorial boundaries. The last ruler of the dynasty was Dhana Nanda, who was defeated by Chandragupta Maurya who later established the Mauryan Dynasty.

Vajji was one of the most prominent mahajanapadas. It was a powerful republican state or gana- sangha. It was named after the ruling clan - the Vrijjis. It was a flourishing republic state at the time of Mahavira and Buddha.

Its capital was at Vaishali. It was a prosperous city and was surrounded by a triple wall with three gates with watch towers. It became an important center of cultural and political activities. The Vrijjis were defeated by Ajatasattu and the kingdom became a part of Magadha later on.

Two of India's major religions, Jainism and Buddhism, began from Magadha and two of India's greatest empires, the Maurya and the Gupta empire, originated in Magadha.

? According to Vinay Pitaka (a Buddhist scripture), once Lord Buddha did not have any money to pay the ferryman who took him across the Ganges. Bimbisara later announced a reduction of ferry charges for all ascetics.

The first states and cities in the valley of the Hwang-ho River in China were started by powerful families or dynasties. They had a strong belief in the spirits and the law of their ancestors. Life j in the Hwang-ho valley was not peaceful and there were frequent wars between the small city states until the Qin Dynasty united the Chinese people in about 206 BCE. The first Qin emperor, Shi Huangdi was a harsh and powerful ruler. He had a massive wall built to protect his empire from attacks by the northern tribes called Huns. This wall was made by joining together a series of smaller walls put up by earlier rulers. Today known as the Great Wall of China, it is the biggest man-made structure in the world which could be seen even from the moon. When Shi Huangdi died in 201 BCE, he was buried in a huge tomb guarded by an army of nearly 10,000 life-size model warriors. The warriors were made of terracotta and carried real weapons. It is said crossbows were set to fire automatically at anyone who tried to break into the tomb. 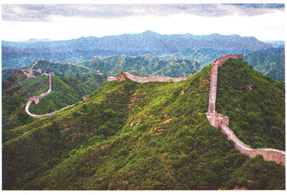