2.            We differ from one another in physical appearance, food habits, religious beliefs, ideologies, dresses, etc.

4.            Diversity encourages us to adapt to new people, places and surroundings, and become more tolerant and broad-minded towards our differences.

The great German indologist Max Muller said? If I were to look over the whole world to find out the country most richly endowed with all the wealth, power and beauty that nature can bestow ? in some parts a very paradise on earth- I should point to India.?

This statement shows that India is a land of diversity which enhances the beauty of this country.

As you sit in your classroom, look around and observe each student. You will find that each student looks different from the other. Some are dark-skinned while some are fair; some have curly hair, and some have straight hair; some are tall, others are short; some are fat while some are thin. You also differ in your habits and interests. Your friend might like to play basketball, but you would go for cricket. Your religious beliefs might differ as well. You might go to a temple to pray, but your friend would visit a church on the weekend.

At home also, you might find many differences between you and your\[sibling{{s}^{1}}\]. Your sister likes to wear jeans but you like a pair of shorts. She loves rice, you like chapatti; she is good at painting while you are a good dancer. Again in your building or street, there might be people from various places with their varied ways of dressing and food habits. Even the plants and animals around you show a wide variety; they are of different shapes, colours, sizes and show different behaviour. This is diversity. Diversity can thus be defined as the state or fact of being different and unique. Diversity can be in terms of gender? that a boy is different from a girl; language?we speak different languages at home. Differences are there in age and \[ideoligie{{s}^{2}}\], this is why perhaps, at times we think differently from our parents. This is also why there are so many political parties and religions. We all hail from different regions of our country; some of us may also be from different countries of the world. We speak different languages, celebrate different festivals, follow different faiths, have different ways of life, i.e., we have different cultures.

Collect information about your friend?what he eats for his meals, what language he speaks at home, what are his parents' professions, which place of worship he goes to and what festivals does he celebrate. Compare each aspect with yourself. How many aspects of your life are different from your friend's?

We live in different places, go to different schools and our parents have different jobs. This way, every person is unique and different from the other. 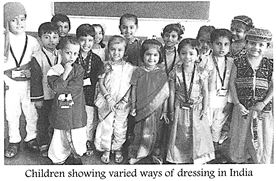 India is a country with vast diversities. The land is vast with a variety of geographical features. This gives way to a rich variety of vegetation and wildlife. India has dry deserts, green forests, snowy mountains, fertile plains and islands. Tigers are found in forest regions, cattle in the rural areas and camels in deserts; orchids grow in wet and cold regions, while cacti and date palms grow in dry places. Geographical diversity affects food habits and clothing and gives way to cultural diversity. Cultural diversity refers to the different ways of living in terms of dresses, food, customs, etc.

In India, the economic condition of people is influenced by the geographical factors of that particular region. People living in fertile Indo- Gangetic plains are mainly farmers. Agriculture is the primary occupation of people living in the regions such as Uttar Pradesh, Madhya Pradesh, Andhra Pradesh, Tamil Nadu, and Kerala etc. Agriculture is not easy in cold regions such as Jammu and Kashmir, and Ladakh. People residing in such areas which are covered with snow throughout the year, rearing animals like cattle, sheep and yaks is the main occupation. For people from coastal areas such as Maharashtra and West Bengal, fishing is an important occupation.

The food habits vary in accordance with the availability of raw materials and the method of preparation. For example, people living in Tamil Nadu eat rice more than wheat, and those hailing from Punjab prefer wheat to rice. The latter drink a lot of milk. They grow sugarcane as the soil available in their state is good for its cultivation. Again, coastal places like Kerala, Goa and West Bengal have a flourishing fish industry. However, people share and enjoy the dishes of other regions. Parantha and curry might be your staple food, but you definitely enjoy idli or dosa for a change. 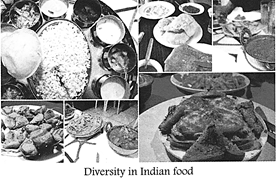 There is variety in the dresses worn by the people of various regions in India. Unstitched clothing is popular in the form of saree, lungi, dhoti, turban etc. The dhoti that is worn in different parts of the country has different names. It is called vesti in Tamil, dhoti in Odiya, dhotiyu in Gujarati, Suriya in Assamese, Dhuti in Bangia, and so on. Likewise, the saree that is worn by the women is draped in different ways and has different names.

The Indian Constitution officially recognizes 22 regional languages. Pick up a banknote, you will find that the face of the note lists the value of the note in 15 Indian languages. There are over 200 languages and 1,600 dialects spoken in India. 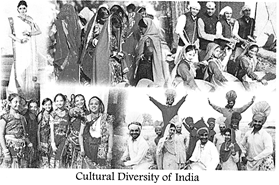 Every major religion is practised in India. The major religious groups are?Hindus, Muslims, Christians, Sikhs, Buddhists, Jains, Zoroastrians and others. It is also the birth place of Hinduism, Buddhism, Jainism and Sikhism.

The Constitution of India declares India to be a secular country. Secularism in India means equal respect for all religions and non-interference of religion in the government affairs.

Do you think diversity is the beauty of Indian culture? Have a debate on this. 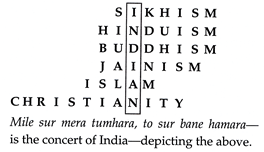 The followers of these religions celebrate festivals such as Diwali, Christmas, Gurupurb, Eid, Buddh Poornimas, Jamshed Navroz, etc. We have a national holiday in the country for festivals of different religions. We should love and respect each other's religion. 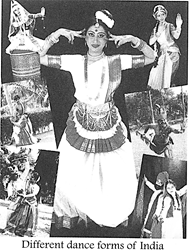 WHAT DIVERSITY ADDS TO OUR LIFE

Just imagine, everyone looked like you; you and your sibling wore the same dress at home; all the classmates brought the same food; there was just one type of plant and animal in your surroundings. Won't it be very boring? You wouldn't get to enjoy different dishes during lunch break; you wouldn't enjoy different colours and fragrances of flowers. Thus, we see, diversity adds variety and enjoyment to our life. Diversity gives us a chance to live with people who may be quite different. Our class is a model of diverse individuals getting along. Each individual is different in his or her own special way. We recognise the different characteristics of each individual, appreciate the differences and learn from each other's culture, ideologies, traditions, etc. After all, our ways may be different, but we all have the same goal. We might be going to different places of worship but pray to one God. We might be eating different dishes but the purpose is to get nutrition and stay healthy. Hence, we should appreciate diversity. Diversity, thus makes us tolerant and open-minded.

Q. Do you like to make friends who are like you or different from you? Give at least two valid reasons in support of your answer.

Have you thought how your interests and skills are different from your sibling or your friend? You might be a better bowler but your friend is a better batsman and another, a good fielder. You are dependent on each other to win the match for your team. Varied skills in people in a society help us to benefit from one another and improve the quality of life. Thus, dependence on one another in a society for mutual benefit is known as interdependence. Diversity promotes interdependence.

India is a perfect example of a diverse nation with people hailing from so many different regions, speaking so many languages, yet holding on to their inherent cultures and characteristics.

Diversity as you know, means 'many' or different. It is the condition of being multiple or plural or diverse. Say, in your neighbourhood there stays Mr. John, a Christian; just next door is the house of a Muslim family, the Khans; across the road lives a Hindu family, Mr. and Mrs. Sharma. This is certainly an example of diversity. In this case, if all the families are friendly to one another and appreciate the differences, then we say that there is unity in diversity. To live in a diverse society, one needs to be tolerant and broad minded.

Kerala is located in the south-west part of India. Spices like pepper, cloves and cardamoms are grown here. The spice cultivation attracted the Jewish and Arab traders. These traders came and settled here. Once the sea route to India from Europe was discovered by the Portuguese, many European ships started coming here. These religious here like Islam, Christianity, Hinduism and Buddhism.

The people who came and settled here eat rice, fish and vegetables today. Fishing is an important livelihood in Kerala. Chinese fishing nets or cheena-valor and cheena chatti or the frying utensil are quite popular here.

Ladakh is a cold desert, and is located in the eastern part of Jammu and Kashmir. Cultivation is not possible in this region as there is very little or no rainfall. Melting snow is used for getting water. Sheep rearing is an important occupation here. The population is low. People here mostly trade in wool. They sell wool to traders in Kashmir. The wool is used to make Pashmina shawls. Meat and milk products like cheese and butter are important food items. Buddhism and Islam are practiced here.