Living Organisms and Their Surroundings

1. Our environment is made up of biotic and abiotic components.

2. Main types of habitat are aquatic and terrestrial.

3. Desert plants and animals are adapted to reduce loss of wafer.

Livings organisms exist in most places. We come across plants and animal se very day.

Living things are found practically everywhere. Some live on land, some under water, some in burrows, and some in air. Life exists even in open volcanoes.

Some organisms live even in our homes.

The word ecology is derived from Greek word ’Oikos’ which means ‘house’ or ‘place to live in’ German Biologist Ernst Haeckel was first one to use this word.

The term habitat refers to the surroundings where organisms live. Every habitats home for a certain living creature. Habitat includes both living and non-living components. Plants and animals have different features that help them to survive in their own habitat. Habitat can be terrestrial or aquatic.

A good habitat provides its inhabitants the following: 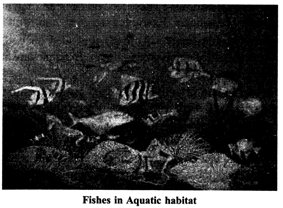 1. A suitable place for organisms to stay and rest.

3. Provides protection to the in habitants.

4. Provides place for breeding and rearing of organisms.

Terrestrial habitat refers to the land where all plants and animals survive. It includes deserts, forests and grasslands, as well as coastal and mountain regions. For example, camels and cactus plants live in deserts only.

Adaptation: Plants and animals develop certain features or certain habits that help them survive in their surroundings, and this is known as adaption. Different living creatures adapt to their habitats in different ways. For example, fish have gills that help them to live in water and use the oxygen dissolve in it.

6. Plants that live in water have special tissues that help to take in dissolved gas from water. For example, the ulva has ribbon-like leaves. It takes thousands of years for a livings being to adapt to its habitat.

Acclimatization: The small adjustments by the body to overcome small changes in the surrounding atmosphere for a short period of time are called acclimatization.

The components in a habitat are broadly classified into two types. They are biotic and a biotic components.

Biotic components include all the livings organisms in a habitat. These can be farther classified into following categories:

(a) Producers: Green plants are the only living organisms that make their own food. They are, therefore, called producers of food.

(b) Consumers: All animals and non-green plants directly or indirectly depend on plants for food. They consume the food prepared by the producers. All animals, including human beings are consumers.

Consumers are of three types:

(i) Herbivorous animals: These are plant-eaters. Since they feed on plants directly, they are called primary consumers. Examples are cow, deer, goat, buffaloes, elephants, etc.

(ii) Carnivorous animals: These feed on other animals and are called secondary consumers. Examples are tiger, lion, wolf, etc.

(d) Decomposers: Microorganisms like bacteria and fungi are very small organisms. They cannot be seen with the naked eyes. The semi croorganisms feed on dead remains of plants and animals and their wastes. They decompose them into simple nutrient substances they were made up of. They help in recycling of matter in the environment.

For example, sprouting is the first step where a new plant grows from a seed.

The sprouting of a seed depends on a biotic components such as air, water, light and heat.

Terrestrial Habitat: Habitat is the place that is natural for the life and growth of an organism.

Now let us discuss how animals and plants adapt themselves for the terrestrial and aquatic habitats.

Adaptations in desert animals: Camels have long legs for adaptation. It has hump to store fat, can drink large quantities of water at one time and can stay without water for several days. It excretes very little urine and its dung is dry.

It does not sweat and its feet are padded so that it can walk on sand easily. 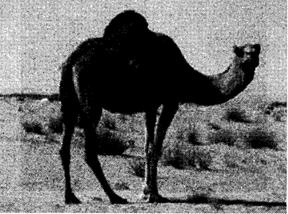 Camel can survive in a desert

Snakes and rats live in burrows and come out only during the night when it is cool.

In desert plants, the leaves are either absent or reduced to spines as in cacti.

The leaf-like structure seen in cactus is its stem and it carries photosynthesis.

The roots grow deep into the soil for absorbing water. The reduced leaf and the thick waxy layer of stem minimize transpiration. Many Cacti plants have fleshy stems to store water. These are called succulents.

Most of the trees in cold mountains are cone shaped. The leaves are also veryth in and look like needles for the sliding of water and snow during rains and snowfall. Animals in mountain areas have long hair and thick skin to protect them from cold climate. Thick fur all over Bodies of Yak and Snow Leopard protects them from the cold climate. The mountain goat, have strong hooves that help them run on the mountain slopes easily.

Adaptations in animals found in grassland: The animals living in the grasslands show some adaptations.

Lions live in forests and prey on other animals, like deer, for food. 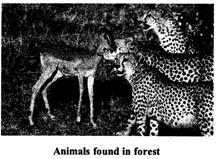 The lions brown skin colour blends easily with the colour of dry grass in grasslands and helps in the catching the prey. They have strong claws to tear and eat their food. The eyes of the lion in front of its head help in identifying the prey from long distances. Deers have long ears to help them sense the presence of a predator. Deers have eyes on the side of its head to look in all directions for danger and have long legs to run away from predator.

All the fresh water and marine water bodies, has come under aquatic habitat.

Fish have special features that help them to live in water.

They have streamlined bodies, which reduce friction and allow them to move freely in water.

Sea animals like the octopus and the squid do not have streamlined body as they stay deep inside the ocean on the ocean bed, but make their body streamlined when they move in the water.

Sea animals, like fish, octopus and squid have gills that help them to absorb the dissolved oxygen from the water they drink Dolphins and whales have blowholes to breathe in air when they swim close to the surface of the water and there by stay inside the water for a long time without breathing.

In general the aquatic plants have much smaller roots and helps the plant in holding on the surface. Stems are long and light. Leaves and Submerged plants such as Ulva has narrow and ribbon-like leaves. These allow the plants to bend themselves in the direction of the flow of water. In milfoil, leaves are highly dissected, making water to easily flow without Frogs usually live in ponds and lakes.

A frog can live both in water and on land. Frogs have strong hind legs to hop on land and webbed feet to swim in water.

Frogs also have a membrane called the nictitating membrane on their eyes.

This membrane helps protect their eyes inside water.

Aerial adaptations: Birds are adapted for aerial mode of life. Some of three adaptations are:

2. Birds have feathers and wings to fly. Their forelimbs are modified to function as wings.

3. They have sharp eye sight. E.g. eagles can spot their prey from a great height.

4. Joints in the bones are completely fused.

5. On the basis of habitats, plants are divided into three categories:

Mesophytes: These are plants which like moderate temperature and sufficient water. These plants dominate other plants. Almost all herbs, shrubs, trees are placed under this category. The plants you see and those found in countryside and forests, all come under this category.

Xerophytes: These are land plants that are found in deserts or areas with very little water or moisture. Most of them have fleshy stems and leaves change into spines to avoid loss of water. 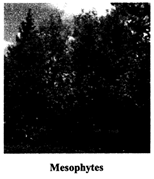 1. Aquatic: These animals live in water. If taken out of water, they die.

2. Terrestrial: These animals live on land. Horse, cow, buffalo, cat, dog, giraffe, lion, squirrel, camel along with host of other animals belong to this group.

3. Amphibian: These are the organisms which can live both on land as well as in water. Frog and toad are examples of this group.

4. Arboreal: Monkeys, squirrels, some spiders, a few snakes and a host of other animals are arboreal i.e., they live on trees.

Food makes the body grow faster, and gives energy to the body to help it perform the life activities. For example, plants produce their own food by the process of photosynthesis, and grow. Animals depend on plants and other food for their survival.

Livings Things Respire: Respiration is the process of breathing in and out.

Living things take oxygen into the body as they breathe in and release carbon dioxide as they breathe out. The oxygen that enters the body during respiration helps the body to create energy from the food consumed. Some animals have special organs that help them in the process of respiration.

For example, the gills offish help them to absorb oxygen dissolved in water.

Earthworms breathe through their skin. Plants have tiny pores on the leaves that help them to breathe.

Plants respire day and night, but breathe out oxygen during the day. Plants release more oxygen while producing their food than they release during respiration.

Livings Things Respond to Stimuli: Stimulus is a change of some kind the environment of a living organism. Every living thing responds in some way or the other to stimuli. The response in plants to stimulus can be observed For example, a plant called touch-me-not closes its leaves when touched. Also, the Evening Primrose blooms only during the night, while the flowers of

Livings Things Excrete: The process of eliminating wastes from the body is called excretion. Livings things need food, but they only absorb some amount of it for various processes, while the remaining food needs to be eliminated from the body. For example, plants eliminate harmful waste substances in the form of secretions such as resins and gums, whereas some plants store the harmful substances without any difficulty.

Livings Things Reproduce: All livings things reproduce. Some animal’s lay eggs while others reproduce by giving birth to young ones. Plants produce seeds that can germinate into a new plant, but there are some, such as potato and rose plants, which reproduce through other parts.

Livings Things Move: Even though plants are livings things, they cannot move as their roots are fixed in the soil. However, the substances produced and required for their growth, such as water, minerals and food, move from one part of a plant to another. Some plants show some restricted movement.

Animals have various modes of locomotion.

Livings Things Die: All livings things must die one day or another. Plants and animals die. 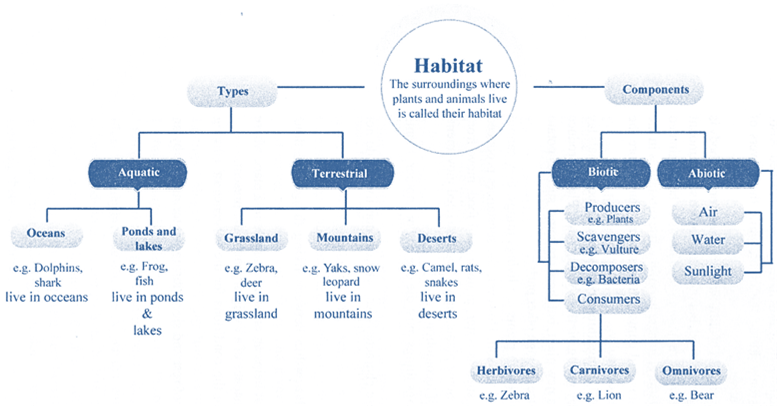 Notes - Living Organisms And Their Surroundings