6th Class Science The Living Organisms and their Surrounding Environment

Water is an abiotic component of the environment which is essential for the survival of life on the earth. It is present on the earth in all three states solid, liquid and gas. It covers about 71% of the earth surface.

It is the water which makes life possible on earth. Without water existence of life was not possible on the earth. Therefore, water is very important for all of us.

Water is found on earth in all the three states.

Solid: Snow is the solid state of water. When water is cooled, it is converted into ice. This process is known as freezing or solidification.

Liquid: When ice is heated, it is converted into water. This process is known as melting. Condensation is the process by which water vapor cooled down to convert into water.

Gas: Water vapor is gaseous state of water. When liquid water is heated, it gets convened into water vapor. This process is known as evaporation.

The continuous circulation of water from the earth's surface to atmosphere and from the atmosphere back to the earth is called water cycle. 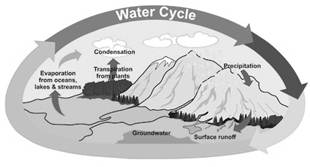 Due to sunlight water from the different sources converts into water vapor. These water vapors rise up in the atmosphere and condense to water drops forming cloud. Then they return back to the surface of earth in the form of rain.

Rain Water: Rainwater is the purest form of water. It collects on the earth in the form of surface water and underground water.

Surface Water: Water present on the surface of the earth in the form of oceans, seas, rivers, lakes, ponds and streams is called surface water. Ocean contains almost 97% of water present on the earth. But it is saline therefore it is unfit for drinking.

Underground Water: Some of the rainwater seeps through the soil and gathers in the non-porous rocks below. This water is known as underground water.

As we have studied earlier water is very important for us. So we must conserve water whenever it is possible. Some ways of water conservation are:

The earth's atmosphere (or air) is a layer of gases surrounding the planet earth that is retained by the earth's gravity. Dry air contains roughly (by volume) 78.08% nitrogen, 20.95% oxygen, 0.93% argon, 0.038% carbon dioxide and trace amounts of other gases.

Air also contains a variable amount of water vapor, on an average around 1%. The atmosphere protects life on earth by absorbing ultraviolet solar radiation, warming the surface through heat retention (greenhouse effect) and reducing extreme temperature between day and night.

Composition of Gases in Earth's Atmosphere 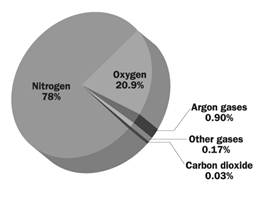 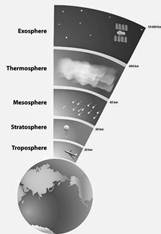 Garbage may refer to the waste, an unwanted or undesired material or substance.

Biodegradable: The waste that can be decomposed by the microorganisms is called biodegradable waste. Biodegradable waste typically originating from plant or animal sources. For example, fruit and vegetable peels, leaves, papers, cow dung, wood, etc.

Non-biodegradable: The waste that cannot be decomposed by the microorganisms is called non-biodegradable waste. For example, plastics, glass, metals, etc.

There are different methods of disposal of waste:

Composting: By this method biodegradable waste is converted into manure which is used for agricultural purposes. Biodegradable waste is dumped in a pit. When the pit gets filled, some buckets of water are added to it. The pit is covered by a paste of soil and left for about three months. The microorganisms present in the soil decomposes the waste into useful manure.

Vermicomposting: In this method biodegradable waste is converted into manure by redworms. The compost made by redworms is of high quality and known as vermicompost.

Reuse: This is the way of reusing papers, plastics, glasses and metal objects in the possible ways. For example, a damaged plastic bucket can be used as a pot for growing a flower plant. So if we use these non-biodegradable waste for other useful purposes, we can reduce a great amount of garbage produced by us and this will help us in keeping the environment clean.

Reduce: This is the best way for disposal of waste. It involves reducing the amount of waste we produce. If there is less waste, then there is less to recycle or reuse.