1. To understand mixtures and types of mixture.

2. To understand requirement and Importance of separation of components of a mixture.

3. To understand different methods of separation.

4. To understand that the choice of the method of separation depends upon the nature of the component of the mixture.

5. To understand the different types of solution.

6. To understand the concept of solubility.

Mixtures are absolutely everywhere you look. Mixtures are the form that are mostly found in nature e.g. rocks, air, or the ocean they are just about anything you find. They are substances held together by physical forces, not chemical.

Two or more substances (either elements or compounds) can be mixed together in any proportion and the resultant substances so obtained are called mixtures (impure substance).

Depending upon the nature of the components that forms the mixture we can have different types of mixtures.

(i) Homogeneous mixture: It is a mixture that has the same composition throughout, e.g. a solution of sugar in water. Such a mixture has two or more components.

(ii) Heterogeneous mixture: In such a mixture the particles of each component of the mixture remain separate and can be observed as individual grains under a microscope, e.g. mixture of grains and sand.

This type of mixtures contain physically distinct parts and have a non-uniform composition.

Most homogeneous mixture are also known as solutions and examples of these include air, coffees, and even metal alloys.

Requirement of Separation of a Mixtures

In everyday life, there are many situations in which people want to separate the parts of a mixture. For example, water that contains algae or fish, or dissolved chemicals from factories is not healthy for drinking purpose. Thus it is preferred to remove it from the water to make it suitable for drinking.

Depending on the mixture involved, separating the component parts can be easy or difficult.

Separation methods depends upon the nature of the constituents of the mixture.

To separate a mixture we have to use some property that one constituent of the mixture has and other do not.

Hand picking: It is the simplest method of separation of substances. This method is used only when unwanted material is in small quantity. Moreover, shape, size, or colour of the unwanted material is different from that of the useful materials. For example; pebbles, broken grains and insects are separated from rice, wheat and pulses; by handpicking.

Threshing: It is the process that is used to separate grains from stalks. In this process stalks are beaten to free the grain seeds. Sometimes this process is carried out with bullocks. In case of large quantities of grains, machines are used for threshing.

Threshing machine (w simply thresher), was a machine first I invented by Scottish mechanical engineer Andrew Meikles for use in agriculture. It was invented (c. 1784) for the separation of [grain from stalks and husks.

This invention is regarded as one of the key development of British agricultural revolution in eighteenth century.

Winnowing: This process is used to separate heavier and lighter components of a mixture by wind or by blowing air. This is commonly used method to separate lighter husk particles from heavy seeds of grains. It is also used tore move pests from stored grain.

In Ancient China method of winnowing was improved by mechanization with the development of the rotary winnowing fan, which used a cranked fin to produce the airstream.

Sieving: It is carried out with the help of a sieve. The fine particles pass through the holes of sieve while bigger particles of impurities remain on sieve.

It is used at home to separate impurities and bran present in flour. 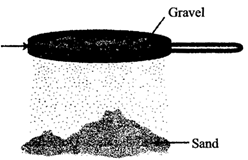 Sieving of wheat flour is not considered a healthy practice because wheat bran which is removed during sieving is a rich source of fibre.

Sedimentation: When a heavier component in a mixture settles after water is added to it, the process is called sedimentation. The substance deposited is called sediment. This method depends upon the difference in densities of the two component of the mixture. For example on keeping the tea with the tealeaves, aside for some time the tea leaves begin to settle down.

Doctors often instruct us to shake the bottle containing liquid medicines before use it is because some solid particles in these medicines settle down at the bottom of the bottle.

Sedimentation process is used in wastewater treatment, it removes solids that cannot be broken down or treated along with the liquid waste.

Decantation: When the liquid layer above the sediment is removed and the sediment is left behind the process is called decantation. For example when tealeaves settle down, the clear tea (liquor) from the top can be poured into acup.

The principle of sedimentation and decantation is used for separating a mixture of two liquids that do not mix with each other. For example, oil and water from their mixture can be separated by this process. If a mixture of such liquids is allowed to stand for some time, they form two separate layers.

The component that forms the top layer can then be separated by decantation.

If the solid dissolve in the liquid, decantation cannot be used to separate them..

Sedimentation can be speeded up by Loading. Alum is used for this purpose.

For example: The dissolved particles of alum load the fine clay particles in water. They become heavier and settle down quickly.

The insoluble solid is left behind at the filter paper. The solid left behind is called residue. The process is called filtration. Difference in size of particles in a mixture is used to separate them.

Every   time   a vacuum cleaner runs, it passes a stream of dust-filled air through a filtering bag inside the machine. Solid particles are trapped within the bag, while clean air passes out through the machine. 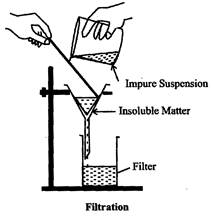 For example while making cottage cheese (paneer) at home solid paneer is separated from the liquid by filtration through muslin cloth a coffee filter separates solid coffee grounds from liquid coffee. Our water supply is filtered through a bed of gravel, sand and charcoal.

Special water filters are used in our homes, colleges and offices for providing safe drinking water. A simple home filter contains a porous candle made up of ceramic or china clay the water passes through the candle. Candle retains solid impurities but allows the clear water to pass through it in these filters a special type of light called ultraviolet light is used to kill germs in water.

A method of cleaning water for drinking, which is gaining popularity today, is reverse osmosis. Water is passed through special membranes. It has very fine pores through which water passes but not the impurities. Water purifiers using this technique are available in the market these days.

Evaporation is a method of separating a soluble solid from the solvent in which it is dissolved. Lemon juice, which is a solution of citric acid in water, separates by evaporation. Water evaporates off from boiling lemon juice. Eventually, only solid crystals of citric acid are left behind.

Sea water is collected in shallow ponds and allowed to evaporate in sun. Solid salt is left behind. Salt obtained from this process is not pure and it is purified by crystallisation process.

Crystallisation is used to purify solid substances. In this method pure substance is separated in form of crystal from its hot saturated solution by cooling.

In a clothes dryer, hot air is blown through the clothes, allowing water to evaporate very rapidly.

The Matki/Matka, a traditional Indian porous clay container used for storing and cooling water gets cooled in this due to evaporation.

Condensation: It is the process in which the vapours of water (or any other liquid) are allowed to cool and change to liquid state. It is the opposite of evaporation. For example: water vapour condenses into a liquid after making contact with the surface of cold bottle. The process of condensation is also present in air conditioners.

Water from the Earth enters the atmosphere due to evaporation from the oceans and transpiration from plants, as the water vapor moves higher in the atmosphere, it begins to cool down and condenses into liquid form and clouds are formed. That causes rain or snow fall, depending on the temperature, Condensation can often be wed to generate water in large quantities for human use. Many structures are made solely for the purpose of collecting water from condensation, such as Air wells and fog fences. 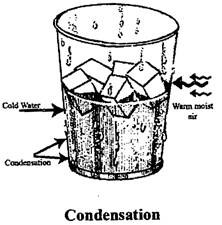 Distillation: Distillation is a method of obtaining pure liquid from a solution by using a special apparatus .In this process on heating a solution, liquid with low boiling point evaporates first. On cooling vapor condenses to give pure liquid-Distilled water used in lab is obtained by this method.

A homogeneous mixture of two substances is known as a solution. e.g., mixture of sugar and water. When a substance dissolves in a liquid, it breaks up into its individual molecules. These molecules spread out in between the molecules of the liquid. That is why the sugar-water solution tastes sweet.

Water can dissolve a large number of substances in it. It therefore is called a Universal solvent.

Examples of different types of solution:

Substances that dissolve readily in water are said to be soluble in water.

Substance such as sand do not dissolve in water are said to be insoluble in water.

Some gases such as carbon dioxide and oxygen are soluble in water. Solubility of oxygen in water allows the animals living in water such as fishes to survive.

Maximum amount of solute that can be dissolved in 100 ml of a solvent is called its solubility. It is expressed in gram/100 ml. Solution is an example of homogenous mixture.

On the basis of solubility solution can be further divided as:

Unsaturated: A solution that is capable of dissolving more of solute at the given temperature is known as unsaturated solution.

Saturated: A solution which is not capable of dissolving anymore of solute at a given temperature is called a saturated solution.

A saturated solution becomes unsaturated if it is heated i.e. larger quantities of a salt (i.e. solute) can bed is solved on heating a solution. 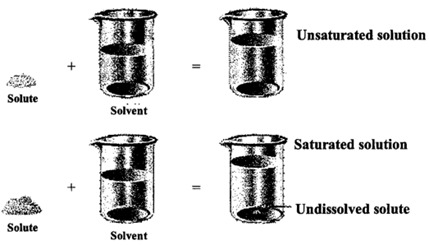 If we add any more solute to a saturated solution of the substance, it remainsundis solved and settles as solid at the bottom of the container.

Supersaturated solution: A solution is said to be supersaturated when it contains more of the solute than could be dissolved by the solvent under normal conditions. For example carbonated water.

Effect of Temperature on Solubility

Solubility increases with increase in temperature. A given amount of solid solute dissolves more quickly in hot solvent than in a cold solvent. For example sugar dissolves very fast in hot water than in cold water. That is why while preparing lemonade sugar is added before adding ice. 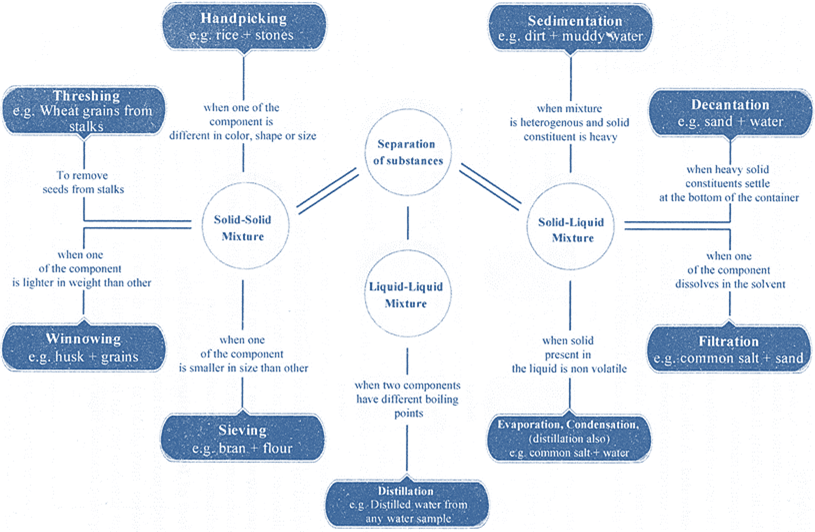