Nutrition in a Non Green Plants (without chlorophyll)

However, there are many plants in our surrounding which do not have chlorophyll such as, cuscuta, monotropa, etc. They all depend on heterotrophic mode of nutrition such as, saprophytic, parasitic and insectivorous.

Saprophytic plants live and grow on dead and decaying organic matters. It secretes enzyme to break down the complex organic compound into its simpler form for the absorption.

Look at the following picture of non-green (saprophytic) plants:

The plant which absorbs nutrition from its host plant is called parasite. Parasitic plants do not have either chlorophyll or leaves. Hence, they cannot perform the process of photosynthesis. They absorb nutrients made by the host plant and is fully dependent on host plant to meet that need.

Look at the following picture of parasitic plant: 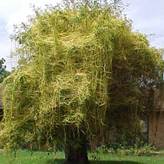 Some plants eat insects are called insectivorous plant. Pitcher of a pitcher plant traps insects and internal structure of pitcher break down the insects into small pieces which is digested by digestive juice secretes by the pitcher.

Look at the following picture of pitcher plant:

When two plants live together and share their food and shelter for each other, these relationship between the plants are known as symbiotic relationship. Fungi and roots of almost all vascular plants form mutualistic association called mycorrhizae.

Look at the following picture of lichen on a pine tree:

What is the function of root of a green plant?

(a) It absorbs water and mineral from soil

(b) It absorbs oxygen from air

Explanation Root of a green plant absorbs water and mineral from soil.

Which one of the following is an insectivorous plant?

Explanation Out of the given plants, pitcher plant is an insectivorous plant.

Green plants make their own food by the process of photosynthesis.

Sugar is the by-product of the process of photosynthesis.

Xylem tissues transport water and minerals throughout the plant.