Plants require water, sunlight, carbon dioxide and minerals for making their food. These nutrients in the plants are converted into glucose by the process of photosynthesis. The growth rate of a plant mainly depends on the availability of nutrients in the soil on which the plant grows. Lack of nutrients in the soil cause improper growth and shorter life-span of the plant. There are two modes of nutrition’s in plants. These are autotrophs and heterotrophs. Heterotrophic plants are further classified into three groups, saprophytes, parasite and insectivores. The living organisms, which make their own food by photo syntheses with the help of chlorophyll present in their body, have autotrophs mode of nutrition. The living organisms, which are unable to make their own food and depend on the autotrophs for their nutritional needs, is said to have heterotrophs mode of nutrition. In this chapter, we will study about the nutrition in different types of plants.

Water and minerals absorbed by the root of the plant are transported throughout the plant through its stem, which is called transportation or conduction. Stem of a plant gives support to the plant to stand on the soil. The xylem and phloem tissues in the stem help the plant to transport essential substances from one part to another.

Look at the following picture to understand the process of photosynthesis in a plant: 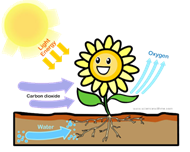 The following reaction takes place between the reactants during the process of photosynthesis.

Leaves are the part of a green plant where the process of photosynthesis occurs.

Absorption of Solar Energy through the Leaves of the Plant

Look at the following picture of the structure of chlorophyll in a leaf:

Chlorophyll transfers absorbed solar energy into the centre of the cell where, exchange of electrons between the water molecules and solar energy takes place. The result of the exchange of these electrons is the production of oxygen gas and hydrogen ions. ATP (adenosine triphosphate) is an enzyme. The function of ATP is to transport the energy within the cell for metabolism which is produced during the exchange of these electrons. ATP reduces a substance into its simpler form called, nicotinamide adenine dinucleotide phosphate (NADPH), which is used to convert the carbon dioxide into glucose for further use of the plant. Glucose or sugar is the product of the process of the photosynthesis.

The following reaction takes place during the process of respiration:

Carbohydrates is the product of respiration. Carbohydrates react with oxygen and oxidation of food takes place in the plant. Due to the oxidation of the food, carbohydrates break down into carbondioxide and water with releasing an amount of energy, which is used by the plant for their functions.

Function of Stem and Root in the Process of Photosynthesis

Stem and Root both play very important role in the process of photosynthesis.

Function of Root in the Process of Photosynthesis

Root of a plant covers large area for the search of huge amount of water and minerals for absorption. Water and minerals enter through the cap holes of the root. The mechanism of entering water and minerals is the same as that of a small strip of cotton placed in a cup of water, which gets wet after sometime, absorbing the available water. If minerals are not available for the absorption of the plant, specific type of symptoms appear on the different parts of the plant. For example, magnesium helps for the formation of molecules of chlorophyll. Therefore, yellow colour of leaves appear due to the deficiency of magnesium.

Look at the following picture of root of a plant: 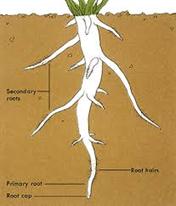 Function of Stem in the Process of Photosynthesis

Look at the following picture of transportation mechanism in a plant: 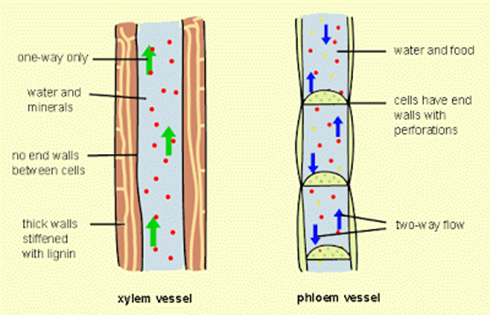 Requirement of Nutrients in a Plant

Plants obtain required nutrients from soil and air, carbon dioxide from air, oxygen from air and water from soil. Plants absorb nitrogen from soil in the form of nitrates ions  or as ammonium ions

or as ammonium ions

. Some bacteria can fix nitrogen directly from air. Absorption of potassium, calcium, iron, etc. in a plant is done in ionic form like,

Statement 1: Water and minerals are transported throughout the plant through xylem tissue.

Statement 2: Synthesized food is transported throughout the plant through xylem tissue.

Which one of the following is correct about the above statements?

(c) Both statements are true

(d) Both statements are false

Water and minerals are transported throughout the plant through xylem tissue. Therefore, option (a) is correct and rest of the options is incorrect.

Which one of the following products is made by the plant during the process of photosynthesis?

by the process of photosynthesis. Therefore, option (b) is correct and rest of the options is incorrect..