6th Class Science Materials Around us NCERT Summary - Things Around Us

NCERT Summary - Things Around Us

All the objects are made up of one or more materials. Materials may be classified in two categories:

· Anything that has mass and occupies space is called matter.

· The process of changing a solid into a liquid by heating is called melting. The melting of a substance takes place at a fixed temperature. This temperature is called the melting point of that substance.

· Ice melts at \[0{}^\circ C.\] Ice on melting forms water. On boiling water, forms steam. Steam is in a gaseous state. Most of the liquids keep on changing slowly into vapours at all temperatures. This process is called evaporation.

· On continued heating, the temperature of a liquid rises and starts boiling at a fixed temperature. This temperature is called the boiling point of the liquid. Water boils at \[100{}^\circ C.\]

· The process of changing vapour or a gas into a liquid by cooling is called condensation. For example, when water boils in a vessel, water droplets are formed due to cooling of steam on the lid and get converted into water.

· The process of changing a liquid into a solid on cooling is called freezing, as water on cooling turns into ice. \ 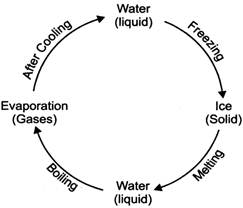 The molecules in all the three states of matter are similar, but they still differ in their states. The reasons are as follows:

States of all three types of molecules

Notes - Things Around Us