3. Poles of a magnet

Magnet was discovered about 4000 years ago. We observe that filings of some materials like iron, nickel, cobalt etc., cling to magnets, however other things around us like wood, plastic etc. are not affected by the presence of magnet near them. The name magnetite has been derived from magnesia and magnets are named after magnetite.

You must have often observed that when a refrigerator door is opened a little and left, it shuts by itself. Also many cupboard doors also click shut the same way. It happens because they have magnets inside. Thus we can define magnets as the materials which attract certain substances (magnetic) like iron, cobalt, nickel etc.

The ancient greeks observed electric and magnetic phenomena as early as 700 B.C. They found that a piece of amber when rubbed attracts pieces of straw or feathers.

All objects are not attracted to magnets. When we bring a magnet near various objects, some are attracted to the magnet and some are not.

The materials which get attracted to the magnets are called magnetic materials.

Iron, Cobalt and Nickel are some examples of magnetic materials.

Magnets help in case of mental unrest by applying the south pole of a weak magnet to the forehead for about 10 minutes daily.

POLES OF A MAGNET

The magnetic forces are strongest at the two ends of a bar magnet. These ends are called the poles of a magnet. There are two poles of every magnet and they are termed as North Pole and South Pole It is important to note that the two poles cannot exist independently. Poles always exist in pairs. So if a magnet is cut into pieces, then even the smallest piece of a magnet will have both the poles.

Remember: It is repulsion and not attraction is the sure tests for polarity of a magnet.

In the 13th century, sailors using lodestone as a compass to help them find their way across the seas.

A freely suspended magnet always comes to rest in the north-south direction.

The earth's magnetism exists due to its molten iron core.

There are two types of magnets

Electromagnets: The magnets in which the magnetism has been produced by passing electric current through them are called electromagnets.

Superconductors are the strongest magnets that are made from coils of wire.

Electromagnets behave as magnets so long as the current is flowing through them and the magnetism disappears as soon as the flow of current stops.

The strength of electromagnets depends on the magnitude of current flowing through them.

Earth’s magnetic field helps migration of birds from one place to another.

The magnet whose magnetism lasts for a long time or does not lose its magnetism is called permanent magnet.

The word Maglev stands for magnetic levitation. Maglev train is a train that uses magnets to float above a track. The principle of a maglev train is that like poles repel and unlike poles attract each other.

The magnets are arranged in a specific manner that moves the train along the guide way. Maglev train floats above the track, so it experiences very less friction. Thus, speed of a maglev train is very high exceeding 500km/h.

A permanent magnet can lose its magnetic properties i.e., demagnetised under following conditions:

In order to prevent magnet from getting demagnetised, a piece of iron called keeper is placed across the poles of the magnet. 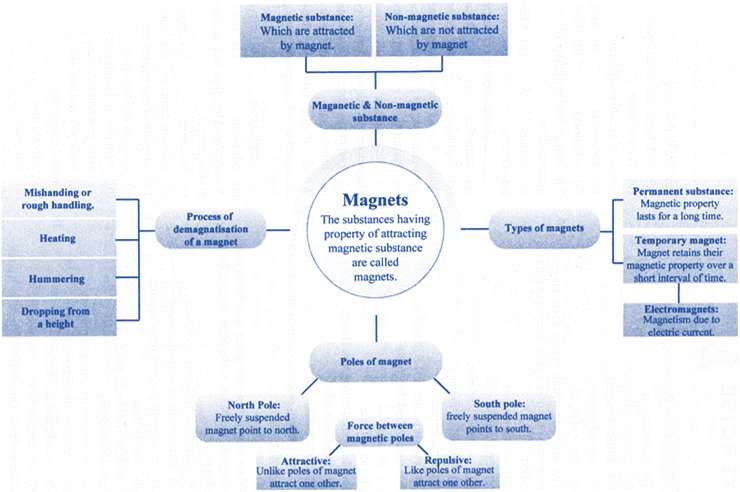