We see the colourful and beautiful world around us. Light helps us to see things around us. We cannot see light but light creates sensation of vision. We detect light with our eyes. Light is a form of energy.

SOURCES OF LIGHT - NATURAL AND ARTIFICIAL

The objects that give out light are called sources of light.

There are two types of source of light

Sometimes luminous objects give off light at different wavelength which is invisible. These materials are called fluorescent materials.

The objects which emit their own light are called luminous objects. For e.g.

The objects which do not emit their own light are called non-luminous objects.

An object which allows most of the light pass through it is called a transparent object. For e.g. Air, glass, water, etc.

An object which allows only a part of the light to pass through it is called translucent object. For e.g., Milky white plastic, frosted glass etc.

An object which does not allow light to pass through it is called opaque object.

Ultraviolet rays can go through translucent objects. Due to this a person behind this object can get a sunburn on a Sunny day.

Light travel in a straight line. It is known as rectilinear propagation of light.

If you see the flame through the holes at same level, the flame is visible but if one of the cardboards is displaced such that holes are not in straight line the flame of the candle will not be visible. This suggests that light travels in a straight line.

Artists from the sixteenth century onwards used a pinhole camera to help them get the correct colour proportions for a painting.

A pinhole camera works on principle of rectilinear propagation of light and pin-hole acts as a lens.

The box is closed from all sides and a forested glass sheet covers one side, containing a very small hole in the centre. An inverted image of the object is formed on it.

Shadow is longest in the early morning and in the late afternoon.

When light falls on an opaque object, it obstructs the path of light and shadow is formed. Thus shadow is the region of absence of light. 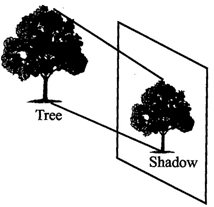 The main requirements for the formation of a shadow are:

(i) A source of light

(iii) A screen behind the obstacle.

Important characteristics of a shadow

(1) Shadow is formed when path of light is obstructed through an opaque object.

(2) Shadow lies to the opposite side of the source of light.

(3) The size of a shadow changes according to the position of source of lightw.r.t the object.

When rays of light after reflection meet then image of object is formed. It is an impression of an object.

Comparison of shadow and image:

There are 2 to 5 solar eclipses each year.

The Danjon scale is used to describe the darkness of a total lunar eclipse.

Solar and lunar eclipse are formed due to the shadows only.

We know that moon revolves around the earth. When moon comes in between the sun and the earth, then the shadow of moon falls on the earth creating darkness over a small region of earth. This incident is known to be solar eclipse.

Since the size of moon is smaller as compared to the sun, so the region of total darkness (umbra) is small and region of partial darkness (penumbra) is bigger

When during the revolution earth comes between the sun and the moon then shadow of earth is formed on the moon, due to which it appears to be dark.

When a ray of light falls on an opaque object, it bounces back. This bouncing back of light into the same medium is called reflection of light. Non-luminous objects are visible because they reflect light rays falling on them.

In early age mirrors are formed by polishing a volcanic rock called obsidian which was glassy and black.

Reflection of light from a smooth and rough surface 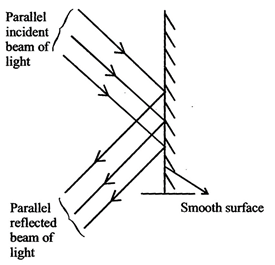 We are able to see an object due to diffuse reflection.

When a parallel beam of light falls on a rough surface then light is reflected in different direction, it is known as diffuse reflection or irregular reflection. 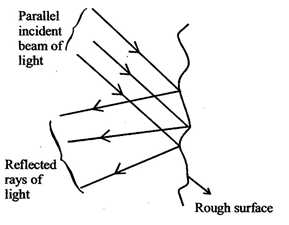 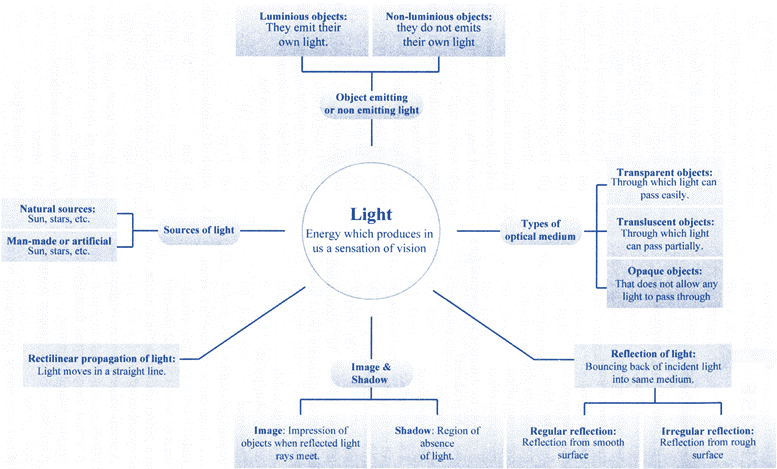