2. To understand the concept of fibers, fabric and yam

3. To know different sources to get fibers

5. To understand different methods to get fabric from yam

6. To know history of clothing

We wear clothes to protect our body against heat, cold, rain, dust and insects. At the same time we wear clothes to look good. That is why many of us want towear clothes that are in fashion.People in different regions of the world weardifferent kinds of clothes the kind of clothes people wear mainly depends onthe climate of the place. The traditional clothes worn by people in our countryvary considerably from region to region..

Fabrics are materials made from weaving, knitting, spinning fibres together.

Often the fibres are spun or wound together to form a thread before beingmade into a fabric. The nature of a fabric will depend on the fibres from which it is made and the way that they are arranged, and its properties will determine the applications for which it is suitable. Cotton, wool, silk etc. are examples of fabrics.

It is made up of fibres. Yarn is a long continuous length of interlocked fibres, suitable for use in the production of textiles, sewing, knitting, weaving, embroidery, and rope making. Thread is a type of yarn.

A fibre a is thread which is strong and flexible enough to make clothes.

Fibres can be broadly classified as natural fibres and synthetic fibres e.g.

Natural fibres are obtained from

Cotton is a soft fibre that is obtained from cotton plant. Cotton is generally grown in such places that have black soil and warm climate. The fruits ofcotton plant are called cotton bolls. They are of the size of a lemon. Aftermaturing cotton bolls open and we can easily see the seeds covered with cotton fibres. From cotton bolls, cotton is usually picked by hand. 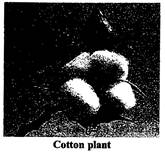 Advantage of cotton is that the sweat it absorbs evaporates. This results in cooling down of the body. Cotton clothes are therefore, comfortable to wearespecially in hot, humid weather.

In India cotton is sown between May and September in different parts of the country. The harvesting begins from October.

In India, the states of Maharashtra (26.63%), Gujarat (17.96%) and Andhra Pradesh (13.75%) and also Madhya Pradesh are the leading cotton producing states, these states have a predominantly tropical wet and dry climate.

Ginning of cotton: It refers to the process of separation of cotton fibres fromthe seeds. Ginning of cotton was previously done by hand but these daysmachines called cotton gins are used for this purpose.

A cotton gin is a machine that quickly and easily separates cotton fibers from their seeds.

Some historians are of the opinion that the Egyptians had cotton as early as 14,000 years ago. The earliest written reference to cotton is in India. Cotton has been grown in India for more than three thousand years.

Key raw materials to make Khadi-the fabric that was the heart of Mahatma Gandhi’s Freedom movement. Khadi may also include silk and wool, which is why it is cool in summers and it also provides warmth in winters.

China, India, U.S., Pakistan, Brazil are top five producers of the cotton in the world.

The earliest versions of the cotton gin consisted of a single roller made of iron or wood and a flat piece of stone or wood. Between the 12th and 14th centuries, dual-roller gene appeared in India and China.

Cotton ginning by hand and machines

Cotton fibres are then combed, straightened and form rope like strands calledsilver.

It is cultivated during raining season, m India jute is mainly grown in states of West Bengal (W. B), Bihar, Assam.

Jute plant is normally harvested when it is at flowering stage. To get jute, thestems of the harvested plants are immersed in water for a few days. The stemsrot and then fibres are separated by hand. This process is called retting.

Jute is a natural fiber with golden silky shine, and hence nicknamed as the Golden Fibre.

One hectare of jute plants consumers over 15 tonnes of \[C{{O}_{2}},\]several times higher than trees.

India with overall of -66% of world’s production tops the production of jute. Bangladesh with -25% lies at second position followed by China with -3%

Jute is 100% bio-degradable and recyclable and thus environment-friendly. Itcan be an effective substitute for plastic bags.

It is used to make sacks, ropes, handmade clothes, wall hangings and for makingstrong packing materials.

SOME OTHER IMPORTANT PLANT FIBRES

It is the fibre obtained from the outer cover of the fruit of the coconut palm.

It is obtained from stem of flax plant.The fabric made from flax fibre is calledlinen.It is used for making clothes, ropes and high quality paper.

Sisal fibres are obtained from the leaves of the sisal plant. These fibres areused in the production of ropes, nets and matting.

Ramie is obtained from the stem of the Ramie plant. Ramie fibres are used inthe production of canvas, sewing threads, fishing nets, and parachutes.

Hemp fibres are obtained from the stem of the hemp plant. Hemp plants growbest in loamy soil. Hemp fibres are used in the production of ropes, carpets, nets, clothes, and paper. These fibres are also used to make a special kind ofplastic.

Wool and silk are examples of animal fibres.

Wool is the fibre derived from the hair of sheep and some other animals like angora rabbit, yak, Llama, camels and musk oxen.

Silk is obtained from the cocoon of the silkworm. Silkworms are fed on the leaves of the mulberry trees. Cocoons are dissolved in boiling water in orderto extract individual long fibres.

Synthetic fibres are not obtained from plants or animals. These are made from chemical substances. Rayon, nylon and Dacron are examples of synthetic fibres.

Clothes made from synthetic fibres are strong and do not wrinkle easily. Theyalso dry easily.

They have less air spaces in them than natural fibres they also cannot absorbsweat easily.These properties make them unsuitable for hot and humid weather.

The process of making yam from fibres is called spinning. To get cotton yam, fibres from a mass of cotton wool are drawn out and twisted. This brings fibres together to form a yam.

Hand spindle: It is a simple device used for spinning of cotton. It is called taldi.

Charkha: It is also a hand operated device used for spinning of cotton.

The charkha was both a tool and a symbol of the Indian independence movement. When India was a colony of Britain, Indian cotton was shipped toBritain and the Indians had to buy it back as fabric. Gandhi promoted spinningas an act of independence. He encouraged people to wear self spun clothes and reject the cloth made in Britain.

For making fabric from yam following two processes are used

The process of arranging two sets of yams together to make a fabric is calledweaving.

The device used for weaving is called looms

For knitting, a single yam is used to make a piece of fabric. Knitting is done by hands and also on machines.

Different types of needles are used for knitting purpose.

The first power loom was designed in 1784 by Edmund Cartwright and first built in 1785.

One of the earliest known examples of knitting (formed on  two sticks by pulling loops through loops) were a pair of cotton socks found in Egypt from the first millennium A.D.

The knitting machine was invented in 1589 (during the reign of Queen Elizabeth) by William Lee, a clergyman.

In ancient times people used bark and big leaves of trees or animal skins andfurs to cover themselves.

About 30,000 years ago, people started using animal skins for clothing. Animalskins were either worn as capes thrown around the shoulders or as two skinstied at the shoulder. 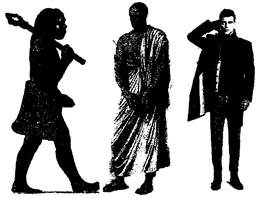 It is believed that wool was the first animal fibre to be made into cloth. People started using sheep for wool about 6000 years ago.

After people began to settle in agricultural communities. They leant to weave twigs and grass into mats and baskets. Vines, animal fleece or hair were twisted together into long strands. These were woven into fabrics.

Thousands of years ago, people learned how to obtained fibres from wildplants. These fibres were spun into thread and made into clothes.

Archaeologists have discovered fragments of plant fibres in Switzerland, which date back to around 8000 BC. It indicates that people began to weave fabrics around 8000 BC.

Early Indians wore cotton fabrics. In India cotton grew in the regions nearriver Ganga. Flax is a plant that gives natural fibre. In Egypt, in ancient times, cotton as well as flax were cultivated near river Nile.

In ancient days, stitching was not known and people simply draped the fabrics around different parts of their body Even today, Saree, dhoti, lungi or turbanis used unstitched.