Clothes, which protect us from rain, cold etc. are made of fibres. Fibres are obtained from plants and animals. Fibre from plants is called plant fibre and fibre from animal is called animal fibre. Both plant and animal fibres are called natural fibre. First silk fibre was discovered accidently in China. Synthetic fibre is the composition of chemicals hence called manmade fibre. In this chapter we will study about the source of fibre and its use.

Note: China is the leading producer of silk products in the world.

Wool is an important and commonly used animal fibre which is mainly obtained from sheep. It is soft and wavy (curly). Wool is widely used for knitting sweaters. It traps air more than that of cotton fibre hence keep our body warm.

Look at the following pictures of wool yielding animals:

How wool is obtained from sheep

Wool from sheep is obtained by different process. The process by which thin skin of sheep along with its dense hair is removed is called shearing After obtaining the fleece of sheep, it is washed and dried because, dust particles are present on the body of the sheep. The process by which fleece from sheep is washed and dried is called scouring. Hairs on the fleece of sheep is not uniformly distributed. Some parts of fleece are dense, some are not Length of hairs, s also not uniform. In the process of sorting, fleece of sheep is separated m sections according to their quality, like separation of dense hair long and short hair, etc. Fleece of sheep cannot be obtained in desired colour hence desired colour of wool is obtained by dyeing the fleece. Combing method is used for spinning the yarns of wool. It removes dust particles which present in fleece. A comb which having metal teeth is used for combing. Long woolen fibre is twisted or spun into thick yarn is called wool and short woolen fibre spun into fine yarns. The process by which long and short woolen fibre is twisted into thick and fine yarn is called spinning.

Look at the following process to obtain wool from sheep: 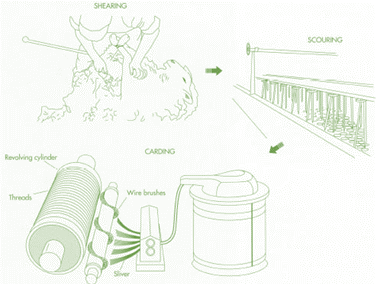 Which one of the following steps comes first in the production of woolen yarn from sheep?

Fleece of sheep is obtained by the process of shearing. Therefore, option (B) is correct and rest of the options is incorrect.

Choose the correct one about the sheep.

Sheep eats only plants product hence called herbivores. Therefore, option (c) is correct and rest of the options is incorrect..