Electricity plays a very important role in our everyday life. It is one of the most useful forms of energy used by us. We use electricity for various purpose like to heat or cool our rooms, to run our televisions, to light up our houses etc.

Various electrical appliances are used by us. Let us discuss the source of the electrical energy and how the appliances work in an electric circuit.

The rubbing induces a build-up of static electrical charge. The rain drops and hailstones are usually negatively charged acquired by rubbing.

This happens because on rubbing a glass rod with silk or ebonite rod with far, there is a transfer of charge from one body to another. The charges acquired by glass rods are of same nature but charge acquired by ebonite of different nature.

So all these observations lead to a conclusion that

(i) There are only two types of charges viz. positive (proton) and negative (electron) charge.

On average, a current of 20,000 A flows in a lightning bolt, even if the bolt lats for only a fraction of second. 50 mA is enough to be fatal for a human.

The orderly motion of electrons in a particular direction gives rise to electric current.

Mathematically, electric current (I) is defined as the rate of flow of charge.

Battery was developed by Alessandro valta about 200 years ago. He discovered that when two strips of different metals were put in a sulphuric acid solution and connected with a wire, electricity began to flow.

Electric cell is a device which converts chemical energy into electrical energy.

It is a source of electric current. It has two terminals viz. positive and negative.

Dry cell is the most commonly used cell in torches, transistors, toys, calculators and other electrical appliances. 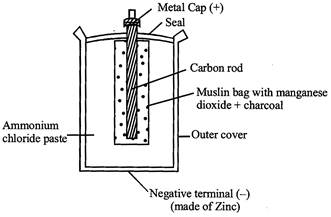 The chemicals in the cell react to produce current. A dry cell supplies current till the chemicals are exhausted and cannot react anymore.

The combination of more than one cells is termed as a battery. Battery is used when one cell cannot provide sufficient amount of current to the appliance.

Electric cell can produce strong electric schocks of around 500 volts, for both self defense and hunting. 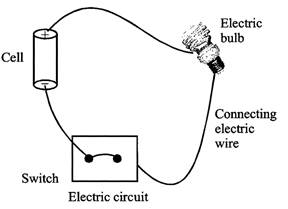 It is important to note here that the bulb will glow only if positive and negative terminal of an electric cell are connected to the two terminals of the bulb.

Closed circuit: The electric circuit through which the current is flowing, is known as closed circuit. When the switch is ON then the circuit is closed.

DIFFERENT COMPONENTS OF AN ELECTRIC CIRCUIT

1.          Connecting wire: A metal wire usually made of copper or aluminium acts as a connecting wire. It connects all the components of an electrical circuit.

3.       Battery: A combination of two or more cells joined in series is called a battery. Symbol of battery:

4.       Plug key (or switch): A plug key is the electric switch in the circuit which controls the flow of current. Symbol of

5.       Ammeter: It is an instrument used for measuring the magnitude of current in an electric circuit. Symbol of ammeter

The materials which allow the electric current to flow through them are called conductors. Most of the metals conduct electricity, so they are used as connecting wires. For e.g., silver, copper, aluminium, etc. Silver is the best conductor of electricity.

Materials which do not allow the electric current to flow through them are called insulators. For e.g., plastic, rubber, bakelite, leather etc. are insulators. 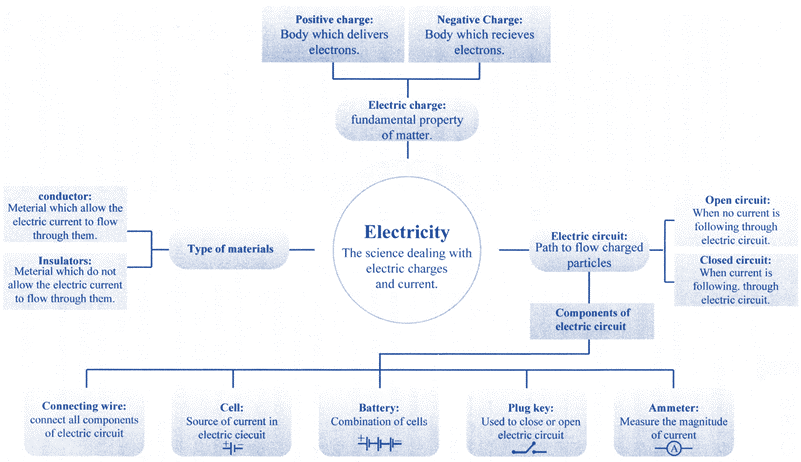