Closed Circuit: When there is no gap in an electric circuit or the normal path of current has not been interrupted, the circuit is known as closed or complete circuit.

Open Circuit: When there is a gap in an electric circuit or the normal path of current has been interrupted, the circuit is known as an open circuit or incomplete circuit.

The substances which allow electric current to pass through them are called conductors. For example, copper, gold, silver, aluminium, iron, etc. are good conductors of electricity.

The substances which do not allow electric current to pass through them are called insulators.

An electric cell is a device which can generate electric current in a closed circuit. It is small and easily portable so it is very useful for us. There are a number of machines like watches, calculators, toys, cars, etc. in which electrical cell is used to produce electric current. Dry cell, button cell, solar cell are the examples of electric cell.

A dry cell is a cylindrical device in which a number of chemicals are stored. It has a metal cap on one side called positive terminal and a metal sheet at other side called negative terminal. It produces electric current from the chemical stored inside it.

An electric bulb is a device which produces light energy using electrical energy. It consists of a glass bulb fixed on a metal case, a thin wire fixed between the two thick wires called filament of the bulb and the gas filled inside the glass bulb. When electric current passes through the filament, it emits light which makes the bulb glow.

Magnet is a substance which attracts magnetic materials such as iron, nickel, steel and cobalt. Magnets are of different shapes and sizes. For example, U-shaped magnet, cylindrical magnet, bar magnet, etc. Each magnet has two poles, south pole and north pole.

It is a magnetized needle pivoted freely at a point. It is used to find the direction.

Force of Attraction and Repulsion Between Magnets 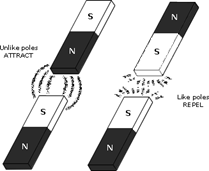