The human skeleton or skeletal system is made up of 206 bones. A baby has 300 bones in all. But as it grows, some of the bones fuse together or join. Before we learn more about bones and the joints where they are joined together, let us take a look at the functions of the skeletal system.

The bones of our body act as a framework or give it shape. Without bones, our body could be a shapeless mass, e.g. like the body of a snail. The bones give our body support, like the pillars of a building or the frame over which an idol- maker makes an idol. The bones also protect delicate internal organs. For example, the skull protects the brain, which lies inside it, and the ribs protect the heart and lungs. The third function of the bones is to help us move. It is the movement of the bones that helps us bend, run, walk, and so on.

Twenty-two bones make up the skull. These are the hardest of all the bones in   the body. Some of these form the cranium, or the cover for the brain. The rest are the facial bones, which give shape to the face. Two hollows, or sockets, formed by the facial bones protect the eyes. All the bones of the skull except the one forming the lower jaw are fixed firmly, and cannot move. Only the bone of the lower jaw is capable of movement, which helps us eat and speak.

Fig. Most of the bones of the skull are fixed. Only the lower jaw can move.

The spine is also called the vertebral column or backbone, the spine consists of 33 small bones known as vertebrae (singular: vertebra). The vertebrae are hollow at the centre and are joined together to form a tube, through which runs the spinal cord.

Of the 33 vertebrae, seven are in the neck or down to the upper chest, 12 vertebrae are extended to the back, and five making up the lower back between the hips and chest. The last nine vertebrae are fused into two segments, coccyx and sacrum. They are fixed and make us to sit properly. Coccyx is also called tail bone. The vertebrae in the neck allow us to move our head from side to side and bend the neck forward and backward. The vertebrae also act like a spring, cushioning the head, so that the brain does not get jerked around when we run or jump.

Running through the centre of the chest is the breastbone, or sternum. Joined to it are 10 pairs of strong, flexible bones called ribs. The ribs curve around and join the chest vertebrae at the back, to form a protective cover for the lungs and heart, called the ribcage. Another two pairs of ribs are joined only to the backbone. These are called floating ribs. The ribs are attached to the sternum in such a way as to allow the ribcage to expand when we inhale, or breathe in.

The bones of the forearm are also attached to the wrist, which is formed by eight small bones. Five long bones form the palm. They are joined to the wrist bones at one end and the finger and thumb bones at the other end. Each finger has three bones, while the thumbs have two bones. 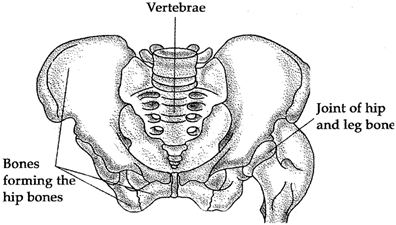 The pelvis, or rather the pelvic girdle, helps us walk, run, stand and sit. It supports the weight of the body when we stand or sit and transmits the movement of the legs to the whole body.

The bones of the foot and ankle are arranged in such a way that they form an arch or bridge. This arch helps to support the weight of the body when we stand, walk or run. People who do not have this arch, or are flat-footed, find it difficult to walk or run for long stretches.