In such type of problems, a simple figure is given followed by four other figures.

Only one figure out of the four figures embeds the given figure.

A candidate is required to choose that figure which embeds the given figure.

1.         Choose a figure from the four options in which the figure (X) is exactly embedded as one of its part?

The figure (X) is exactly embedded in figure (a).

So, the correct option is (a).

This section deals us with the following types of problems.

Formation of a Figure from its Segments:

In such type of problems, all the parts to form a figure are given.

A candidate requires to identify the figure so formed out of the four options.

Choosing a Pattern which has the same components as a given Pattern.

In such type of problems, a pattern of several components is given.

Only one pattern out of four option patterns contains the same components.

A candidate requires to choose such pattern.

The parts of figure in option (a) are in figure (X).

Components of figure (X) and figure (b) are exactly same.

Such type of problems are on the basis of the geometrical figures.

A candidate is required to identify the figure which can fit into each other to form a square.

4.         Select a figure from the given four options which fits exactly into figure (X) to form a complete square.

Figures (X) and (c) together form a square (see below).

So, the correct option is (c).

In such type of problems a set of some figures is given.

A candidate requires to classify these figures into groups on the basis of some common properties amongst them.

5.         Group the following figures into three classes regarding common properties amongst them. 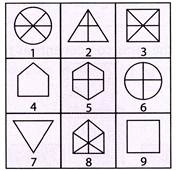 2, 5, 6 each figure is divided into 4 parts by two mutually perpendicular lines.