Extraction of meaningful information by collection of data, organising, summarizing, presenting and analyzing the data is a branch of mathematics called statistics. Data is defined as the particular information in numeric form.

If the data is collected by the investigator herself/himself with the specific purpose, then such data is called the primary data.

If the data collected by someone else other than investigator are known as secondary data.

The data can be represented into classes or groups. Such a presentation is known as grouped data. Firstly it may arrange in ascending or descending order and then divide into groups.

Raw data is the data which is not arranged in any particular fashion or pattern. It is the original form of data.

It is a number which tells that how many times does a particular observation appear in a given data.

5 occurs three times in the given data.

A tabular arrangement of data sharing their corresponding frequencies is called a frequency distribution.

The group in which the raw data is condensed is called a Class interval. Each class is bounded by two figures.

Let us observe the marks obtained by 25 students in Mathematics as follows:

We observe that there are few students who get same marks, e.g., 74 marks is obtained by 2 students, 53 is obtained by 5 students etc. Let us represent them in a frequency distribution table given below:

We can further group them into classes as given below:

AVERAGE OR ARITHMETIC MEAN IS DEFINED AS FOLLOWS

A pictograph is the way of representing data using pictures.

Reading a pictograph helps in intrepreting the pictograph so as to get information from it.

(i) Find the number of people preferring Red colour.

(ii) How many liked Grey colour?

When numerical data is presented as columns on a graph, this graphical representation of data is called a bar graph.

In a bar graph, the columns are drawn such that:

CONSTRUCTION OF A BAR GRAPH

Example: The following table gives the umber of students in Class VI in a school during academic years 2008 to 2013.

Represent the above data by a bar graph. 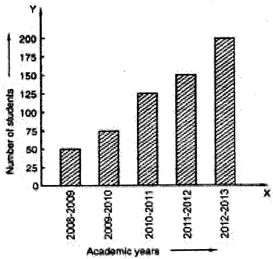 (i) What is the information given by the bar graph?

(ii) In which month was the sale of the book maximum?

(iii) In which month was the sale of the book minimum?

(i)  The bar graph shows the number of copies of Physics for Class XII sold by a bookseller during the period from April 2014 to August 2014.

(ii) The sale of the book was maximum in the month of April as the height of the rectangle corresponding to April month is maximum. 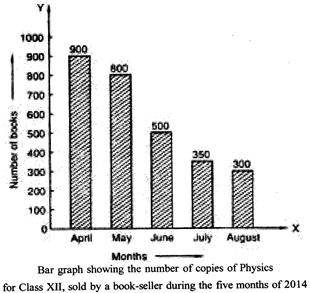 (iii) The sale of the book was minimum in the month of August as the height of the corresponding rectangle is minimum.