A geometrical figure which indicates position but not the dimension is called a point. A point does not have length, breadth and height. A point is a fine dot. P is a point on a plane of paper as shown below.

A set of points which can be extended infinitely in both directions is called a line.

A line of fix length is called a line segment.

In the above figure RS is a line segment and the length of RS is fixed.

A ray is defined as the line that can be extended infinitely in one direction.

In the above figure AB can be extended towards the direction of B. Hence, called a ray.

Note: A line segment has two end points, a ray has only one end point and a line has no end points.

Angle is formed between two rays which have a common point.

Vertex or common end point is 0.

OA and OB are the arms of

The name of the above angle can be given as

The unit of measurement of an angle is degree (°)

is called an acute angle.

An angle of measure

is called a right angle.

An angle whose measure is between

is called an obtuse angle.

An angle whose measure is

is called a straight angle.

An angle whose measure is more than

is called a reflex angle.

Two angles whose sum is

is called the complimentary angle.

Complementary angle of any angle

Two angles whose sum is

Supplementary angle of any angle

Two angles are said to be adjacent if they have a common vertex and one common arm. In the following figure

Two angles are said to be vertically opposite angles if they are formed at the intersecting point of two lines.

In the figure given above,

are vertically opposite angles. They are formed by intersection of AB and CD.

are vertically opposite angles,

Pair of vertically opposite angles are always equal.

In our day to day life we come across so many things around us which seems to be divided into two equal halves and both the halves look like in exact correspondence or position along an imaginary line. Take a look at the following figures 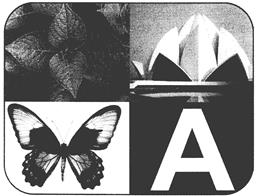 If we fold these figures along an imaginary line, we will find that both the halves are mirror images of each other. The very common term used in our day to day life for these type of figures is "symmetry". So, symmetry occurs when one shape becomes exactly the same or both the figures overlap each other. Such types of figures are called symmetrical figures.

v  A line of symmetry divides a figure into two equal halves.

v  A figure can have more than one line of symmetry.

v  A figure cannot have any line of symmetry.

Which of the following figures does not have any line of symmetry?

Explanation: Option (d) does not have any line of symmetry as no imaginary line can be drawn in this figure to divide it into two equal halves.

How many line(s) of symmetry regular does a regular octagon can have?

Solution: A regular octagon have 8 lines of symmetry/ which is shown below