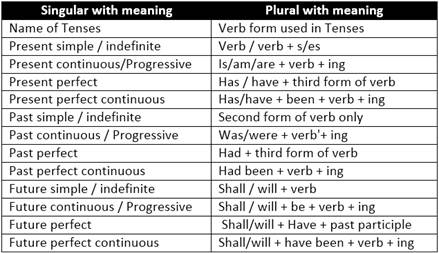 3. The simple Present tense is used (A) To express a habitual action. For example: I get up every day at five o'clock. (B) To express general truths.

For example: Fortune favours the brave. (C) In vivid narrative, as substitute for the simple past. For example: Immediately the Sultan hurries to his capital. (D) To indicate a future event that is part of a fixed programme or time table. For example:  The train leaves at 5:20 am. Note: We can also use will leave in place of leaves. (E)  It is used to introduce quotations. For example: Keats says, 'A thing of beauty is a joy forever'. (F) In exclamatory sentences beginning with here and there to express what is actually taking place in the present. For example: Here comes the bus! (G) When two actions of the future are being talked about, one dependent on the other, the former action is represented by present simple and the latter by future simple. For example: We shall go when the child comes back home.

4. The present continuous tense is used (I) For an action going on at the time of speaking. For example: The boys are playing cricket in the ground. (II) For a temporary action that may not be actually happening at the time of speaking but was happening in the recent past and is still happening in recent future. For example: I am reading Sidney Sheldon now a days. (Ill) To express changing or developing situations. For example: India is progressing day by day. (IV) For an action that is planned or arranged to take place in the near future. For example: I am going to cinema tonight. Note: But it is not good to use the present continuous for slightly distant future. So, don't say (a) I am going to cinema next week. Rather, use the future simple. So, it is better if you say (b) I will go to cinema next week. (V) When the reference is to a particularly obstinate habit, the present continuous is used instead of present simple. An adverb like always, continually, constantly is also used. For example: It is no use scolding him; he always does what is forbidden. (Incorrect) Note: that his doing what is forbidden has become a die-hard habit. The habit persists in spite of advice or warning. So, we should use the present continuous. For example: It is no use scolding him; he is always doing what is forbidden. (Correct)

7. The simple past tense is used (I) To indicate an action completed in the past. Generally, adverbs or adverb phrases of past time are used in the past simple tense. For example: (a) The steamer sailed yesterday. (b) He went home some time back. (II) To express imaginary present situations or imaginary future events that may not happen. For example: (a) If I had longer holidays, I would be very happy. (b) If I got rich, I would travel all over the world. (Ill) When this tense is used without an adverb of time, then time may be either implied or indicated by the context. For example: I didn9! sleep well. (i.e., last night) (IV) For past habits 'used to' is added to the verb. For example: She used to carry an umbrella.

8.  The past continuous tense in used (I) To denote an action going on at some time in the past. The time of the action may or may not be indicated. For example: (a) It was getting darker. (b) We were listening to the radio all evening. (II) When a new action happened in the middle of a longer action. In this case Past simple and Past continuous are used together. Past simple is used for the new action. For example: The Light went out while I was reading. (Ill) For persistent habits in the past. For example: She was always chewing gum.

9. The past perfect tense is used when two actions happened in the past. In this case it is necessary to show which action happened earlier than the other. Here past perfect is used for the action, which happened earlier. For example: (a) When I reached the station the train had started. (b) I had done my exercise when Hari came to see me.

11. The simple future is used for an action that has still to take place. For example: (a) I shall see him tomorrow. (b) Tomorrow will be Sunday.

12. The future continuous tense (I) represents an action as going on at sometime in the future. For example: I shall be reading the paper then. (II) Represents the future events that are planned. For example: He will be meeting us next week.

13. The future perfect tense is used to indicate the completion of an event by a certain future time. For example: I shall have written my exercise by that time.

14. The future perfect continuous tense indicates an action represented it being in progress over a period of time that will end in the future. Generally time period is mentioned along with it. For example: By next July we shall have been living here for four years.

15.   Event occurring at the same time must be given in the same tense. For example:  When he fainted his brother was with him.

20. In case of conditional sentences 'had' and 'would have' are used. For example: If I had met him I would have invited him.