A preposition is a word placed before a noun or a pronoun to show the relation of a person of a thing with something else. For example: in, of, off, etc.

There is a cow in the field.

?In? shows the relation between the cow and the field.

Which shows simply the relation of a person or thing with something else. For example: at, by, from

It is generally formed by prefixing a preposition to a noun, an adjective or an adverb. For example: about, behind, underneath

They are the groups of words used as a single preposition. For example: in accordance with, in place of

The words which are similar to present participles of verbs are sometimes used as prepositions, they are called participle prepositions. For example: barring, concerning, etc.

Concering (= about) yesterday?s fire, there are many rumours in the bazar. 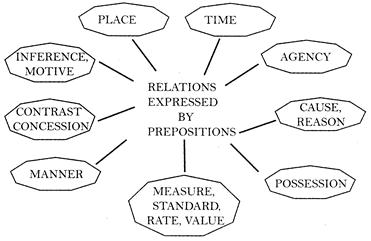 Went around the world.

Ran across the road.

Cut it with a knife.

He was stunned by a blow.

There was no money on him.

A man of means.

I am taller than you by two inches.

Light emanates from the sun.

For example: We stayed in Mumbai./We stayed at Mumbai.

For example: I saw him at the baker?s.

For example: He lives in Tanga street at house no. 17.

For example: The dog is lying on the floor.

For example: He slept till eight o? clock.

For example: Ramu killed two birds with one shot by his gun.