The name of a person, place or a thing is called noun. For example: Taj Mahal, book, Arun, etc. 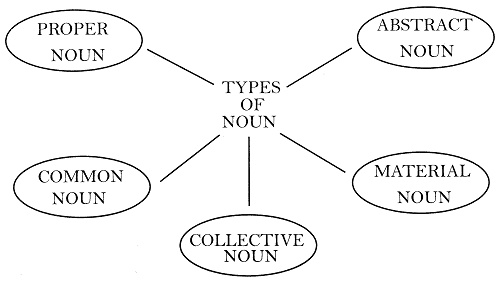 The name given to a particular person, place or thing is a proper noun.

Kolkata is a large city.

Grant is reading the book.

A noun that gives a common name to person, place, animal or thing is called common noun.

Common noun which can be counted is called countable noun.

Girls are going to the school.

There are many flowers on the plant.

Common noun which cannot be counted is called uncountable noun.

Take a glass of milk.

Water is necessary for life.

A collective noun is the name of a collection of persons or things taken together as a single unit.

Our team won the match.

The noun that is used for the raw substance of which things are made is called material noun.

The glass is made up of steel.

The jewellery is made up of gold.

The noun that is used to describe action, state or quality is called abstract noun.

Laughter is the best medicine.