As we have already studied in the previous classes that "a device, on which images are generated by the computer's video adapter is known as monitor". Here the monitor is connected by the video adaptor by a cable. Basically monitor contains two types of screen, color screen and monochromic screen. Monitor that generally displays 256 colors from a selections of 256,000 choices are called color screen whereas the monitor which displays only a single color is known as monochrome which display any multimedia object or text graphics in a single color usually black, white, green or amber. (See Figure 6.1.10) 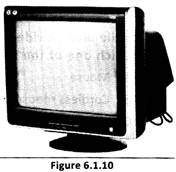 A number of display devices are available, which generally vary from one to the other on the basis of several key factors, may be their physical design or a display technology.

These display devices are commonly categorized as:

The LCD (Liquid Crystal Display) is one of the devices which is generally used for numerical indicators, such as in digital watches, calculators and in many others. Basically these types of display devices are very useful in those devices which are battery powered devices because they require a very small amount of current. Now a day, LCD display is widely used for the text and graphics output after some modifications.

The CRT is a display device which is used in mostly television and computer display screen. Generally the CRT (Cathode Ray Tube) refers technically to an electronic vacuum tube applying beam of electrons.

The TFT (Thin Film Transistor) is one of the popular technologies in the field of electronics now a day. Many companies have adopted this technology to enhance the color screen. This technology is also known as Active Matrix.

Printer is one of the primaries output devices which are used to create a hard copy of any of the soft copy weather it may be a text or any picture. Generally it is one of the useful and convenient methods for delivering information using printed character. Printer s classified into two categories. (See Figure 6.1.11)

Those printers which are using a thermal, magnetic or laser technology are generally known as non-impact printers, such as Ink Jet printer. Electromagnetic printer, thermal printer and Laser printers. the first laser printer was developed by Xerox Corporation in 1971. It uses laser ream and an electro photographic drum to develop images on paper. The quality of printing by laser printer is high. Inkjet printer was developed by Canon. It places vary small droplets of ink onto a paper to create an image. The diameter of dots is between 50 to 60 microns.

Monitor is an output device which is used to display the output. Which of the following types of monitor uses Active Matrix technology?

(D) LCD and TFT are based on Active Matrix technology.

(A) LCD is used for numerical indicator and based on active matrix technology.

(B) CRT is based on vacuum tube.

(C) TFT is based on Active Matrix technology.

Which one of the following types of monitors uses vacuum tube for applying a focused beam of electrons?

(B) CRT refers technically to an electronic vacuum tube applying a focused beam of electrons.

(A) LCD is used for numerical indicator and based on active matrix technology.

(C) TFT is based on Active Matrix technology.

Printer is an output device that gives the hard copy of your program output. The output may be text or picture. They are of two types. Impact printer and Non Impact printer. Which one of the following is an example of Impact printer?

(B) Daisy wheel printer is an impact printer.

(A) Thermal printer is a non impact printer.