The history of computer starts with the birth of abacus. Basically it is a wooden rack holding horizontal wires with beads strung on them. It was implemented around 2000 years ago. Charles Babbage is called the father of computer. In 1822 Babbage began to design an automatic mechanical machine called difference engine. Basically it is a type of counting machine. He also invented another machine called Analytical Engine. The Analytical Engine could store information on punched cards.

Commonly we can divide the journey of computers in five generations. Each of the generations is explained in the following points.

First generation computers, such as UNIVAC (Universal Automatic Computer) and ENIAC (Electronic Numerical Integrator Analyzer and Computer) were very large and took huge space because they used vacuum tubes for circuits and magnetic drums for memory storage. They consumed large amount of electricity and generated a lot of heat. They used machine language. (See Figure. 6.1.1) 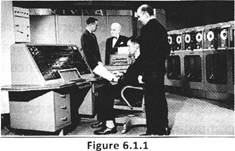 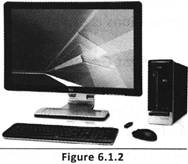 (A) Analytical Engine is a storage machine.

(C) Charles's counting machine is not invented yet. It is a wrong name.

(D) Abacus is a counting machine which was developed in China.

Second generation computers are faster and cheaper in comparison of first generations computer. They used:

(A) Transistor and microprocessor

(B) Magnetic core and silicon clip

(A) Second generation computers were not used transistors only.

(B) Second generation computers were not used magnetic core only.

All generations of computers were based on different technologies such as vacuum tubes, transistors and microprocessor. Which one of the following generation computers used integrated circuits?