All organs work together to perform functions for the body. A group of organs doing some particular jot for the body form an organ system. 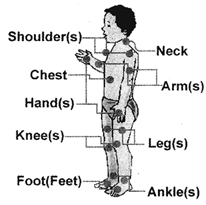 Respiratory system is responsible for carrying oxygen from the air to the bloodstream. Oxygen is necessary for human life.

Digestive system breaks the food we eat into smaller substances. After digestion, food can be used for producing energy.

Skeletal system gives shape to human body and helps in the movement.

Circulatory system helps in transportation of nutrients and other substances to various parts of the body.

Skull consists of 28 bones which protects the brain. All bones of skull are immovable except the lower jaw. With the help of movable lower jaw, we can talk and eat. In lower and upper jaw, we have teeth for cutting and chewing food.

All human beings have two pairs of limbs: the forelimbs (arms) and hind limbs (legs). Thigh bone or fermur is the longest bone in the body.

Functions of the Skeletal System

The skeletal system has the following functions.

It gives shape and support to our body. Without the skeleton, our body would be floppy like a jelly. Forget about walking, we would not even be able to stand.

It protects our soft internal organs.

(i) The skull protects the brain.

(ii) The rib cage protects the heart and the lungs

It allows the movement of different body parts.

Bones contain marrow, where our blood cells are made.