Example: If you hold a thread taut between two hands, it represents part of a line.

Example: A piece of paper represents a plane, Top of a table represents plane, etc.

Passing through a point, an infinite number of lines can be drawn. 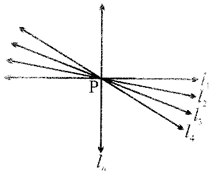 These lines are also called CONCURRENT lines and the point P is called point of concurrence.

Three points A, B, C in a place are collinear if they lie on the same straight line.

If this equality holds, then points are collinear.

If this equality doesn?t hold, then points are non-collinear.

Angles in a triangle

A plane figure bounded by three line segment is called a triangle.

In a right-angle\[\Delta \], side opposite to right \[\angle \]is called hypotenuse. Other two sides are called base and perpendicular. The relation between these sides is given by Pythagoras as

Type of Quadrilaterals are as follows:

(i) Trapezium: A quadrilateral having only one pair of parallel sides

(ii) Isosceles trapezium: It is a special type of trapezium in which non-parallel sides are equal i. e. \[AB||CD\] and\[AD=BC\]

(iii) Parallelogram: A quadrilateral having both pairs of opposite sides are parallel i. e.,\[AB||CD\]and\[AD||BC\]

(iv) Rhombus: It is a special type of parallelogram in which all side are equal

Also, \[\text{ A}C\bot BD\](i.e. diagonals are perpendicular to each other)

OP is called radius of a circle

Since infinite line segments can be drawn through O, therefore, numbers of diameters are infinite.

Now, look at the figure below: 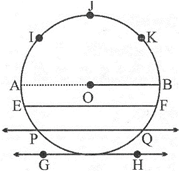