This lesson will help you to:—

We are surrounded by numbers in each & every sphere of our life. Large numbers are often used in monetary transactions in businesses, banks etc. Total number of schools in a city, total numbers of students in a big school is all examples of large numbers.

A census officer visited Rohan's home. He was confused why she is asking so many questions. He was really curious & asked his father all about census. His father told him that census is the process to count & record all the information of the population of a country.

Rohan says that population of the whole country must be a very big number. His father told him that for this you will have to learn about large numbers.

Let us all learn about large numbers.

Let us have a look at the table given below:

The numbers given in the above table are based on the Indian system of numeration.

As the number increases it becomes larger and larger.

Have a look at the place value chart given below:

The place value chart has been separated into three groups:

"The ones period has three places - Hundreds, tens & ones.

Next period is the lakhs period which includes - Ten lakhs & lakhs.

But we will learn ten lakhs in higher classes.

If we write the number without using the place value chart, we use comma to separate the periods.

Let us consider an example:

Here, First comma is used when the ones period is complete.

Second comma is used when thousands period is complete.

Next comma is used to separate thousands and lakhs period.

Put commas to separate the periods;

We read a 6 digit number as mentioned below:

Let us learn to write a number in its expanded notation form. Look at the table given below: 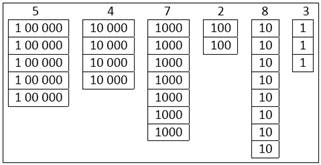 This table can be summarized as follows;