A noun is the name of a person, place or thing, etc. 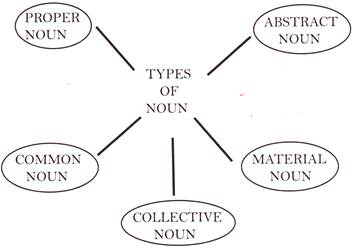 A proper noun is the name of some particular person, place or thing.

Ashoka was a wise king. Here, Ashoka is the proper noun.

A common noun is a name given in common to every person or thing of the same class or kind.

The boy plays in the playground. Here, boy is the common noun.

A collective noun is name of a number of person or things taken together.

There was a great crowd. Here, crowd is the collective noun.

A material noun is the word used for the substance of which things are made.

For example: Brass is yellow. Here, brass is the material noun.

An abstract noun is usually the name of a quality, action, or state considered apart from the object to which it belongs.

I remember my childhood. Here, childhood is an abstract noun.

A pronoun is a word which is used in place of a noun.

I am young. Here, I is a personal pronoun.

They are used for asking questions.

Whose is this book? Here, whose is interrogative pronoun.

Reflexive Pronouns are used when an action done by the subject turns back (reflects) upon the subject itself.

I hurt myself. Here, myself is reflexive pronoun.

It shows the noun in the sentence.

This book is mine. Here, this is demonstrative pronoun.

It refers to persons or things in a general way.

One hardly knows what to do. Here, one is indefinite pronoun.

They refer to persons or things one at a time.

These horses cost five thousand rupees each. Here, each is distributive pronoun.

It refers or relates to some noun introduced earlier.

I met Hari who had just returned. Here, who is relative pronoun.

The pronoun which is made up of two pronouns and shows a relation.

The girls helped one another. Here, one another is the reciprocal pronoun.

A verb is a word or a group of words that expresses action, feeling or existence.

Without using an object this verb completes the meaning of sentence.

For example: The baby sleeps.

This verb needs object to complete the meaning of sentence.

The verb requires a word to make the sense complete.

It is a helping verb.

For example: Ibrahim is writing a book.

You have spoken the truth.

The words 'a', 'an' and 'the' are called articles. They come before nouns.

The articles a, an and the are further divided into two parts. They are the following:

'A and an' are called indefinite articles, because they do not refer to any particular person, place, animal or thing.

A doctor; here a doctor signifies to any doctor and not a specific one.

Use of Indefinite Articles A and An

'A' is used before a singular countable noun beginning with consonant.

In the above given sentences, 'a' has been used before the nouns- teacher, girl, pen and car. These are single countable nouns beginning with consonant letters.

'A' is also used before a singular noun beginning with vowel letter but sounds like a consonant.

In the above given sentences, 'a' has been used

These words, though begin with vowel letters, their sounds are like consonants. 'An' is used before a singular noun beginning with a vowel letter.

In the above given sentences, 'an' has been used before 'Indian', 'umbrella', 'apple' and 'owl'. All of these words begin with vowel letters.

'An' is also used before a singular noun beginning with consonant letters but sounds like vowel.

In the above given sentences, 'an' has been used before 'S.P.', 'hour', 'M.L.A.' and 'M.P.' These words though begin with consonants but sound like vowel.

'The' is called definite article, because it refers to

Use of Definite Article 'The'

It is used when we talk about a particular person or thing, or one already referred to:

It is used when a singular noun is meant to represent a whole class:

Or we may say, 'Cows are useful animals.'

The two nouns 'mm and 'woman' can be used. in a general sense without either articles,

It is used before some proper names. For example:

It is used before the names of certain books. For example:

Before names of things unique of their kind. For example:

Note: Sometimes 'the' is placed before a Common noun to give it the meaning of an Abstract noun.

For example: At last the warrior (the warlike or martial spirit) in him was thoroughly aroused.

It is used before a Proper noun when it is qualified by an adjective or a defining adjectival clause. For example:

It is used with Superlatives. For example:

It is used with ordinals. For example:

It is used before musical instruments. For example:

It is used before an adjective when the noun is understood. For example:

It is used before a noun (with emphasis) to give the force of a Superlative. For example:

It is used as an Adverb with Comparatives. For example:

(= by how much more, by so much the merrier)

It is used in its original numerical sense of one. For example:

It is used in the vague sense of a certain. For example:

It is used in the sense of any to single out an individual as the representative of a class.

To make a common noun of a proper noun. For example:

A preposition is a word placed before a noun or a pronoun to show its relation to some other word in the sentence.

Look at the following sentences:

Prepositions are of three types:

Some simple prepositions are:

Some compound prepositions are:

about, across, among, betzveen, beside,  before, etc.

Some phrase prepositions are:

according to, in spite of, on account of, in front of, in order to, for the sake of, by means of, with

reference to, in addition to, due to, etc.

A conjunction is a word that joins words, phrases, clauses and sentences together.

Look at the use of conjunctions in the following sentences:

The words till, that, or, if, and, because, although, but are conjunctions in these sentences.

If there is a relation with the person then we use the possessive case. We often use ?s? instead of using an ?of? phrase.

For Example: Germany's economy or the economy of Germany

When using the possessive case with a time, ?s? is added.

Look at the following sentence:

This is the doll of Rita.

After using Possessive the sentence will become: This is Rita's doll.