Reading comprehension is an essential part of any test of English language. In this, a passages is given. You have to read the passage carefully and answer the questions based it.

Read the passage carefully and answer the   questions that follow:

If you decide to become a paleontologist you would study plants and other organisms that lived in pre-historic times. That would be a time more than 5,500 years ago.

Someone might ask how one could study something that is lost and gone. The answer is, by studying fossils.

A fossil is the mark, imprint or remain of a plant or an animal left in sedimentary rocks.

A fossil is formed after its marks or remains get buried in the mud or sand which is collected at the bottom of rivers, lakes or seas. With time, the weight of the upper layer presses down on the lower layers and turns it into rock.

Paleontologists study fossils to understand how a plant or an animal has changed over the year. They do this by comparing the fossils to what is alive today. But some plants and animals, like the dinosaurs, are not alive today. That makes a paleontologist's job extremely difficult. They have to make sense out of a fossil in much the same way as you would with a jigsaw puzzle. To do this, they also need to understand whether the rocks were formed under the sea or land. They are experts at telling the age of rocks.

If you decide to become a paleontologist, you would be of great help to your country in locating oil reservoirs. Oil is often found in rocks that contain certain fossils. Oil companies use such fossils as clues to locate oil reservoirs.

(a) the lower layers turn into soil

(b) the upper layers turn into soil

(a) makes sense out of a jigsaw puzzle

(b) makes sense out of a dinosaur

(c) makes sense out of a fossil

(a) telling the age of rivers

(b) telling the age of oil

(c) telling the age of sand

(d) telling the age of rock

Read the passage carefully and answer the questions that follow:

The origin of the art of writing can be associated with the time when primitive people began drawing pictures on the walls of caves. The primitive artist was probably bored and needed to express himself/herself. Later, their pictures developed into messages for others to read. By around 1500 BC the first alphabet was invented and 500 years after that Hebrew, Cyrillic, Arabic and Greek became well-established languages. 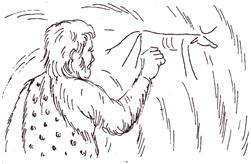 Different countries around the world use different material to build their houses. The first home was made in a cave because that was the only available shelter known to man.

Gradually, man started using wood and mud where it was freely available. The Eskimos still use ice blocks to build igloos and plaster it with water as that is the only material available to them. It also surprisingly keeps out the cold! In many parts of Africa, mud is used as it is a cheap building material and keeps the homes cool.

The Bedouin, or nomads, use camel hair to weave them into tents. Finally, cities use concrete to make tall buildings so that they can be built high and strong and accommodate many people in a small space. People used, and still use locally available building materials keeping the climate in mind when they build their homes.

(a) Primitive people began to write.

(b) Primitive people started to draw.

(c) Primitive people sent messages to each other

(d) The first alphabet was invented.

(a) a wooden house

(c) a mud and wood house