Minor planets in the solar system that are made up of rocks is known as asteroid. These are found circling between Mars and Jupiter.

It is also known as shooting star, made up of rock and metal. This is formed when meteoroid enters the earth's atmosphere and burns up. It is seen as a streak of light in the sky.

Look at the following picture of Meteors:

Some interesting Points about the Space Exploration

Yuri Gagarin from Russia was the first person to go into the space, in Vostok 1.

Laika a dog was the first living organism to go into the space.

Valentine Tereshkova from Russia was the first woman to go in to the space.

Neil Armstrong was the first person to set foot on the moon. Edwin Aldrin and Michael Collins were with him.

Look at the following picture, an astronaut walking on the surface of the moon: 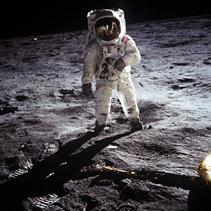 Between which two planets, asteroid belt can be found?

(a) Venus and Earth

(b) Mars and earth

There is a wide gap between the orbits of Mars and Jupiter, which is due to the presence of a belt of small rocks and stones. This belt is known as asteroid belt. Therefore, option (e) is correct and rest of the options is incorrect.

Name the first dog which went into space.

Laika was the name of the dog that went into space. Therefore, option (c) is correct and rest of the options is incorrect..