We all Need to Travel: We use different vehicles to travel to different places like:

People in villages use bullock carts to carry loads and for travelling from one place to another. Nowadays. lorry is also used for carrying loads.

(b) Railway transport: Various cities in a country are connected with trains. They carry hundreds of people at one time from one city to another. Cities such as Delhi, Kolkata, Bangalore and Mumbai also have metro trains. They carry people within the city from one place to another in very less time.

2.            Water transport; Vehicles such as boats, ships, submarines and steamers that run in water are means of water transport. Boats and ships carry people and goods from one place to another. Boats cover short distances while ships travel long distances.

Cargo ships are used to transport tonnes of goods from one country to another. Submarines are used by naval forces. They are sinkina ships, hence they only fit in oceans and seas.

3.             Air transport: Air transport is the fastest means of transport. It includes vehicles such as aeroplanes and helicopters. An aeroplane can carry both people and goods from one country to another over mountains, oceans, land or sea. Helicopters can carry only a few people. They are mostly used by the air force and army to reach dense jungles or high mountains.

Communication: It is a term used to express our thoughts, sending or receiving messages from one person to another. Communication is of two types-

(1)          Postal communication; Letters are the oldest way of written communication. Every city and most of the villages in our country have post offices. We can buy inland letters, postcards and stamped envelops from there. Aerogrammes are used to send letters abroad. We can send money through money orders and parcels to our friends and relatives from one place to another. Letters are sent to the destinations by road, air or ship. 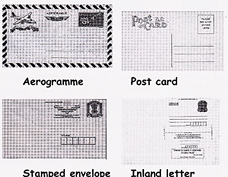 (2)          Telephones: A telephone is the quickest and most convenient means of communication. We can talk to a person by dialing his/her phone number. We need to dial numbers with their STD codes, if we are calling to different states. For example, if we want to call our grandfather from Uttar Pradesh to Delhi, we will dial Oil as Delhi's STD code.

(a) Newspaper and Magazines: Newspaper carries news and articles from all over the world. It makes us aware about what is happening all around the globe. Magazine carries articles and illustrations on few particular topics. Newspapers and magazines are printed in different languages.

(b) Internet; Internet is a fast and reliable means of communication. It has brought the whole world to a small work place. E-mails can be used to send information to any part of the world through internet connectivity. It is one of the fastest means of communication known today. We can also surf information about almost everything on the internet. For surfing information, two types of internet modems? WiFi modem and USB modem are used.

(c) Radio and Television: Radio is used only for listening news, songs and other programes but on television programes can be both watched and listened. Movies, news or any other programs that is happening in any part of the world can be watched on television. There are set timings for different programes.\