Terrestrial animals are those that live on the land, either completely or mostly inside burrows; below the surface. 'terre' means earth and terrestrial means ? of the earth?. Terrestrial animals have various features that enable them to live on land. They have legs to walk. They have well- developed sense organs. Their claws and teeth are very sharp which enables them to catch and eat their prey. For example: Rabbit, Cow, Kangaroo, Cat, Dog, Camel. 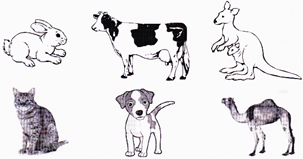 An aerial animal is any creature that spends time in the air typically in flight. Their bones are light and hollow to make their movement easy in the air. They fly with the help of wings For example, birds and insects.

Birds have feathers, a beak and no teeth. They eat fruit, nuts plants, seeds, nectar and various small animals. Do you know that birds also talk to each other and also give signals to their friends? You must have heard the voices of parrots, crows and cuckoos. Some parrots (Macaw) are known to copy our voices.

You must have seen many flies, mosquitos, ants, wasps and grasshoppers at various places in your surroundings. These are all insects. Insects are the most diverse groups of animals on earth. They are found in nearly all environments. Some of these insects can crawl, for example, ants, some can fly, for example, bees and wasps. Have you ever been stung by a wasp? The wasp sting is very painful. You should immediately rush to the doctor in such cases.

Arboreal animals live and dwell in trees. These animals consider trees to be their home base and find shelter, food and protection from the branches. For example. Monkey Lizards etc.

Amphibians are a class of animals that spend part of their life on land and part in water. They breathe through their moist skin when in water and through lungs when on and. For example, Frogs.

ANIMALS CAN BE FURTHER DIVIDED INTO

Pet Animals: Pets are the animals that people keep in or around their homes. They include dogs, cats, rabbits and various species of fishes and birds.

Domestic or Farm Animals; Domestic animals are the animals that people keep in their farms or factories for their fur, feathers, milk or meat or perhaps for transportation. They include farm animals, such as cattle, horses, sheep, chickens, bullocks, elephants, etc. Some insects, such as bees and silk moths are also domesticated.

Wild Animals: Wild animals are those who live in jungle. These animals are naturally ferocious, unpredictable and dangerous. If they are captured and put in a zoo, they become zoo animals. For example, lion and tiger.

ANOTHER WAY TO CATEGORIZE ANIMALS

1.            Herbivorous animals are those that mostly feed on grasses, leaves and grains. They have flat, broad, front teeth to cut the leaves and grasses and chew the food with the help of strong back teeth. Some examples are cow, sheep and camel.

2.            Carnivorous animals are those animals that hunt and eat other animals for food. Carnivores have long, sharp pointed front teeth for tearing and ripping flesh. Some examples are lion, tiger, leopard, etc.

4.            Parasites: There are one more group of animals like bacteria, virus, protozoa, etc. Some of them live inside or on the bodies of other animals and obtain its food from them. They are called parasites.

5.            Scavengers: Animals that feed on flesh of dead animals rather than hunting fresh meat for themselves are called scavengers.

Adaptations are special characteristics and mechanisms that animals have developed over the years to help them survive in a particular environment.

Few examples of the basic adaptations that help the creatures survive are: 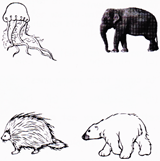