(2) Birth rate or Natality : The birth rate of a population refers to the average number of young ones produced  by birth, hatching or germination per unit time (usually per year). In the case of humans, it is commonly expressed as the number of births per 1000 individuals in the population per year.

The maximum birth rate of a species can achieve under ideal environmental conditions is called potential natality. However, the actual birth rate under the existing conditions is much less. It is termed realised natality.

(i) Diagonal curve : If death rate of different age group organism are equal then the curve is represented or plotted as a straight line.

Example : Men, rabbit and many mammals.

(iii) Concave curve : This kind of curve most found in such organism who die before their potential life spawn. 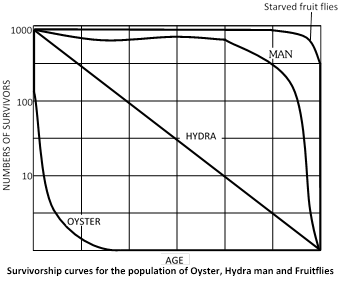 (5) Vital index : The percentage ratio of natality over mortality is known as vital index i.e. natality / mortality \[\times 100.\] It determines the growth of a population.

(6) Immigration : It is permanent entry of additional person into the existing population of a country or region from out side. Example; Many Nepalese and Chinese come to settle in India.

(7) Emigration : It is the permanent departure of some persons from the existing population of a region to a different state or a foreign country. Example; Many Indians go to Western countries to settle there.

Immigration and emigration bring about redistribution of population, and are common in animals. These occur for various reasons, such as search for food, escape from competition due to overcrowding, need of shelter etc.

(8) Sex ratio : The number of females in a population per 1000 males is called sex ratio. 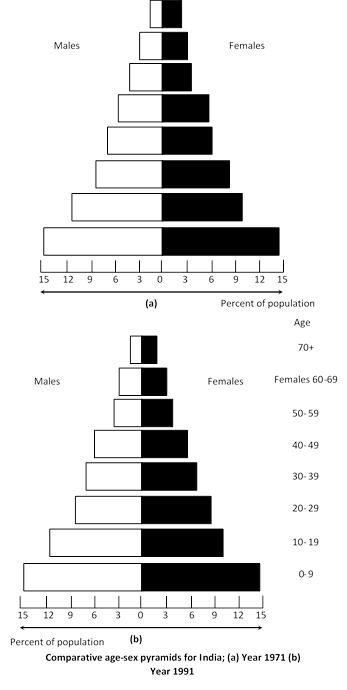 (i) Rapidly growing or Expanding population : It has high birth rate and low death rate, so there are more number of young individuals in the population.

(ii) Stationary or stable population : It has equal birth and death rates, so population shows zero population growth. The pyramid of this type of population is ‘bell’ shaped.

(iii) Declining population :  It has higher death  rate than birth rate, so the population of young members is lower than that of old members e.g. Japan (Ageing population). The pyramid of this type of population is ‘urn’ shaped.

(i) Number of infants below one year of age and the older people as these have higher mortality rate than individuals of other age groups.

(ii) Proportion of reproductive active males and females in a population.

(iii) Number of females in active reproductive age (i.e. between 15 to 44 years)

(11) Change in Population Size and Growth Rate : Whether a population grows, declines or maintains it size depends upon the balance between the above factors:

The above expression in words may be represented in a simple way by a mathematical model. suppose \[N=\]population size and t = time. The Greek letter delta, \[\Delta ,\] indicates change. We can now represent change in population as \[\Delta N,\] and time interval as \[\Delta t.\] The verbal equation can be written as \[\Delta N/\Delta t=(B+I)-(D+E)\] in which B is absolute number of births in the population during the time interval, and D =the absolute number of deaths during that interval; I means immigrant and E, emigrants. I and E , being insignificant, may be ignored. Then the equation simplifies to \[\Delta N/\Delta t=B-D.\]

Migration is a two-way movement of a population for adjusting to seasonal changes. It occurs in some fishes (Anguilla, an eel), birds (Siberian crane), and mammals (fur seal). Migration is not considered a determinant of population size.

Annual average growth rate is the percentage of increase in population size per year. It can be calculated with the help of following equation:

\[N=\]Number of years between the two census.