Major advancements in the medical sciences have been the development of new imaging techniques that provide detailed pictures of internal organs.

(i) Following their discovery by Wilhelm Roentgen, a German physicist in 1895, X-ray became an important tool for medical diagnosis.

(ii) X-ray are a form of electromagnetic radiation of extremely short wavelength.

(iv) This causes shadows of variable intensity to be cast on a photographic film.

(v) X-rays cause no sensation when passed through body tissues.

(vi) Large or frequent radiation doses may damage the skin and internal organs and may cause cancer in later life.

(vii) The study of X-rays for detection and treatment of disease is called radiology.

(viii) X-ray imaging in the simplest form is commonly employed for diagnosing diseases of the heart, lungs and detection of bone and joint injuries.

(ix) Nowadays, the risk involved in having X-rays is extremely small; radiation doses are kept to a minimum.

(ii) This technique combines the use of X-rays with computer technology to produce a two or three-dimensional clear cross-sectioned image of an area.

(v)  Another advantage of CT scanning is that it tends to minimize the amount of radiation exposure.

(vi) CT scanning can be used to obtain images of any part of the body.

(vii) CT scanning helps in the diagnosis of diseases of brain, spinal cord, chest and abdomen.

(viii) This technique is also extremely useful in detecting tumour and monitoring the extent of their spread to surrounding tissues and organs. 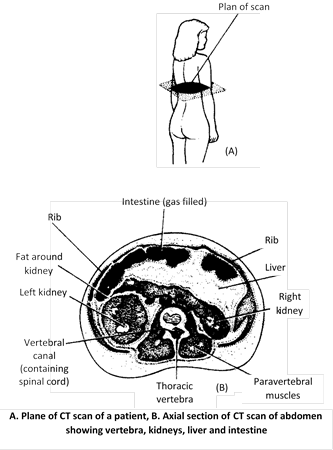 (i) PET scanning was developed by Louis Sokoloff of USA in 1985.

(ii)   PET is a diagnostic technique based on detection of positrons (positively charged electrons) emitted by radio isotopes such as carbon 11, nitrogen 13 or oxygen 15 generated by the cyclotron.

(iii)  These radio isotopes are then incorporated by chemical methods into biological molecules such as glucose, amino acids, carbon dioxide and ammonia.

(iv) These positron emitting compounds are injected into the blood-stream and are taken up in greater concentration by areas of tissues that are more metabolically active.

(vii) PET scanning is used for detecting tumours, for locating the origin of epileptic activity within brain and for examining brain function in various mental illnesses.

(i) MRI was originally discovered in 1946 independently by Felix Bloch and Purcell in USA.

(ii) MRI is a diagnostic technique that provides high-quality cross-sectioned or three-dimensional images of organs and structures without using X-rays or other radiation.

(iii)  This technique exploits the natural behaviour of the protons (nuclei) of hydrogen atoms when they are subjected to a very strong magnetic field and radio waves.

(iv) The most abundant source of protons in the body are hydrogen atoms in water molecules.

(v) An MRI scan reflects differences in the water content of tissues.

(vi) A newer application of MRI known as Nuclear Magnetic Resonance spectroscopy (NMR) relies on the detection of other chemical elements such as phosphorus and calcium.

(vii) The patient lies down surrounded by massive electromagnets and is exposed to short bursts of powerful magnetic field and waves.

(ix) The signals are detected and analyzed by a computer to create an image of a “slice” of the patient's body.

(x) In imaging NMR is superior to CT scanning; it generally gives much greater contrast between normal and abnormal tissues, it is free from radiation hazards and images can be obtained in any plane unlike CT, which is restricted to cross-sectional imaging.

(xi) There are no known risks or side effects of MRI.

(xii) MRI is a costly test that is not yet widely available.

(xiii) MRI is especially useful in studying brain and spinal cord. It can clearly differentiate between white and gray matter. 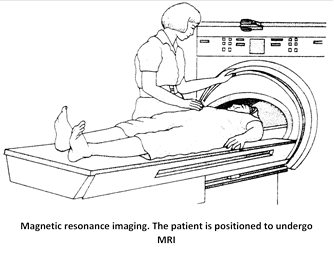 (i) This is also known as echography or sonography and uses inaudible high-frequency sound waves in the range of 1-15 million hertz.

(ii) Ultrasound waves are produced by the piezoelectric effect when an electric potential is applied to crystals of lead zirconate.

(iii) Ultrasound waves are emitted by a device called a transducer which is placed on the skin over the part of body to be viewed.

(iv) The transducer contains the crystals of lead zirconate that converts an electric current into sound waves.

(v) The transducer crystal is made to oscillate back and forth.

(vi) Some of the waves are reflected at tissue boundaries, so a series of echoes are returned.

(vii) The transducer also acts as a receiver, converting these echoes into electrical signals, which are processed and displayed on a screen of a monitor to give a two-dimensional image.

(ix) Ultrasound has wide applications in medicine and is especially useful in obstetrics.

(x) This technique offers no known risk to the baby and is often performed at about 16 to 18 weeks to reveal multiple pregnancy and foetal abnormalities like anencephaly and spina bifida.