We know that every living organism have a certain life span and it dies after sometime. So new organisms have to be produced in place of the dead organisms. Thus, the production of new organisms from preexisting organisms of the same species is known as reproduction. The reproduction ensures the continuity of life on earth. It gives rise to more organisms with same basic characteristics as their parents. Organisms look similar, because their body designs are similar. If the designs are to be similar, the blue prints for these designs should be similar. Thus, the reproduction at its most basic level will involve making copies of the blueprints of body designs. The DNA in the cell nucleus is the information source for making proteins. If the information is changed, different proteins will be made which eventually lead to altered body designs. Therefore, a basic events in reproduction is the creation of a DNA copy.

Cells use the chemical reactions to build copies of their DNA. They create two copies of the DNA in a reproducing cell which need to be separated from each other. However, keeping one copy of DNA in the original cell and simply pushing the other one out would not work, because the copy pushed out would not have any organized cellular structure for maintaining life processes. Therefore, DNA copying is accompanied by the creation of an additional cellular apparatus. The DNA copies separate, each with its own cellular apparatus, effectively, a cell divides to give rise to two cells.

In this methods single organism divides to form two new organisms. For example, the organisms like amoeba, paramecium, bacteria reproduce by this method.

In this method, the parent organism splits to form many new organism at the same time. For example, plasmodium reproduce by this method.

In this method, a small part of the body of the parent organism grows out as a 'bud', which get detached after sometime and developed as a new organism. The organism like Hydra and yeast reproduce by this method. 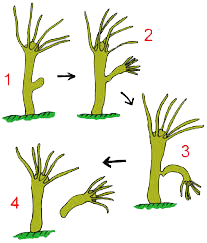 In this method parent organism produces hundreds of microscopic reproductive units called 'spores'. When the spore case of the plant burst, then the spores spread into air. With the favorable condition, these spores germinates to develop into the new plants. 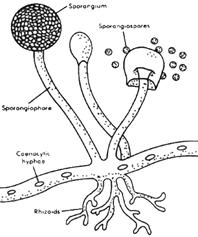 In this method, some small part of the body of the organism is cut and separated. This part grows to form whole new organisms. For example, planaria reproduce by this method. This method of reproduction is not possible for the complex multicellular organism. It can be used to reproduce only those organisms which have relatively simple body design, consisting of only few specialized cells. 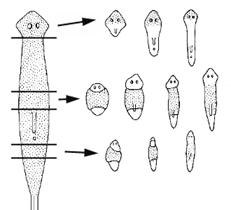 In this methods the body of simple multicellular organism breaks up into several pieces. On maturing, each pieces develops into complete new individual organisms. For example, Spirogyra and sea anemones reproduces by this methods.

In this method, new plants are grown from the parts of the plants. Either of the stem, roots, leaves etc. develops roots on favorable conditions, and grows into a new plants. For example, Bryophyllum plants can reproduce by a piece of its stem or its leaves. The leaves of the bryophyllum when falls on the ground have special types of buds, which produces new roots and develops into new plants. 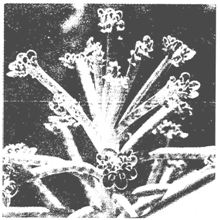 Many other plants like money plant, potato tuber, guava, onion, banana etc. reproduce by this method. 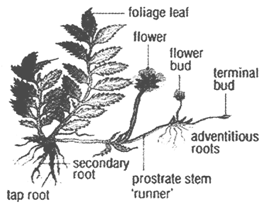 The male or female sex cell is called:

Which one of the following reproduce by spore formation?

A sexual reproduction through budding takes place in: