Flowering plants are the dominant plant form on land and they reproduce by sexual and asexual means. Often their most distinguishing feature is their reproductive organs/ commonly called flowers. The anther produces male gametophytes, the sperm is produced in pollen grains, which is attached to the stigma on top of a carpel, in which the female gametophytes are located. After the pollen tube grows through the carpel's style, the sex cell nuclei from the pollen grain migrate into the ovule to fertilize the egg cell and endosperm nuclei within the female gametophyte, in a process termed double fertilization. The resulting zygote develops into an embryo, while the triploid endosperm i.e. one sperm cell plus two female cells and female tissues of the ovule give rise to the surrounding tissues in the developing seed. The ovary, which produced the female gametophyte, grows into a fruit, which surrounds the seed. Plants may either self-pollinate or cross-pollinate. No flowering plants like ferns, moss and liverworts use other means of sexual reproduction. 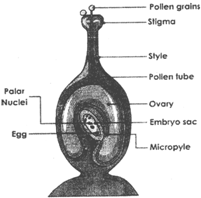 The male reproductive system contains two main divisions: the penis, and the testicles, where the sperm are produced. In humans, both of these organs are outside the abdominal cavity, but they can be primarily housed within the abdomen in other animals, for instance, in dogs, the penis is internal except when mating. Having the testicles outside the abdomen best facilitates temperature regulation of the sperm, which require specific temperatures to survive. Sperm are the smaller of the two gametes and are generally very short- lived, requiring males to produce them continuously from the time of sexual maturity until death. Prior to ejaculation the produced sperm are stored in the epididymis. The sperm cells are motile and they swim using tail-like flagella to propel themselves towards the ovum. The sperm follows temperature gradients and chemical gradients to locate the ovum. 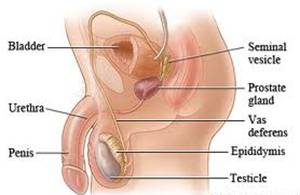 If, in this transit, it meets with sperm, the egg selects sperm with which to merge; this is termed fertilization. The fertilization usually occurs in the oviducts, but can happen in the uterus itself. The zygote then implants itself in the wall of the uterus, where it begins the processes of embryogenesis and morphogenesis. When developed enough to survive outside the womb, the cervix dilates and contractions of the uterus propel the fetus through the birth canal, which is the vagina. 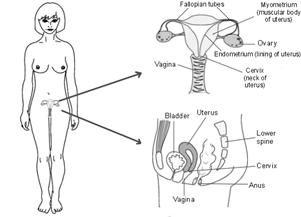 The ova, which are the female sex cells, are much larger than the sperm and are normally formed within the ovaries of the fetus before its birth. They are mostly fixed in location within the ovary until their transit to the uterus, and contain nutrients for the later zygote and embryo. Over a regular interval, in response to hormonal signals, a process of oogenesis matures one ovum which is released and sent down the Fallopian tube. If not fertilized, this egg is released through menstruation in humans and other great apes, and reabsorbed in other mammals in the estrus cycle.

Gestation, called pregnancy in humans, is the period of time during which the fetus develops, dividing via mitosis inside the female. During this time, the fetus receives all of its nutrition and oxygenated blood from the female, filtered through the placenta, which is attached to the fetus' abdomen via an umbilical cord. This drain of nutrients can be quite taxing on the female, who is required to ingest slightly higher levels of calories. In addition, certain vitamins and other nutrients are required in greater quantities than normal, often creating abnormal eating habits. The length of gestation, called the gestation period, varies greatly from species to species; it is 40 weeks in humans, 56-60 in giraffes and 16 days in hamsters.

Once the fetus is sufficiently developed, chemical signals start the process of birth. This begins with contractions of the uterus and the dilation of the cervix. The fetus then descends to the cervix, where it is pushed out into the vagina, and eventually out of the female. The newborn, which is called an infant in humans, should typically begin respiration on its own shortly after birth. Not long after, the placenta is passed as well. Most mammals eat this, as it is a good source of protein and other vital nutrients needed for caring for the young. The end of the umbilical cord attached to the young's abdomen eventually falls off on its own.