When we speak or write we used words. We generally use these words in group as for example-

A group of words, which makes complete sense, is called a sentence.

There are mamly five kinds of sentences.

1.         Assertive sentence: A sentence that states or declares something is called an assertive or declarative sentences.

For example: What time did you come?

For example: How beautiful the flower is!

For example: May God bless you!

1.    My father goes for a morning walk daily

6.    He will arrive here next Monday 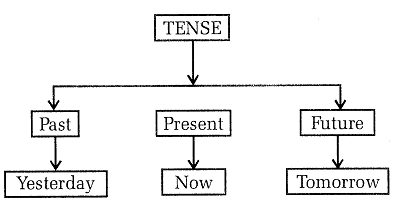 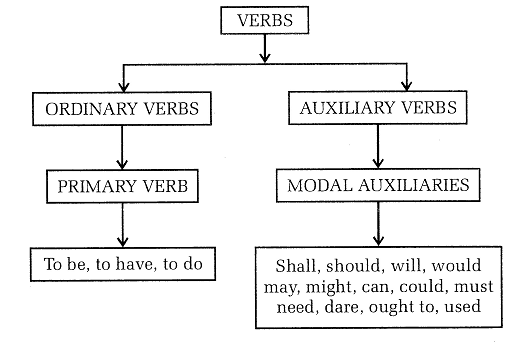 Now try to understand the difference between the two categories of Auxiliaries.

3. May stand alone or used with main verb

4. Changing form according to the number and person of the subject

5. Help the main verb to convey the different types of actions

4. Express a wide variety of meanings

5. Their form remains unchanged in spite of number and person of subject

Look at the sentence given below:

1. A letter was written by Aditi.

The passive voice occurs in both spoken and written English and it is used very frequently in technical writing. Most verbs that take an object can be used in the Passive Voice. In sentences in the Active Voice, the primary focus is on the subject. To give primary focus to the object of the sentence, the sentence can be changed to the Passive Voice.

(b) The door was closed by somebody.

(b) The house is cleaned daily by the maid.

(b) Past participle form (V3) of the main verb.

(e) ?By? or some other preposition is placed before the subject (doer/agent) in the Active voice.

A verb must agree with its subject in number and person.

(a) The quality of the mangoes is not good.

(b) His knowledge of Indian Vernaculars is far beyond the common.

(a) Gold and Silver are precious metals.

But if the nouns suggest one idea, or refer to the same person or thing, the verb is singular:

(a) Bread and butter is his only food.

(b) The novelist and poet is dead.

(a) The house, with its contents, was insured.

(b) Justice, as well as mercy, allows it.

(a) No nook or corner was left unexplored.

(b) Either the cat or the dog has been here.

But when one of the subjects joined by 'or' or ?nor? is plural, the verb must be plural, and the plural subject should be placed nearest to the verb:

(a) Neither the chairman nor the directors are present.

(a) Either he or I am mistaken.

(b) Neither you nor he is to be blamed.

(b) All of the prison is full.

(c) Each of these substances is found in India.

(d) Neither of the two men was strong.

(a) Every girl was given a packet of sweets.

(b) The wages of sin is death.

9.            ?Pains? and ?means? take either the singular or the plural verb but the construction must be consistent:

(a) Great pains have been taken.

(b) Much pains have been taken.

(a) According to the present market rate twelve dozens cost one hundred rupees.

(a) None are so deaf as those who will not hear.

12.          A collective noun takes a singular verb when the collection is thought of as one whole:

(a) The committee has issued its report.

13.          When a plural noun denotes some specific quantity or amount considered as a whole, the verb is generally singular:

(a) Ten kilometers is a long walk.

(b) Fifty thousand rupees is a large amount.

Look at the following diagrams: 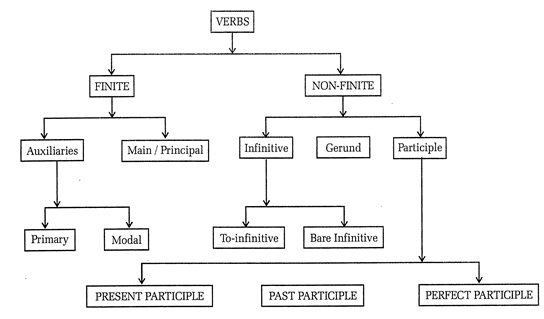 (b) We kept waiting for Jane last night.

(c) I got back my stolen watch.

(d) Having finished her work, the maid left the house.

(e) The teacher didn't let us play in the classroom.

?Waiting? in (b) is gerund. 'Stolen' in (c) is past participle while 'having finished' in (d) is perfect participle forms:

Connectors are the words that are used to join or connect single words, phrases, clauses or sentences. Words such as and, but, or, so, yet, still are connectors. For example-

Slow and steady wins the race.

He is rich but unhappy.

Words like- while, whereas, either, neither, though, therefore, both, only, although also come in this category.

A phrase is the name given to the structural element and acts as a level between word and clause. A clause consists of phrases and a phrase consists of words irrespective of their number. A single word acts as the essential element within the phrase. We can call it the head word of the phrase.

Look at the following sentences:

All alone in his study, my father was reading a new book quite slowly. It consists of six phrases:

(ii) The verb phrase - was reading

(iii) The adjective phrase - all alone

(iv) The adverb phrase - quite slowly

(v) The prepositional phrase - in his study

A clause is a group of words that forms a part of a sentence and has a subject and a predicate of its own.

A noun with or without a determiner is called a noun phrase.

The noun clause does the work of a noun. It can function as the subject, object of a verb, complement to a verb/adjective, object of a preposition, in opposition to a noun or pronoun ?it?.

(b) Please listen to what I say

(c) That she is angry is true.

(a) She was very happy

(b) He was extremely overjoyed.

The adjective clause does the work of an adjective describing a noun/pronoun.

(a) Let me know the time when I can see you.

(b) This is the girl who stood first in the examination.

An adverb phrase may contain just one word - an adverb - as its head.

(b) He walked quickly.

We can put other words - adverbs - before the head word.

(b) He walked quite quickly.

What is actually spoken by a person is direct speech. When it is reported later by someone else it becomes indirect speech.

(i) Form of the reporting verb

(i) Reported speech is changed to a noun clause with a full stop at its end. Question mark (?) and sign of exclamation (!) are deleted.

(ii) The form of reporting verb and conjunction depends on the type of the sentence in the Reported Speech.

Determiners signal the coming of a noun, i.e., they are used before a noun or noun equivalent.

(b) Demonstratives - this, that, these, those

(d) Adjectives and pronouns of indefinite number and quantity - some, any, every, each, all, few, many, such, both, enough, one, two, three, etc.

A pronoun is a word which is used instead of a noun. The pronouns which stand for names of person or things are called personal pronouns.

Demonstrative pronouns: This, that, these, those

Distributive pronouns: Each, every, either, neither, everyone, nobody, etc.

Reciprocal pronouns: Each, other, one another

Relative pronouns: Who, which, whose, that

Interrogative pronouns: Who, whom, whose, which, what

Indefinite pronouns: Some, many, any, all, someone, somebody, etc.

(b) He was waiting at the cross-roads.

We can show comparison by changing the form of adjectives. Adjectives have special forms for comparisons. When two parts are compared to an equal degree it is called the positive degree.

(a) Anny's house is as spacious as mine.

When two parts are compared to an unequal degree, it is called the comparative degree. Comparatives can be formed in two ways:

When three or more parts are compared to an unequal degree it is known as superlative degree. This reveals selection of one against all the others. Superlatives are formed by: