Tension Force   When an object is hanged with the help of a rope, a force is transmitted through the rope, called tension force. It always acts along the length of the rope, and is pulled equally on the objects in the opposite direction. Let us consider the surface of water. If you observe the upper surface of water carefully, you will find that, it behaves like an elastic surface. This is because of the fact, that there is intermolecular force of attraction between the molecules of water, which holds the molecules together. This force is called surface tension. 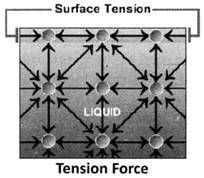 Thomas gently places a coin on the surface of water in the bucket, and finds that it does not sink in the water. It shows that the surface is behaving like a elastic surface. The reason for this behavior of the surface is _________. (a) Nuclear force (b) Electrostatic force (c) Intermolecularforce (d) Gravitational force (e) None of these   Answer: (c) Explanation The surface of water behaves like an elastic surface, because there is intermolecular force between the molecules of water.

David mixes a drop of water in the cup containing mustard oil. He observes that it changes into the shape of a spherical ball. What could be the possible reason for this? (a) Surface tension (b) Viscosity   (c) Density (d) Surface area (e) None of these   Answer: (a) Explanation When the oil is mixed in water, it becomes spherical. It is because of the surface tension between the molecules of the oil drop.

Muscular Force To lift a table from the ground to a certain height, we need to apply a force; or if you want to throw a cricket ball, also you have to apply a force. These forces are exerted by the muscles of our arm or body. The force applied by the muscles of our body is known as the muscular force. The muscular force depends upon the strength of the body or the mass of the object. Human use the muscular force of the animals to do various work. For example, ploughing of the field by an ox, or carrying of loads from one place to another by camels or donkey.

Magnetic Force   A magnet is a material that attracts certain other types of the material towards itself. Such materials are called the magnetic material. For example, the materials like iron, nickel etc are attracted by the magnet. The force that attracts the magnetic material is called magnetic force. The magnet has two poles, north pole and south pole. Like poles repel each other and unlike poles attract each other. If we break a bar magnet into several pieces, each piece will behave like an independent magnet. We cannot separate the poles of the magnet.

Our earth behaves like a huge bar magnetic. All the object falling from a certain height is attracted towards the centre of the earth. The magnetic behavior of the earth is solely due to the certain elements present in the core of the earth. The elements due to which earth behave like a huge bar magnetic is ___? (a) (Ni, Fe)  (b) (Ni, Co)     (c) (Fe, Co)     (d) (Zn, Fe) (e) None of these   Answer: (a) Explanation The element, which is present in the core of the earth and due to which it behaves like a magnet, is Ni and Fe.

Electrostatic Force An electrically charged object exerts force on an uncharged object. Such force is called the electrostatic force. For example, if you rub a plastic comb with your hair and bring the comb near the tiny piece of the paper, the piece of paper will either stick to the comb, or will start moving due the electrostatic force. Similarly, an ebonite rod when rubbed with the woolen cloth, it acquires the negative charge and attracts the tiny piece of paper.

When a plastic comb is rubbed with hair, it acquires some charges due to which it attracts tiny pieces of paper. The types of charge, which the comb acquires form the hair is ____. (a) Positive  (b) Negative (c) α charge (d) β charge (e) more...
Catgeory: 8th Class

Introduction   Light is a form of energy, which produces the sensation of vision. The sense ofsight is one of the important senses that the God has given to the humanbeings. The object, such as, the Sun, the stars, lamps, even lightning bugs,gives off light. They are called luminous bodies (from the Latin word lumen,meaning light). Other objects, such as, trees, grass, keyboard etc. are theexamples of non luminous objects. They are visible only when they receivelight from some luminous sources and reflect it to our eyes. Whether a body is luminous or non luminous, depends much on the nature ofmaterial of which it is made up of. By changing the nature of material, we canmake many familiar objects, both luminous ornon luminous, at will. Thefilament, or fine wire inside an electric light bulb is non luminous, unless it isheated by an electric current passing through it. We can take a piece of ironand make it glow red, yellow, or white by heating it in burning coals or over agas flame. When solid and liquid, such as, melted metals are heated totemperatures above 800 degrees Celsius (about 1500 degrees Fahrenheit), theyturn to be a source of light. Such materials are called incandescent bodies. Wecan, in fact, see any object only when ray of light falls on it and gets reflected..
Catgeory: 8th Class